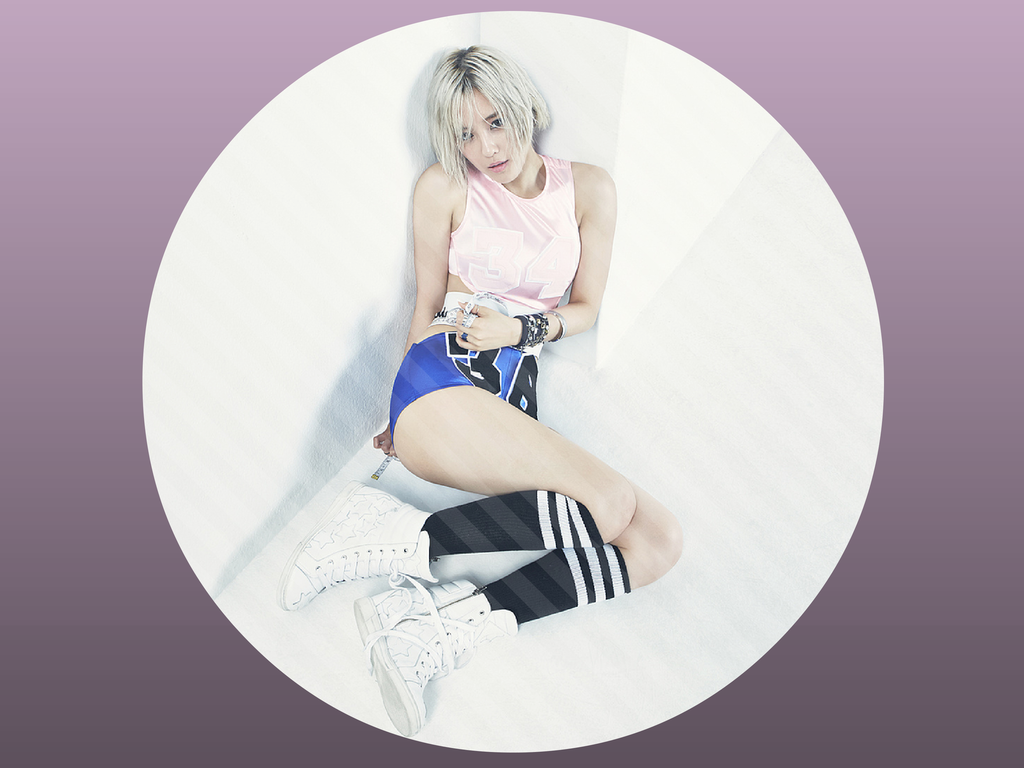 For the past few weeks, Core Contents Media hyped up T-ara member Hyomin’s solo debut with Nice Body like it would be the song of the summer. They said the music video would be rated 15+, while the dance version would be 19+, making fans and the general public’s anticipation grow. Articles on different news sites revealed teaser pictures of Hyomin in a fat suit with prosthetics on her face to look the part. With this, and the song’s title, the first red flag glared. However, everything was still pretty hush hush, so criticism couldn’t surface without knowing the music video’s plot and the song’s lyrics.

But then the video for Nice Body came out last Sunday, raising more red flags than anything else seen in K-Pop in a while. Realistically speaking, the only reason why Nice Body should be rated for people over 19, with its distasteful plot line to its objectifying costume and its absurd lyrics, is because no impressionable youngster should be sold such an offensive message towards women.

The problem starts with the lyrics. While I may not know Korean, I know how to use Google, and Google found for me this English translation of Hyomin’s Nice Body. But where do I even start? The beginning seems to be the best choice:

Ok, ok. This is true. It’s because of the beauty standards and gender roles set by the patriarchal society we live in, but ok, it’s reality.

Obesity is a real problem — I get that. There’s nothing wrong with wanting and trying to be healthy. What’s wrong is when you bring beauty into the equation and say that if you’re skinny, you’ll be pretty and thus, deserving of love. Yes, because gender roles have long established that women’s sole purpose in life is to appeal to men, get married, and have babies. To make matters worse, people glorify these notions by making it news out of what Hyomin ate or didn’t in order to have that nice body.

While I may be getting ahead of myself with this one, it’s important to spot even the littlest references to these sexist gender roles to understand the larger picture. It’s never just about saying skinny is pretty or just about whichever example is the ideal body type, it’s about reinforcing destructive ideas that “put women in their place.”

All guys want a girl like this
All guys like pretty girls
All guys think dirty thoughts at least once
I want that to be me, I want that…
It was so hard for me
You have no idea how much I worked for you
Good style, feel good, smile
I am confident now

As previously stated, women’s purpose in life is not to serve men. It’s 2014, people! We work, and not just as teachers or secretaries; we go to school, where we pursue different sciences. We raise children, sometimes on our own. We lead countries like Argentina, Germany, and, yes, South Korea, for crying out loud! Women should not conform to be a certain way based on what men want.

And while women and men alike are shallow; again, that is only the surface of the problem. The deeper, more embedded issue is when you put it into context, which, up until now, is: “I need to be skinny so guys like me and that way I’ll be worth something.” Do I really need to go into detail about how a woman’s worth is measured? It’s certainly not over how many men fancy you or how small your waistline is.

Speaking of waistlines, let’s address Hyomin’s leotard with different numbers on it. These numbers (34 at the bust, 24 at the waist, and 36 at the hips) are actually inches representing her measurements. Furthermore, at the chorus, she uses a measuring tape as a prop for her little dance. Again, look at the bigger picture; this does not represent Hyomin being comfortable in her body and being proud about it. As if packaging women and selling them in the name of pop wasn’t enough, Hyomin is now reduced to three numbers –to an object — perpetuating the notion that women are sub-human and thus not equal to men. 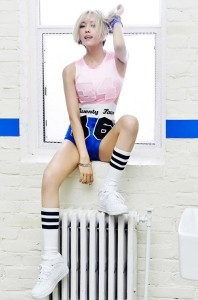 But things get worse with the music video. Hyomin has a nice body, we know that; she makes it very clear. What’s not so clear is her fat suit costume whose sole purpose is to body-shame. Girl, you can have the best, hottest body, have all the guys at your feet telling you you’re beautiful, but how will body-shaming and ridiculing someone who doesn’t look like you serve you?

The scenes were packaged as a joke, something cute and funny, imagine if Hyomin, who has a great body because her only job is to look hot all the time, were to look fat? Omo! That would be funny because she’s not really fat, and fat is funny… I feel like I’m reiterating myself over and over again, but here goes: Look at the bigger picture. A girl whose body meets the beauty standards set by society in a fat-suit singing about a woman’s worth depending on how good she looks like is offensive, to women and men alike. 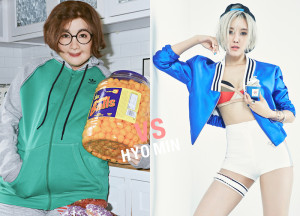 And then we have this little gem. Does the girl in the top picture seem familiar to you? That’s because she starred in the music video for the rape culture appreciation anthem known as Blurred Lines by Robin Thicke. I would say this little tribute is the cherry on top of the sundae, one blatantly offensive music video and song to another. 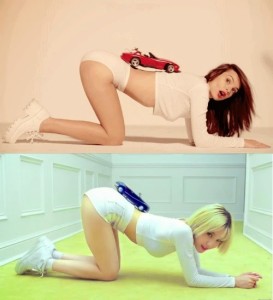 In a world where idols are ostracized over who they date, how sexy their concept is, or if they left their company and bandmates hanging, it’s really fascinating how a song, music video, and concept that offends women and their struggle against sexism goes unnoticed. If netizens have proved something time and time again, it’s that they have the power of taking an idol down; even though I am not calling for this fate for Hyomin, I do wonder where the outcry is for something that actually matters.

Lastly, to take that sour taste out of your mouth, here’s a song by Sunny Hill with a message completely opposite to Hyomin’s. Please enjoy and pick better K-Pop songs.