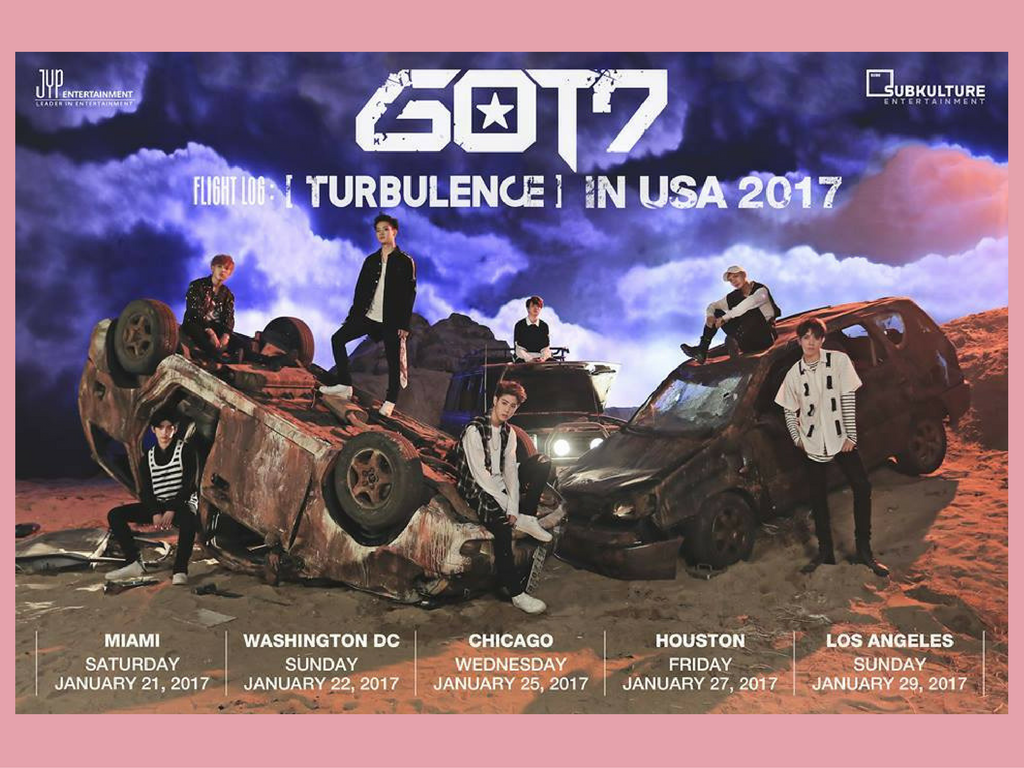 I never knew a fanmeet was an actual thing prior to K-pop because American musicians don’t hold such events. The closest thing to a fan meet in their eyes are those quick interactions they have with the fan(s) (you’d generally have to have bought the VIP perk/upgrade in order to even get that close to them) either prior to or after their show. Also depending on how popular the artist is, it’ll either be whilst at their merchandise table, as you’re buying their cd’s and T-shirts or an “exclusive” one-on-one, “hey how are you? I’m your biggest fan” meet and greet. Of course the actual concerts themselves are always fun; music is the best when it’s live, but there’s something about fan meetings that makes the experience a bit more memorable.

Korean artists — or in this case GOT7 — are all about those fan meets; they’re about getting that “me and my fans” type of time, doing unscripted Q&A’s, and just letting looser. At most concerts, I’m generally found standing (alike all the other attendees), even if there’s seats, but having personally gone to a few fan meetings here in the States (ahem, three GOT7 ones, in fact), the time spent sitting back in your seat and watching your idols also get a chance to sit back is rather satisfying.

Having said that, you could say I know a thing or two about fan meets and how they compare to their shows — especially for GOT7. Luckily, early next year you could have the extraordinary experience of attending one of their fan meets, since the Turbulence in USA Tour is coming to multiple cities in the country. The first stop is in Miami on Jan. 21 at the Fillmore, then it’s DC on the 22nd at Echostage. Next up is Chicago on the 25th at the Rosemont Theatre, then Houston on the 27th at Revention Music Center, and finally Los Angeles on the 29th at the Pasadena Civic Auditorium. Tickets for all shows go on sale on Dec. 17 at 10 a.m. local time, so watch out for those time zones! Prices range from $65 for the cheapest all the way to $205 for VVIP. For more information, follow the organizer’s, SubKulture, website, Facebook, and Twitter.

These upcoming fan meetings on the Turbulence in USA Tour mark the group’s third time holding them in North America since their debut in 2014. And if anything, that goes to show that other than their concerts, these work for them well. And as mentioned earlier, I’ve gone to more than a few of these in the past so I’m here to tell you the scoop of what goes down at these events and why they may be better than a show. Keyword “may,” ok?

Also on KultScene: 5 reasons to watch ‘My Annoying Brother’

These fan meetings aren’t meant for just songs; these shows allow real time artist and fan interactions because it involves both parties’ full and undivided participation. Generally, after every two songs, there’s usually a break for questions from fans for the members, which are usually submitted the weeks leading up to the fanmeet. The Q&A sessions not only give the members a minute to catch their breath, but it’s also for them to give the fans their most genuine answers. Depending on who’s answering what question, there’ll be some sort of a reaction from the crowd and then based off of that, sometimes the members will either elaborate more (possibly telling you more than they should have), or due to embarrassment, might start poking fun at another member and then suddenly it all turns into a big laughing session.

Fan meetings also mean there’ll be time for games. Some of the games are played between the members, where they split themselves up into two teams, usually the hyung-line (older members, Mark, JB, Jackson, and Jinyoung) and maknae-line (youngest members, Youngjae, Bambam and Yugyeom). And then the others are played with some very lucky audience members. When will you ever get to stand next to your bias, within breathing distance, arm in arm, sometimes even hand in hand, other than at a fanmeeting? Although it’s all lottery and pretty much pure luck on whether or not your seat/ticket number is called, once it actually happens, you’ll never be the same. If you are indeed one of the lucky fans to be called up on stage with GOT7, keep in mind that not only are you potentially standing next to your bias in the group, not only is this your very own personal one on one time (you’ll practically be in each other’s personal bubble and you’ll probably forget that there’s hundreds of people in the audience staring on in jealousy because everything will become a blur), but try to remember that those members whom you’ve probably dreamt about having as a imaginary boyfriend, is suddenly right next to you. Yes, right next to you.

Their personalities come across more naturally

As most IGOT7/ahgases (GOT7’s fanclub) already know, Jackson and Bambam are the kings of being extra. But it wasn’t always this way! These two probably always had it in them, but it was only within the last year that they’ve gone above and beyond… unusually over the top. Actually, come to think of it, each member is relatively extra in their own (quiet) individual way. Mark, JB, Jinyoung, and Youngjae are extra but in a rather discreet and sly way, and Yugyeom, well, he’s just a rebel. However, that’s totally fine; it’s what makes them them. It took them a couple of years to break out of their shell but it’s no big deal. Every member of GOT7 has found their groove, stepped into their own element and have figured out what suits them.

These fanmeets have been a great opportunity and I believe a great learning curve for the guys to show to kind of figure themselves out, even if it’s not totally 100 percent right now. These meets are a great platform for them to show off their quirky, goofy and boisterous sides; it’s a great way for the fans to see first hand and understand the members better, which will result in a better connection. With Jackson and Bambam’s love for MCing, you can bet that if even there’s nothing left for the actual MC to say, those two will fill in the silence.

Games seem lame, but they’re not

Do you ever find yourself binge watching every video known to man that your favorite group has ever gone on or been featured on, from music to variety shows and especially the groups’ own web series? On most of these shows, the variety ones especially, there’s always a segment, whether brief or extended, of them playing a game. It can usually range anywhere from a simple game to an extensive game of kai-bai-bo (rock-paper-scissors), girl/boy group dance covers, speed dance challenges, the showcasing of a special (sometimes weird) talent, which would then result in the winner flicking the losers in the forehead or hitting them with a rather hard plastic toy hammer.

Although none of the members have been hit or flicked at any of GOT7’s fanmeets here yet, these guys make sure to bring laughter to the crowd with their mischievous gaming tactics.

For example, instead of playing the typical games that they’re probably all so bored of and used to already, at the group’s recent fanmeets in Vancouver and Toronto this past November, they had the crowd roaring in screams from enjoyment at their onstage gaming shenanigans. The panicked faces they’d make as they’re running away from an inflating balloon, to their quivering hands as they played the “what’s in the box” game is priceless. It’s one thing seeing these games being played and laughing at monitor but it’s on an entire different level when you’re able to laugh at the outcomes, in front of you, as it’s happening in real time.

Although it’s still a day of work for these guys, the “free” moments that they get to sit on stage and converse with the crowd during a fanmeet, are probably the only moments where they’re able to somewhat catch a breather. There’s fewer songs to sing, less choreography to remember, more time to “chill,” even if they’re not actually kicking back on the couch somewhere, it still gives them a little time to rest. Of course, just like any other job, there’s still an urgency to do things a certain way. There are guidelines and rules that they must stick to when performing, but like the name states, fan meetings are meant for the fans. In order for the fans to enjoy, GOT7 needs to also be enjoying it.

Not to say that the members are less strict on themselves at fanmeets, but it does however allow them more freedom. Freedom as in, if they’re doing or saying something that’s apart of the script and suddenly there’s an outburst or some sort of feedback from the crowd, perhaps a fan screaming out “Bambam, dab!” and he does reacts to it by doing so, and the other members follow, they don’t feel the pressure of needing to jump right back into the script. Fan meetings leave room for them to joke around, more than usual, prancing around the stage, acting all sorts of willy nilly, acting like how they probably would back at the dorm.

Just because there’s fewer songs and less choreography doesn’t mean that they don’t try just as hard as they would with a 15 song set, fan meetings help relieve any extra pressure that they might have. And like Bambam and Yugyeom like to say, it allows them to take it “eaaasy”.

I’m sure you’ve all seen photos and fan cams of GOT7’s fan meetings in Asia, especially the most recent promotional ones in Thailand this past summer. Sure, we might not be getting those long eye to eye stare offs as we link fingers type of fanmeets, or the ones where the members are hugging you from the side, back, and all sorts of angles. And as much as overseas fans would love to get that same fan service that some of the Asian countries get, we’re just as grateful for the enjoyable fan meetings and effort that GOT7 always puts in. No, but really. When will that ever happen here and when will my bias and I lock fingers?

Subkulture delivered a successful GOT7 US tour this past summer so we can only expect that the fan meeting in January will be just as entertaining! You’ll probably think I’m being repetitive when I say this, but truly, the memories that you leave a fanmeeting with will linger on and stick with you for a lifetime. Whether this will be your first time attending a fanmeet or maybe you’ve already gone to one, or two… or five, you can expect to leave the venue that night yearning for more of GOT7.