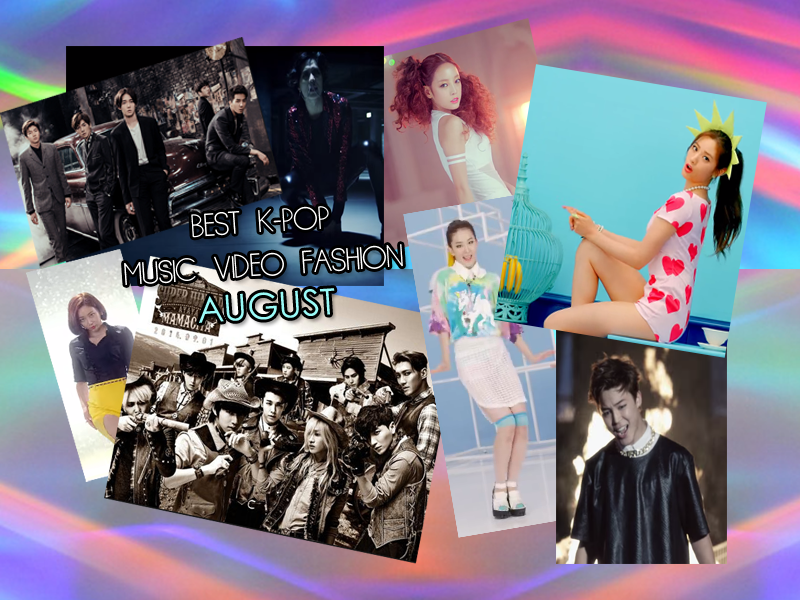 August saw the beginning of long awaited debuts and comebacks in K-Pop. There weren’t that many releases this month, but the few ones that came out were enough. Rookies and veterans delivered not only good music, but also great fashion in their music videos. Let’s take a look at the best fashion in K-Pop’s August releases. 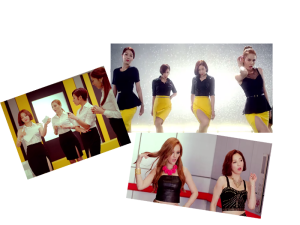 In order for a music video to be considered to have great fashion, it doesn’t necessarily need to be over the top or extravagant. The ladies of Sunny Hill gave us a different style than the ones we are used to in K-Pop music videos: powerful business woman fashion. Pencil skirts, a blouse, and great accessories are really all you need for a great business outfit. Not only do they look powerful, but they also look very sexy. At the end of the video, they change their clothes after a long day of work. The girls are ready to go party! 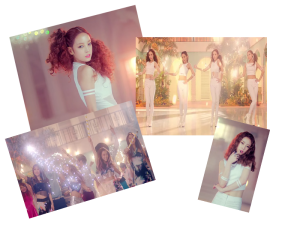 KARA finally had a comeback with a very fun dance song Mamma Mia. The styling in the first part of the video is not an immediate attention grabber. But then they showed the girls in all white outfits, with Hara’s awesome puffy pigtails. Now that’s a cool statement!

Despite their all-white outfits being simple, their hairstyles and makeup are the main protagonists. Their ensembles are variations of the same design, but they are very well coordinated. Later on the video, Kara is coordinated in very trendy outfits with tropical prints which go really well with the song’s fun vibe. 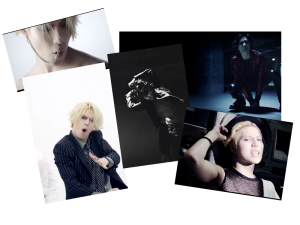 SHINee’s Taemin released his first solo mini-album ACE, and the music video for his debut single, Danger, is fantastic. The song and video are not only homages to Michael Jackson, but the fashion in the video really reminisce the late King Of Pop. Sequence, funky suits, and crazy accessories enhance Taemin’s personality. Every single outfit makes him look very sexy (especially when he is dancing in jeans, a ponytail, and a leather motorcycle jacket with no shirt on). Taemin has surely left his cute maknae image behind in order to become an avant-garde fashionisto bad boy.

BTS has always had amazing styling since their debut. They recently came back with their newest release, Danger, and their fashion didn’t disappoint. Even if we are used to seeing this type of styling in K-Pop boy bands, their personalities really make the outfits stand out. The mix of grunge and ‘90s hip-hop fashion has become BTS’ style staple. They are decked out in Versace shirts and all those accessories are to die for (especially the hats and necklaces). They are not afraid of taking risks in their fashion; J-Hope even wears a skirt over leggings, further probing their fashion forward status. 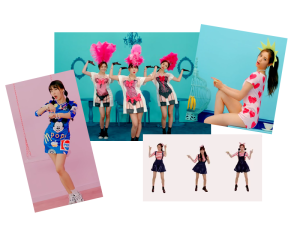 Orange Caramel has always been known for their quirkiness, and their fashion has always been very interesting. Their newest music video, My Copycat, makes you engage and interact throughout the video by spotting differences and finding the girls à la Where’s Waldo?

In the music video, the girls wear really cool dresses, full of iconic cartoon characters like Mickey Mouse and some cute hearts. The styling makes Orange Caramel look really cute, quirky, and cool at the same time. Their styles will also make for awesome fan cosplay in the near future, especially Las Vegas showgirls one. 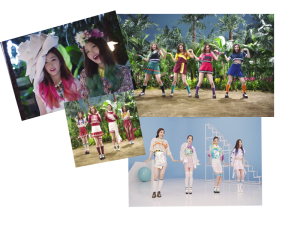 SM Entertainment debuted their newest girl group and it didn’t disappoint. The bubbly song was paired with a fun and colorful music video that went hand-in-hand with amazing fashion. First off, the custom made cheerleader outfits were extremely cute. The stylist made it look a little bit edgier and modern by pairing them with creepers and platform shoes. Red Velvet had different looks throughout the video, but the one that stood out the most only made it into a few shots. They wore a mixture of white, silver, and pink. Unicorns and the mixture of textures in these outfits really made these outfits stand out. They took viewers back to 1996 with this awesome look. 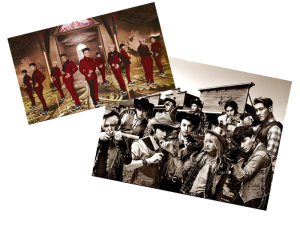 There’s really not that much to say about Super Junior that hasn’t been said already. They are one of the most talented and respected boy bands in K-Pop and they just had a long awaited epic comeback. Super Junior came back with Mamacita this week; a really catchy and fun song that showcases their well-known quirkiness, while also conveying a very manly and sexy image.

The styling for the boys in this music video is excellent. Each member has a different character, and they couldn’t have styled them any better. Who could say no to ten handsome and talented men in red suits? They look super sexy despite their looks being costumes! 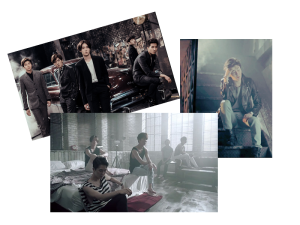 YG Entertainment finally debuted their newest, long-awaited boyband WINNER this month. YG’s attempt to introduce a new type of idol has really made them true winners (they keep winning every music show since their debut). WINNER’s debut song Empty shows the boys with a more mature image. Their whole album had the concept of a fashion show, and the looks didn’t disappoint. The styling is very simple and full of classic pieces like blazers, motorcycle jackets, and jeans, which makes them very relatable to every-day-men (or at least how we would like every-day-men to dress). The styling chosen also make it easier to try to emulate their looks, thus making them more relatable. With their debut, they definitely left their trainee image and became fashionistos.

WINNER’s debut album also includes a solo song by one of their rappers, Song Minho. The song I’m Him is very powerful, and the styling in the video was very nostalgic, because he and the rest of the WINNER members (who make a cameo in the video) are styled like in their trainee days. The styling takes us back to when we were watching WIN: WHO IS NEXT? and we’re barely getting to know them.