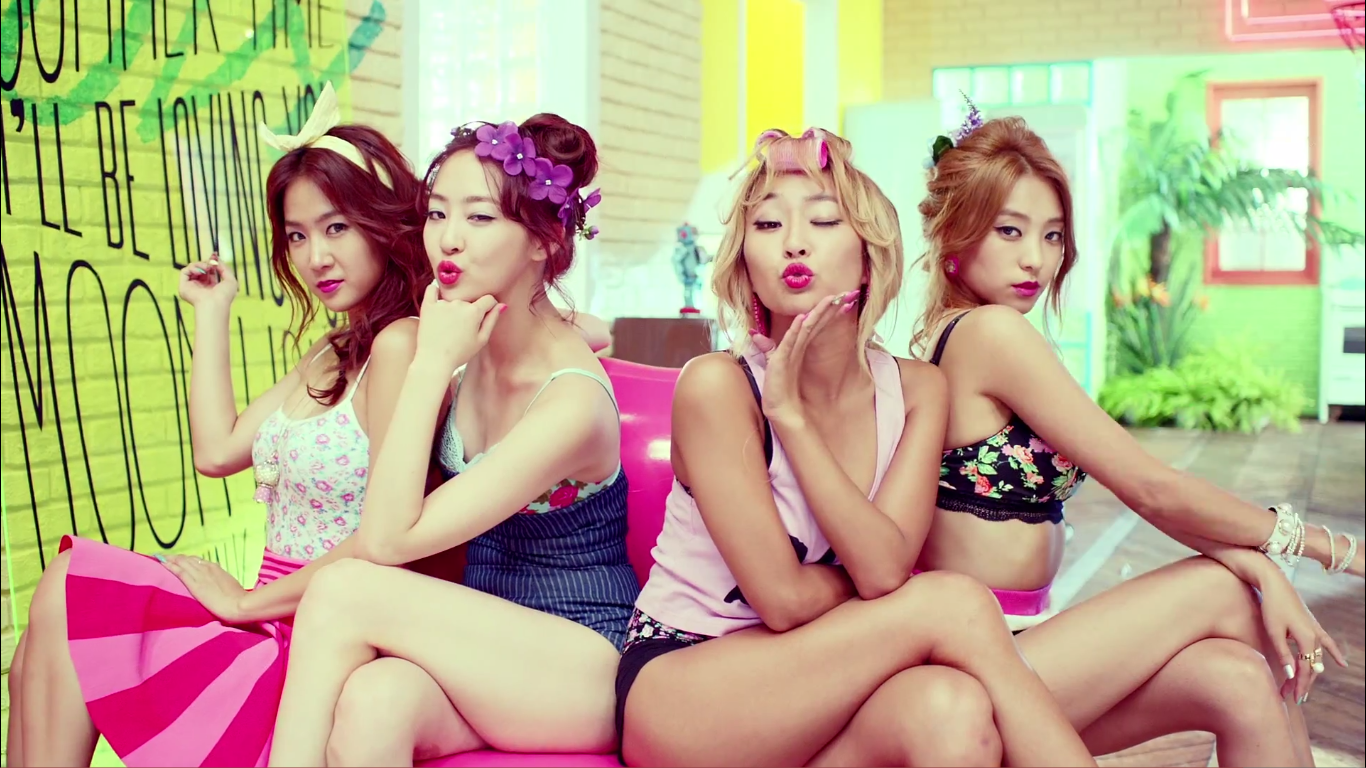 In light of Sistar‘s recent comeback, I wanted to dedicate this Artist Spotlight to the sexy quartet. Sistar came on to the scene back in 2010, with their debut track Push Push, a Brave Brothers creation. In terms of a debut song, in 2010, I suppose it was pretty decent. As I watch the music video and listen to the song today I realize how generic and bland it is.

For me, Push Push fell flat. The autotune is too much and the beat doesn’t really add to the song. The video is pretty standard in that it is a lot of Sistar dancing in different sets with different outfits on. The song has a good amount of English lyrics, which makes it easy to sing along to and hard to get out of your head.

However, I don’t want to take anything away from Sistar’s debut. It’s hard to be able to see what a group will become from their debut song. Luckily in Sistar’s case, things seemed to keep going up and up.

Brave Brothers produced Sistar’s debut mini album, and don’t get me wrong, I love a lot of Brave Brothers’ songs and productions, but sometimes the songs all just blend together. Shady Girl and How Dare You are both different from Push Push and each other, but to me they do not sound all that different from each other; they’re too cohesive (in my opinion).

As Sistar released more and more singles, they began to show who they really were as artists and as singers. As 2012 came around, Sistar was back at it again with the help of Brave Brothers. Alone was a smash hit and this is one of the styles that I prefer from Brave Brothers. Alone is raw, sexy, and showcased the ladies’ enticing vocals.

This was a huge step up from their debut and really showed K-Pop listeners what Sistar was about. The choreography for Alone is a perfect example of how a simple leg dance can become viral overnight and help define an group’s song.

Since debut, each member of Sistar has completed solo projects. They have all done numerous activities, including Hyorin’s solo debut, Soyou’s duets and collaboration projects, Bora and Dasom’s acting, and, of course,  various appearances on variety shows by all of the members.

Each member of Sistar brings a different element to the group. Hyorin is the most recognizable and well-known member of the group. Her amazing vocals can been heard on her solo album, singing with Stevie Wonder, and singing the Korean version of Let It Go in the film Frozen.

Not only is Hyorin a well-known vocalist and member of Sistar, but she is also a member of the sub unit Sistar19 with fellow member Bora. The duo had a spectacular comeback with the Brave Brothers song Gone Not Around Any Longer, which became an immediate commercial success. The song created, yet again, an infamous dance this time with a table.

Bora is more recognized for her variety show appearances and her athleticism at the Idol athletic competitions. The petite speedster can hold her own on the stage as well as in the field with the best athletes of the idol world. Bora has recently dipped into the acting pool as well. She was a supporting character in the drama Doctor Stranger that ran from May through the beginning of July. Hopefully we’ll see her in more acting roles in the future.

Soyou had an extremely successful collaboration with Mad Clown for their song Stupid in Love. The song became a success, and even earned the duo a win on Show! Music Core. Stupid in Love allowed Sistar fans, and music listeners in general, an opportunity to truly hear Soyou’s beautiful vocals.

Dasom has appeared in a number of music videos and most notably acted as the lead in the drama Melody of Love. Out of the four Sistar members, Dasom and Bora are the only two that I have seen numerous times on variety shows. I remember watching one show that Bora and Dasom were on, and Dasom stole the show with her wit, humor, and fun and care-free personality.

Since their debut, the ladies of Sistar have continuously improved their craft and stepped out into acting and variety shows. They may not be a huge force in the latter two, but nobdy can deny that Sistar has a certain spark about them that makes people attracted to their songs.

Recently, Sistar made their comeback with Touch My Body, a fun song not produced by Brave Brothers. Sistar, as I’ve mentioned, is known for sexy and sensual dances. Touch My Body‘s choreography includes those aspects, but also adds a bit of humor and oddness with the stiff leg wiggle.

Without listening to the lyrics, the beat, instruments, and overall production of the song is a perfect mid-summer jam that makes me want to dance all night with my friends under the hot summer sky. Oh Sistar, you’ve hooked me again with your catchy tunes.

From Push Push to Touch My Body, Sistar has definitely evolved in vocal abilities and range. They are clearly comfortable with themselves to sing about deep and mature subjects such as loving and drifting apart as well as the obvious lust and attraction between two lovers.

Do you enjoy Sistar’s earlier songs or their more recent songs? We’d love to hear you thoughts and don’t forget to follow us on Facebook, Twitter, Instagram, Tumblr, and Bloglovin’ so you can keep up with all our posts.