After an auspicious debut last year, ITZY are already ready to take on 2020 as they continue their premiere showcase tour, this time in North America. The latest girl group from JYP Entertainment had previously hit up four other major U.S. cities (Los Angeles, Minneapolis, Houston, Washington D.C.) before slowing their roll at their last stop in New York City this past weekend on January 26 at the Kings Theatre. There, the historic movie palace’s marquee aglow with “ITZY? ITZY! IN USA TONIGHT” greeted arriving fans with the affirmation that they had come to the right place, and that just underneath its cache of light bulbs and past the main entrance awaited something different. The finale was nigh.

Once inside, ITZY broke the ice for the evening with their most recent and aptly titled single, “Icy,” back to back with the less apt but still equally electrifying, “It’z Summer.” The girls, who were all decked out in coordinated white and silver sequined stage outfits, shined in more ways than one as they cleanly executed some of the choreographies’ more brisk moments while being also mindful of always maintaining a stable live performance through smiles. We should learn to expect as much from a group whose very brand rests on glitter and teen spirit.

With a collective “All In Us!” from the members, it came time for the self-introductions. All the members did their very best to communicate with the audience in English, but Canadian member Lia was particularly at ease that evening. She expressed her gratitude towards MIDZYs, their fans, who patiently waited for them and promised to return as soon as possible. That having been said, the girls proceeded to the meat of the showcase, and that was the variety segments.

ALSO ON KULTSCENE: FANS SAY ‘WE ROSE YOU’ TO THE ROSE IN NEW YORK CITY SHOW

The first of these was a Q&A corner, where ITZY answered pre-selected questions submitted by some of the MIDZYs in attendance. Nothing to write an exposé about here, but it was still just enough to glean a little insight into their private lives. The youngest, Yuna, shared how she would like their team mascot to be a unicorn, even using the emoji when saving the other members’ names into her phone’s contact list. Chaeryeong went on to explain how they used to joke that they were the Unicorn Team during their pre-debut days; the members were all free-spirited as one. Still, for the main dancer, she preferred something more hybrid: a delicate balance between cat and dog.

Since Lunar New Year was the day prior, the quintet also took pause to wish everyone a happy holiday during this time. One of the questions prodded the girls for their fondest memory regarding the New Year, to which Lia responded with how though “she don’t have anything special,” her family usually gathers for a lunch and visits her paternal family in the morning, followed by her maternal family later in the day. Unfortunately, as festive as this time may be, it also serves as a reminder for them of how they are not home to spend it with their loved ones. In an adorable pout, member Ryujin bemoaned how she wanted to see her father. Right on cue, the studio-like audience could not help but sympathize in unison.Awww!

On that note, the MC decided to steer away from “Question Time” to segue into the highlight of every fanmeet — Game Time. This one, dubbed “Challenge Mix Song,” involved having the members guess both the title and artist of three overlapping K-pop songs. From round one, this proved quite difficult for them even after generous hints, replays, and audience assistance. And with a punishment and prize on the line, there was no room for forgiveness of one another’s blunders either, which was the case when leader Yeji mistook the title of their own song “It’z Summer” for “It’z My Summer” (“It’s your summer?” quizzed the others).

Three rounds of this and many lifelines later, and ITZY had already reached the end game. This time, however, there was a caveat. Instead of K-pop, the mix would only feature American pop music. We suppose anything to shoehorn in Jay-Z’s “Empire State of Mind,” right? A momentarily sore Yuna, who scrambled the title of the unofficial state anthem but had the right idea, facetiously remarked how she was always trying with nothing to show for (a mood!). It didn’t exactly help either that she, along with Yeji, ultimately ended up scoring the least, having to fulfill the punishment that had the pair blithely recording a wakeup call for all the busy New Yorkers. Meanwhile, Ryujin took home the win, as well as a miniature version of the Statue of Liberty.

Before delving into the next entertainment portion of the night, ITZY resumed taking the stage for a rendition of their senior labelmates’ songs, “TT” (TWICE) and “Hard Carry” (GOT7). With only five songs to their name, these sorts of covers are inescapable. We were able to look past the obvious filler for these “monster rookies” though, who lived up to their sobriquet with their cookie cutter moves and pitch-perfect vocals. Their slick handling of such dichotomy — the beloved aegyo-centered “TT” versus the more hard-hitting beats of “Hard Carry” — makes the up and coming group easily duality manifest.

But back to the games. The final mission of the tour, “Pass the Ball,” tested the extent of ITZY’s teamwork by asking the members to cooperate in delivering a ball to a basket using only acrylic tubes that they had to link together in just two minutes. Through a comedic series of attempts, it appears that  teamwork really meant colluding with one another to find the best loopholes, including bringing the basket closer to them and transporting the tube with the ball in it to the basket instead of feeding it through a canal. They might have not succeeded, but at the very least they were awarded the high-budget consolation prize of magnets. As for the punishment, it was Lia who beared the brunt of it, performing the viral “Gwiyomi Song” while putting on a random dance. Chaeryeong and Yeji carried out their own fan service on her recommendation too, although theirs never felt like a penalty when sending hearts to New York MIDZYs came naturally to them.

Just only a few songs left, the show had neared its imminent end. “Cherry” sealed their girl crush concept with its trap stylings and darker colors, whereas the clarion calls of the punk-inspired “Want It?” and unabashedly feminist energy from “Dalla Dalla” brought it all back to their grrrl power agendas. Moxie like this haven’t been seen since the Spice Girls, and with a promising start to their career already, they are certainly a pop force to be reckoned with. The last leg of the tour, ITZY’s showcase in New York City left a bittersweet taste in probably everyone’s palates that Sunday, one that was especially felt by the teary-eyed Chaeryeong as she struggled through her ending ments. They might have came as they had gone, but if there is one thing MIDZYs can still hold onto from the night it is the group’s word to come back, guaranteed. Until then, Yuna urges us to all smile in the meantime as she keeps doing the same. 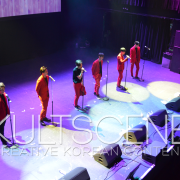