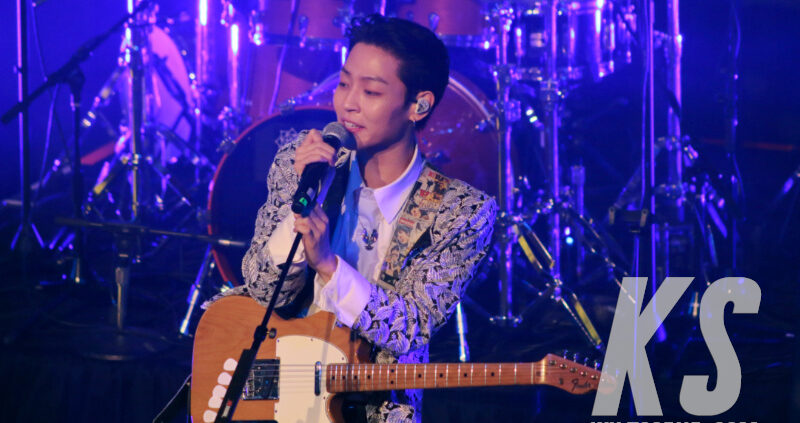 On September 1st, New York City was all hustle and bustle with summer parades and street festivals clogging the avenues in midtown, but turn down 43rd street and there you found a small crowd of people quietly lined up outside of The Town Hall for The Rose’s “We Rose You” tour. It has been over a year since The Rose was in New York and fans were excited to see how much the band has grown. After the doors opened, the audience quickly filled up the theater and waited for what would be a very memorable performance.

The Rose entered onto the stage, grabbed their instruments, and began to play the opening notes to “I.L.Y.” The fans erupted into cheers and screams as the band quietly played the cords until Woosung suddenly stopped. While they adjusted the volumes on their instruments and inner-ear pieces, Dojoon joked around with the audience, saying that the crowd is so lively that they could barely hear and that this would be a “special” performance. When they were ready to start again, Woosung playfully said, “Just pretend we just came on,” and began playing once again. As soon as the bridge started, the audience sang as loud as they could, almost drowning out Woosung’s powerful voice. The band immediately went onto “Insomnia,” with the audience continuing to sing along. After the song, the band had to stop again to adjust the volumes of the equipment. After many apologies and an impromptu sound-check, some of the band members ditched their inner-ear pieces and went old school, using the ledge speakers to play “I Don’t Know You.”

After a short introduction, the band started back up with the upbeat songs; during one of which Dojoon surprised everyone by grabbing the mic and delivering a rap verse that had the crowd shouting with excitement and throwing their hands in the air. And when the boys ventured out from behind their mics, you could really see them come alive, just jamming out on their guitars. During “California,” the audience yelled “young and wild” and sang along with the band’s new English-language song. Another popular song was the sentimental song “She’s in the Rain.” The band then briefly spoke to the audience during another quick volume adjustment about how they felt more connected to the audience because they can hear them so well.

The band went on to play a few covers including The Script’s “Breakeven” and Harry Styles’ “Sign of the Times.” After a few more songs, the members left the stage, leaving only Dojoon behind to sing a cover of James Bay’s “Hold Back the River.” Hajoon and Jaehyeong then came out next; trading in their usual instruments for two acoustic guitars and sang “Soldier” by Before You Exit. Woosung was last to take the stage and sang “Lonely” and “Face,” two songs off of his recent solo album.

The band then returned to the stage and called out the winners of Polaroid photos of the members before going right into a few more upbeat songs. Despite having to stop between almost every song, The Rose kept up their energy and their fans replied by giving it their all by cheering and dancing around; showing the band that they were still enjoying themselves. After “OMG,” the band kept the energy up with “Baby,” after which they announced the show was coming to an end.

After saying a few words and thanking the fans, The Rose immediately went into their mainstream debut song “Sorry.” The fans were louder than ever as they sang along to it. The band left the stage after “Take Me Down” but did not stay gone for long; the boys returned for the last song of the night, their new single “Red.” Showing no signs of slowing down, the band played happily as the fans sang and danced till the last note.

Though as soon as the band walked out onto stage that night they were plagued with audio trouble, through their sheer tenacity and with the encouraging screams of their fans The Rose was able to pull off an extremely memorable show. Like seasoned professionals, the band made sure to interact with the audience, either making witty banter or flashing hearts and smiles. And though there were pauses in the show, all went without anybody losing composure. Hopefully as The Rose continues on with their tour, they will be able to show their talents and put on even more memorable performances.