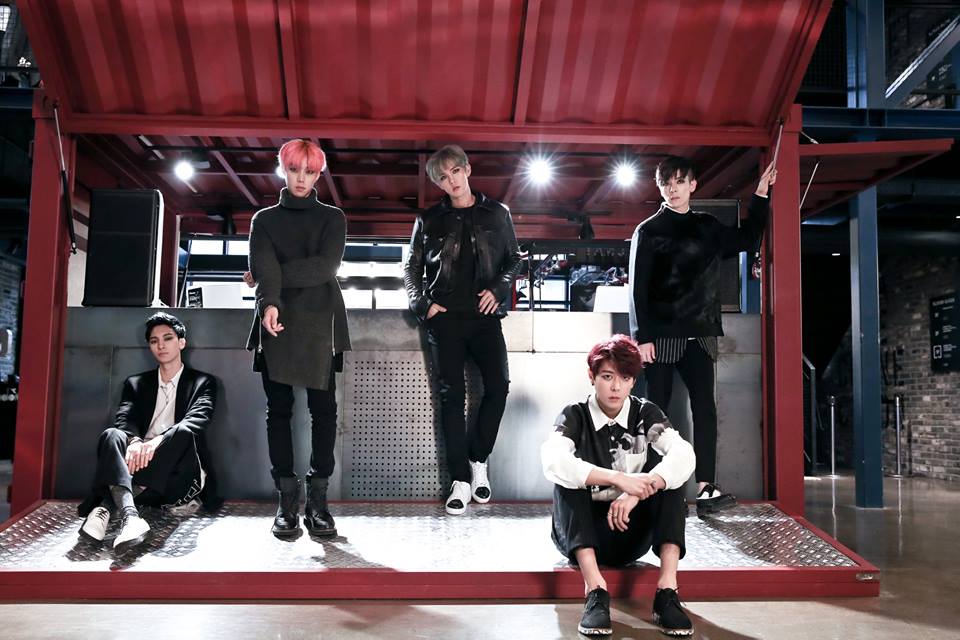 Following a slew of K-Pop groups that embarked on European tours in 2015 comes Loen Entertainment’s five member boy band, History. Comprised of Kyungil, Dokyun, Sihyung, Jaeho and Yi Jeong, History debuted in April 2013 with the critically acclaimed “Dreamer.” A supremely talented quintet, History’s unconventional sound and bold concepts make them stand out in the highly competitive boyband market and will undoubtedly make their tour an unforgettable experience for all STORIAs, History’s fans.

Arpeggios Entertainment organized three shows for Helsinki, Finland on Feb. 20, London, UK on Feb. 21, and Paris, France on Feb. 24. Meanwhile, a final show has been set for Bucharest, Romania on Feb. 27, organized by Kompas Events.

History has consistently switched up their sound with every comeback, giving them an element of surprise with which to delight their fans. The boys have also introduced many genres into their music to showcase their incredible versatility. For example, the concept for “Dreamer” could have come straight from a Broadway musical, while follow-up song “Tell Me Love” is a 90s style techno dance song. Each song is diverse: “What Am I To You” incorporates Latin influences, “Psycho” was a throwback to 80s electronica, and the band’s latest single, “Might Just Die,” mixes both classical and hip hop influences. All of this, plus History’s exemplary vocals and rapping, add up to a truly unique style that we can’t wait to hear performed live.

History’s first music video, “Dreamer,” features carefree dance moves highly reminiscent of Fred Astaire, while they make a stark 360 degree turn in “Psycho” and “Might Just Die,” both of which involve sexually suggestive choreography. The latter has all the classic boyband staples of body rolling, ab flashing and raunchy choreography, but it is executed with such amazing finesse that when the members throw themselves on the floor towards the song’s conclusion the viewer is sure to be bowled over! Be sure to keep an eye on Kyungil during “Might Just Die”- his choreography had to be altered for broadcast performances in South Korea.

With “What I Am To You” and “Psycho,” History ventured into bold new territory. The music video for “What Am I To You” was shot in Germany and features scenes of Kyungil drinking heavily, downing pills and smoking marijuana, while Yi Jeong is beaten up by thugs. “Psycho” gave all the members a chance to show their acting abilities, with each representing a facet of Yi Jeong’s multiple personality disorder. He obsessively stalks a woman and an evil facet of his character, represented by Kyung Il, tries to harm the girl, only for Yi Jeong to fight back. History’s youngest member replicates the mannerisms of Norman Bates from Hitchcock’s eponymous thriller “Psycho” and by the conclusion intends to murder the woman who torments him. While the music videos may play before the show, here’s to hoping that their concepts will be carried over into History’s performances!

The idea of members sending hearts into the audience will surely make stomachs fill with butterflies, but any STORIAs in the audience are sure to keep an eye out for interaction between Kyungil and Yi Jeong. The two members have the most adorable father-son/brotherly relationship that’s filled with hugs, silly interactions, and far more. Meanwhile, don’t forget about the other three. Just because they’re in the middle of the group age-wise doesn’t mean that Sihyung, Jaeho, and Dokyun will be annoyed. No, there’s going to be a lot of fun interactions from History at these shows so be prepared!

Youngest member Yi Jeong proves his musical dexterity on the group’s latest mini album, “Beyond The History.” He showed off his talent by composing the title track “Might Just Die,” a feat relatively rare in K-Pop. Yi Jeong also wrote the electronic hip hop song “Ghost,” as well as his own solo rap track “1Century,” which showed a much edgier side to his usual persona as a main vocalist. The youngest member’s solo stage will surely wow the crowd.

History’s forthcoming European dates promise to be outstanding and will surely garner them even more acclaim, while increasing their fanbase significantly.

Tickets for the London show at the O2 Academy Islington are £95 for VIP tickets, including a meet and greet and early entry, or £35 for the normal tickets. They’re on sale now through Weeze Events.

Tickets for the Paris show at the Divan Du Monde and the Helsinki show at the Gloria are €99 for VIP or €39 for the standard. Tickets are also available through Weeze Events (Paris tickets , Helsinki tickets).

The final show in Bucharest will be held at the Palatul National al Copiilor, and tickets are on sale for 300-150 RON. They can be purchased through Bilete.
What do you love about History? Are you going to their tour? Share your thoughts in the comment section below and be sure to subscribe to the site and follow us on Facebook, Twitter, Instagram, and Tumblr to keep up with all of our posts.

MADTOWN debuted in October of 2014 with YOLO and it was an unexpected direction taken by J. Tune Camp, which took a lot of people by surprise. However, it was a risk worth taking because the music video and song itself ended up being well-received by the audiences. Now these guys are back and they’re telling you to deuru wa (which means ‘come in’ in Korean) with another dance track New World off their 2nd mini album Welcome To Madtown.