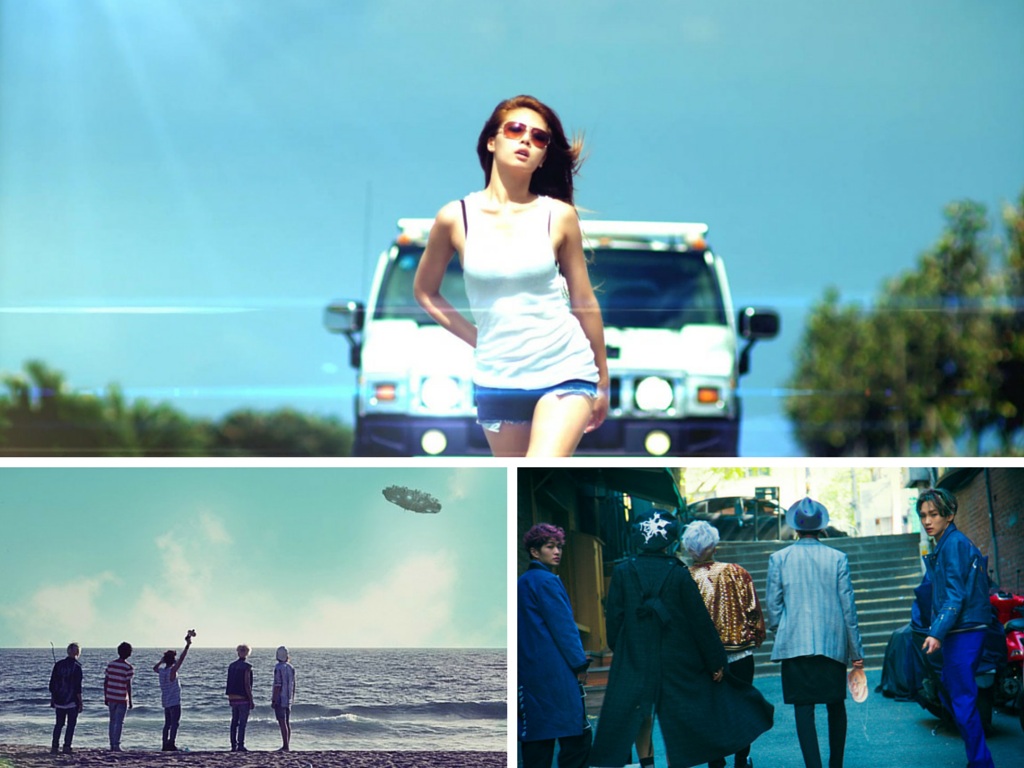 If you are enrolled in a higher education program, then summer break has just started, and if not,
then you are preparing for it. Either way, as we are nearing the midpoint of 2015 we could all use
a couple of tunes to unwind to from this busy first half of the year. Before the inevitable upbeat summer-themed music videos start to roll in from our favorite acts, it
is worthwhile to check out some of the already established hits. So in order to start off the break with the best attitude, here’s five fun K-pop songs to get you in the summertime spirit.

Though it has been a long two years since SHINee last released a full-length Korean album, fans discover that it was well worth the wait as the group’s fourth studio album “Odd” recently dropped and has been dominating the music charts worldwide. Written by leader Kim Jonghyun himself, the title song, “View,” heralds in this year’s early kickoff of summer releases. It features an addictive chorus and funky techno beats that are sure to make listeners dance and sing along, whether at a summer pool party, club, or simply alone within the confines of our bedrooms. The blend of a house sound in the chorus is something that can easily be popular among non K-pop fans as well.

The video itself is very refreshing, as the boys are finally let out of SM Entertainment’s formulaic flashy box sets and into the wild with a group of beautiful female friends (or fans?) who take them away from the public’s watchful eye. Together, the gang ride motorbikes, swim in other people’s pools and drink it up at vacant bars – activities that we would never catch our idols doing. They also trade in their usual eccentric prints and suits for a more casual, quotidian look. The whole video just screams summer getaway, and audiences are left feeling a sense of liberation as we watch the members shed away their responsibilities. “View” is definitely one of the must-watch, must-listen to videos and songs of the season.

Off of their fifth mini-album of the same name, “Solo Day” is one of B1A4’s best and most fun tracks. After they released songs such as “Lonely” in 2014 and “Tried to Walk” in 2012, which showed a more mature side to the quintet, it was nice to see the boys return with a track that showcased their original silly dispositions that they debuted with back in 2011.

Produced by leader Jung Jinyoung, this title song has a light and sing-song feel to it. The repetitive chorus of “solo, solo day,” accompanied by the playful whistles, will undeniably get stuck in listeners’ heads even after the first listen. The video matches the song perfectly as it is just as ridiculous and whimsical. The members take on the role of five quirky individuals – the couch potato (Jinyoung), the pizza delivery guy (Sandeul), the obsessive compulsive guy (CNU), the space geek (Baro), and the flower vagabond (Gongchan) – who, through their road trip antics, end up signaling and encountering a UFO on the beach (yes, you read that right). It does not make much sense, but it does not have to. That’s the charm of B1A4. Just as how the boys are singing along while driving on the wide open road or how they bob their heads to the beat of the whistles, this catchy tune will have listeners doing the same.

The group takes a somber topic, like that of a break-up, and transforms it into an upbeat and empowering track about the freedom that supplements with it. Such a positive message and entertaining video is sure to be a perfect addition to any summer playlist.

Because what “Fun K-Pop Music Videos & Songs to Start Your Summer” list isn’t complete without “Bubble Pop!,” right? Produced by the musical masterminds behind many of the songs from HyunA’s group 4Minute, Shinsadong Tiger and Choi Kyu-sung could not have anticipated the success that the hit would garner.

Coming in fourth on Gaon Weekly Digital Charts at the time, it was practically the summer anthem of 2011. The track presents an up-tempo and sassy quality to it, which suits HyunA’s sexy and bad-girl image. It’s the type of song that will have listeners bouncing around on their beds or shaking their booties at the notorious “Bubble bubble bubble pop, Bubble bubble pop pop” lyrics. Despite HyunA’s position as a rapper, the song is short of any raps, but rather punctuated with aspirated ooh’s and aah’s that further add to the seduction.

Overall, the track is very (appropriately) bubbly. As for the music video, HyunA never looked better. Her tan and slim figure makes any of the outfits – from the flirty self tie shirts to the evocative mesh tops – she wears look good and lets us know that she is beach-ready. With its various poolside and sandy beach scenes, the video emanates a very apparent summer vibe. It reminds us that ‘tis the season for summer flings with the cameo of MBLAQ’s ex-member Lee Joon as the male love interest. Set in a comic book-styled vignette, the video follows the two on a shopping date.

Unfortunately, the video also reminds us that flings are ephemeral in nature, as depicted in the scene where HyunA coyly shoves Joon into the pool after catching him ogle at other girls. Over the span of four years, this fun-in-the-sun video racked up nearly 93 million views on Youtube already, proving that it is a favorite among many.

Inspirits (Infinite fans) are in for a treat at this summer throwback. From their debut mini album “First Invasion,” “She’s Back” is one of Infinite’s most feel good songs. Infinite is one of those groups who has a distinctive sound and sticks with it. Unsurprisingly, this electro-pop title bears the same synth-heavy and often retro sound that will lay the groundwork for later songs.

Coupled with the passionate long notes from main vocalist Nam Woo Hyun and the collective voices of the seven members during the chorus, it works well here to produce a fun and loving track. And while listening to the song on its own may not conjure images of pools and getaway resorts like the other tracks on this list might, after watching the accompanying music video, it will be hard not to separate the summertime themes from this single.

Within the first couple of seconds, we are immediately thrusted onto a beach where the boys clad in trunks, tank tops and flip flops are running with their dog. Another couple seconds in and the boys are enjoying a picnic. The fun doesn’t stop there as the next few scenes show them playing water games in a pool. This is all spliced together with clips of the members singing in unison on a boat in a beautiful wash of light as the sun sets down on them. If this music video is not considered the epitome of summer, then I do not know what is. The boys are all smiles as they appreciate their mini vacation, and we can’t help but too just watching them being all jubilant. A fine tune to jam to during any summer, Infinite’s “She’s Back” will have listeners crying out in joy that she’s back without knowing exactly who she is.

Also on Kultscene: 5 Reasons You Should Be Excited for Shinhwa’s Appearance at KCON LA [UPDATED]

Afterschool RED “In the Night Sky”

Probably the most underrated title on this list, “In the Night Sky” is the result of After School’s special project unit group composed of members Kahi, Jungah, UEE, and Nana. It features a
looped synth sound and a pleasant to listen to melody that is characteristic in any dance-pop song that Brave Brothers has and will produce. Perhaps this is why the track is so reminiscent of Sistar’s “Shady Girl,” another one of the many hits that the talented producer has in his repertoire. In fact, during the second verse where Kahi raps her lines, I can easily envision Sistar’s Bora replacing her part. Nevertheless, “In the Night Sky” offers a slightly more memorable chorus with its repetitive eh, eh’s that are very easy to sing along to, especially for those who may not be familiar with the language.

Again, the song would not be complete without the concomitant music video. If the fresh, girly vocals of the subunit did not convince listeners of its summer playlist potential, then maybe the
video might. The concept of the video can best be described in two simple words – bohemian chic. The girls, minus UEE, who they later meet up with, look absolutely fierce riding through the open desert in their Harley’s and Jeeps dressed in headpieces, feathers, braids, fringes and animal fur. Once the four are reunited and night has fallen, we see the four dance around a bonfire with a slew of friends, seeming as if they are without a care in the world.

There must be something about summer that makes people feel empowered and independent, but this song preaches the popular “I’m stronger without you” message that usually prevails around this time of the year. Certainly, “Into the Night Sky” is the ideal soundtrack to listen to on a cool summer’s night with some close friends.

While “Just Say Goodbye” (“Enter the Dragon,” 2001) may not be what you expect when you think of fun and upbeat summer songs, the music video for this song is just too stunning not to include here. Shot in Saipan, the video reveals the island’s tropical forests and clear blue skies. jtL members Tony Ahn, Jang Woo Hyuk, and Lee Jae Won stand high on a mountain overlooking the sea, letting the wind blow through their shirts while singing emotionally to the ballad. Meanwhile, a young Song Ji Hyo (actress and cast member of Running Man) meanders through the lush flora alone. Everything about the song and video is just so romantic, yet bittersweet. The nostalgic old-school K-pop sound of this single would be great to wake up to on a bright summer morning. 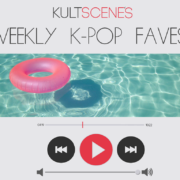 Weekly K-pop faves: June 12-19
May Music Releases From Korea That You Might Have Overlooked