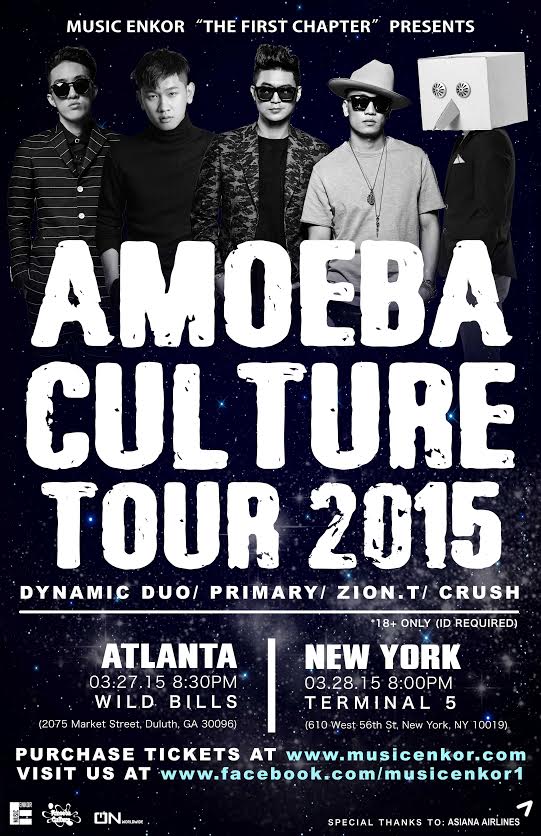 Dynamic Duo, Primary, Zion.T, and Crush are all coming to the United States for one weekend in March to perform in two cities for their American fans. The four artists are all label mates at Dynamic Duo’s record label, Amoeba Culture, and now they are embarking on a quick trip to the US to entertain their fans with what is bound to be two unforgettable shows. With Amoeba Culture’s upcoming shows in Atlanta and New York City, we want to highlight a few songs from each of the artists who will be performing on the East Coast.

Aeao is Dynamic Duo’s most recent digital single. The song not only shows off Choiza’s and Gaeko’s rapping skills as well as Gaeko’s singing, but it shows that Dynamic Duo is a contender in the hip hop community throughout the world. DJ Premier worked with the duo on Aeao and another song, Animal,  by adding a bit of Western DJ flair. The song is a great music track filled with trumpets and percussion.


Baaam is off of Dynamic Duo’s last full length album Luckynumbers. The different elements of classical music, funk, and hip hop make Baaam an appealing song to listen to. Gaeko and Choiza deliver, as usual, and Muzie of UV features on the track and in the music video. The song is upbeat, fun, and a great tune to listen to on repeat. Not only is it a good song, but Dynamic Dup released a second dance version of the music video that features the all female backup dancers.


Attendance Check brings us back to old school Dynamic Duo. The half shouting with the rapping is reminiscent of the Beastie Boys’ style of rapping. This song uses similar hip hop, DJ-ing, and even some R&B styles/influences of Western 90s hip hop groups. It’s an uptempo song full of impressive rapping from Gaeko and Choiza, as well as  soulful vocals from Naul of Brown Eyed Soul.

Primary’s only full length album, Primary and the Messengers, boasts 19 songs and numerous collaborations. Mine Tonight is a song that has a strong bass that immediately draws you in. Jinbo’s vocals perfectly lay on top of the beat and give off a 90s vibe. The chorus to Mine Tonight is infectious with its English lyrics and funk-inspired music. Dok2’s rap toward the end of the song fits in well with the style of the music and the song.

? (Q Mark) actually features Gaeko, Choiza and pre-debut Zion.T. The beat is fresh and different, but still familiar and still Primary. It’s a slightly slower song in terms of tempo, but shows off the rap skills of Geako and Choiza. Zion.T sings on the track, which was a perfect platform to introduce his vocal skills before he debuted officially as a solo artist. The four together create a seamless song from start to finish, complete with Primary’s beats and production skills.


Line 3, Maebong Station shows a different side to Primary and to the overall album. The song is much, much slower than the majority of the songs on the album and it definitely stands out because of it. The slower pace and slightly sombre feeling are a perfect basis for Paloalto and Beenzino. Their rapping and vocals still make you bop your head, but with a little heavier feeling than other songs. Even with that, it’s a great song with impressive rapping music.

Miss Kim is a completely different style of music from most of Zion.T’s songs and even in the mainstream Korean music scene. The constant hi-hat and accordion sounds add an old world and jazz feel to the song. The accordion sounds like an Eastern European folk song, and the hi-hat brings us to the jazz and lounge singers era. Zion.T’s vocals really shine in this song. He’s almost quiet and reserved at the beginning of Miss Kim, andbut then at the end he lets out some beautiful notes. It’s a different song on every level and a great one at that.


Oh Na Na (literal translation global warming) is also a different sound from other mainstream Korean music. Zion.T utilizes the reggae sound, vibe, and feeling beautifully. The song has a great groove to it and uses trumpets throughout, giving it a hearty feeling as well. Oh Na Na is off of Zion.T’s first album Red Light. The song makes you feel good whenever you listen to it, especially on a summer’s day.

I Fancy You is the first track on Crush’s debut album Crush on You. The title is pretty self explanatory and the music gives off a 90s/early 2000’s R&B vibe. Crush’s soulful vocals pair brilliantly with the music and the style of the song. His talent not only lies in his voice, but in his artistry as well; Crush writes, produces, and composes his own music. I Fancy You is a slow tempo song that shows off the singer’s voice and is only one of two songs on the whole album that does not feature another artist.

Hey Baby
In my personal opinion, Hey Baby is the best song on Crush’s album. He channels Michael Jackson not only in the music, but in his vocals as well. His beat boxing introduces the song and lets the listener know they’re in for something good. The synths and percussion bring you back to the 80s when Michael Jackson was King. The pairing of Crush and Zion.T’s vocals is almost too much to handle.

If you’re interested in purchasing tickets for the Amoeba Culture Tour 2015 visit www.musicenkor.com. Tickets will go on sale at 8:30pm EST on Wednesday, January 28, 2015. Tickets can be purchased for either Atlanta, Georgia for the concert on March 27, 2015 (Friday) OR for the New York City show on March 28, 2015 (Saturday).

1. Amoeba VIP Pass: $195
This pass will include a foam light stick, a snapback, and a Meet & Greet and a photo with the artists.

a. The merchandise will be given as the attendees enter the venue.

i. Atlanta: After the show in a separate area closed off to all but the VIP pass holders.

ii. New York City: Before the show stars, VIP holders will be let in earlier to meet the artists.

2. Priority Pass: $95
This pass includes a foam light stick and early entry to the venue. Both venues are primarily all standing which makes for early entry all the more valuable.

**You must be 18+ with proper ID to attend the concerts.

As if you weren’t excited enough, we have an update!