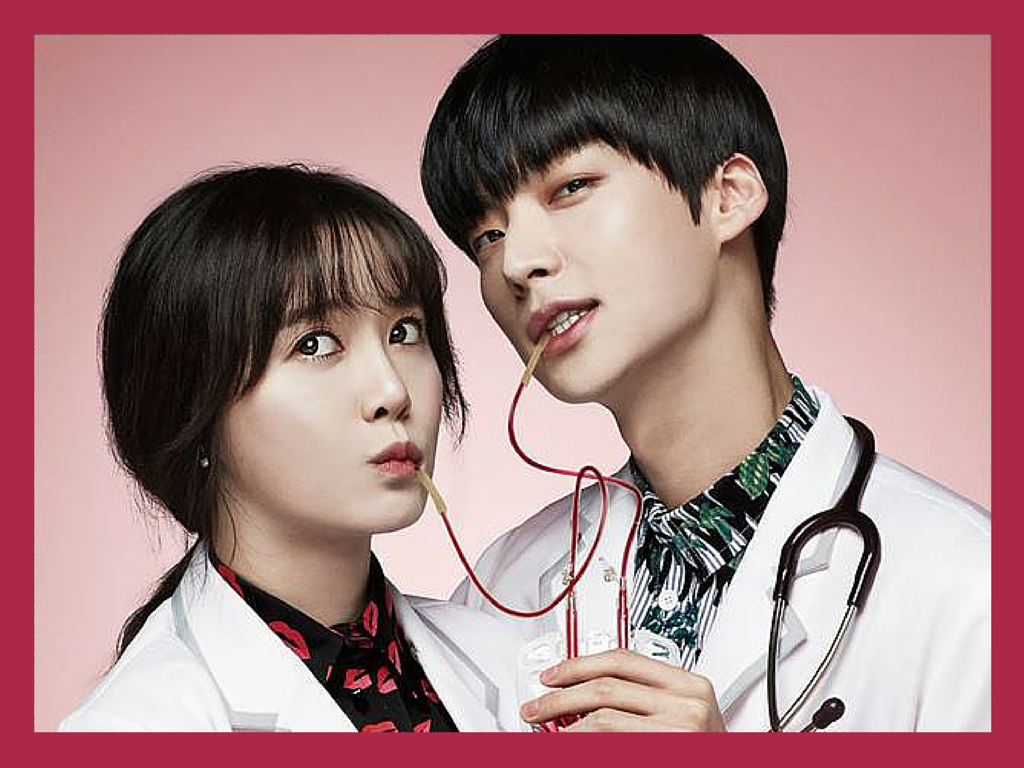 KBS 2TV’s newest drama Blood about a vampire doctor just premiered in Korea this week and received mixed reviews from local and foreign audiences. The criticism focused on the allegedly bad acting of the lead actors, Gu Hye Sun (Jan Di from Boys Over Flowers) and Anh Jae Hyun (Cheon Song Yi’s little brother in My Love From the Star), and the similarities to the Twilight saga.

And while there is some validity to these statements (like the resemblance to some details in Twilight), there are also many more as to why you should give Blood a chance. The drama is only at its second episode, so all it needs is the opportunity to let the plot develop a bit more, which is, at the minimum, intriguing.

[Spoiler Alert: Some details of the story will be revealed]

From the first two episodes, here’s what we know so far: Ji Sang (Anh Jae Hyun) is a vampire who works at a prestigious hospital as a surgeon, but is able to quench his thirst with the help of a pill. Yoo Ri Ta (Gu Hye Sun) is also a surgeon at the hospital (we still don’t know a lot about her). However, the story revolves around Ji Sang looking for the origin of his vampirism disease in order to develop a cure, and clues he has found have directed him to this oncological center.

The vampire-fantasy Korean drama is anything but a novelty (Vampire Prosecutor, You Are My Vampire), with many of these riding on Twilight’s immense popularity when they aired. However, while the Cullen’s hype has long died down, we’re left waiting for the next big vamp story. Because Twilight is not the first vampire story to be hugely popular; vampire stories (Dracula, Interview With a Vampire) have always had a certain appeal to them, and like any trend, they come and go. Blood just might ignite that interest this year.

Also on KultScene: 6 Sides To ‘Kill Me, Heal Me’

Ever since its inception, vampire stories have a certain sexuality to them (I mean, have you read Dracula or Queen of the Damned?). So the inclusion of Anh Jae Hyun as the lead –with his piercing, cold eyes, long neck, and pale, pale skin — is a match made in casting heaven. The boy, like many other gorgeous actors, was a model prior to go into acting, so of course he models his way through Blood; the way he dramatically throws his doctor’s robe on or how he always lets the camera film him from his perfect profile. The boy knows what he’s doing…

… Although some viewers don’t think he does, at least when it comes to Ahn Jae Hyun’s acting. Nor Gu Hye Sun, who has had a long, successful career as an actress. Rather than their acting being bad, it’s overly dramatic, almost theatrical. But, after all, the story is about a vampire who’s also a doctor; you can’t expect their acting to be super serious and methodical.

Viewers also criticized the use of poor CGI for explosions and other details, and who can blame them? Hollywood has accustomed us to movies like Avatar and all those super hero blockbusters –of course an unrealistic explosion will look fake to our eyes. However, it’s important for viewers to understand they’re watching a drama, not a multi million dollar film. C’mon, be realistic…

And as mentioned before, Blood’s plot is interesting and unique. We all know how vampires are made: one vampire bites another one and damns them to immortality, unless they’re killed in some brutal way (wooden stake to the heart, setting them on fire, depends the movie/book you’re basing it on). However, in Blood, humans can contract a virus that turns them into vampires. Sure, they’re still sensitive to natural light, but in order to kill them, you need a special substance that’s injected through the neck. And since it’s a virus, Ji Sang, through his parents’ guidance, tries to find a cure.

However, it can’t all be just a quest for a cure, and the vampire’s journey is underlined by the inevitable love line. Of course there are bad guys –bad vampire guys — who brought Ji Sang to the hospital to stop him and… who knows! We’ll have to keep watching. From the first two episodes, it’s not clear exactly what the bad guys want, but we do know they have some serious beef with Ji Sang’s parents and thus him, and want him in the hospital.

If I had to pick a K-drama Blood might be similar to, it would be City Hunter. Although Lee Min Ho’s drama was more action packed, Blood also has it’s fight scenes, and the plot looks like it has the anti-hero fighting for his own cause against some jerks who want to bring him down. It’s still very soon to fully know what’s happening with Blood, and that’s the great thing about it. Most dramas you can pinpoint who the second male lead is and where the love and storylines are going — but that’s not the case with this drama. With every episode, viewers are finding out little by little what’s going on, and that’s what makes a drama worth tuning in.

Blood is currently being streamed on DramaFever, with new episodes every Monday and Tuesday. Check out the trailer here: