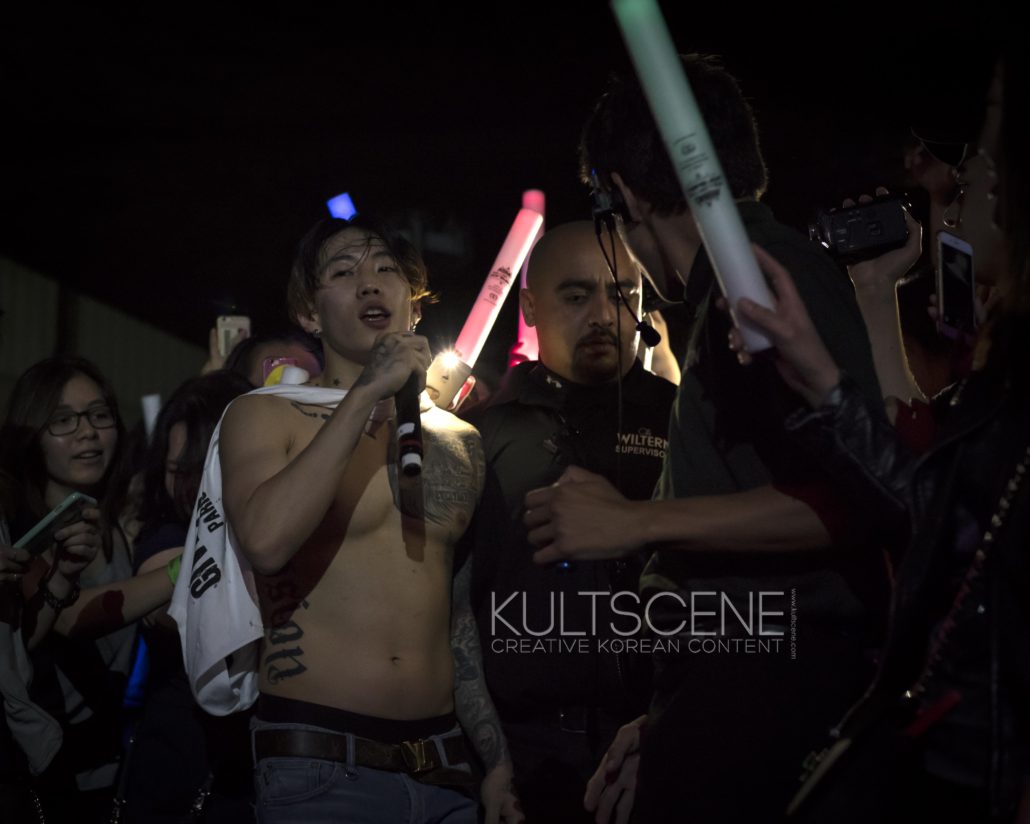 AOMG artists Jay Park,Simon D, Gray, Loco, and DJ Pumkin turned the Koreatown staple The Wiltern in Los Angeles way up on Apr. 14 with their AOMG Follow the Movement 2016 American Tour. Their show at the City of Angels was part of the home stretch of their eight-city tour, and despite them being a bit sick and on their fourth show back-to-back, the guys put out an outstanding performance to a full house.

Each rapper performed a set of about nine songs each, which given their repertoires might seem as very view. But with energetic performances of “Dang, Dang, Dang,” “You Know,” and “I Like 2 Party,” the rappers curated a perfect show that gave the audience a crash course on AOMG excellency.

The L.A. AOMG show was one of those “you had to be there” experiences that don’t come around often. It might have been a fast two-hour show, but it will go down as one of the most fun Korean rap shows of the last few years. And while we can’t make a complete recap of the night (again, you had to be there!), we can share a few highlights of the night and what we learned about Korea’s hottest hip hop label and rappers.

1. Jay Park’s Not Afraid of Getting Groped

There’s no denying that Jay Park is hot. That, of course, is not an invitation for fans or anyone to touch and grope him though. It’s common practice that when K-pop idols go into the audience during their shows, they’re kind of freaked out by the number of fans reaching out to grab them (I specifically remember one nervous Sungyeol at Infinite’s Los Angeles show back in January). They’re generally visibly uncomfortable but push through it because they’re professionals and want to please the fans. 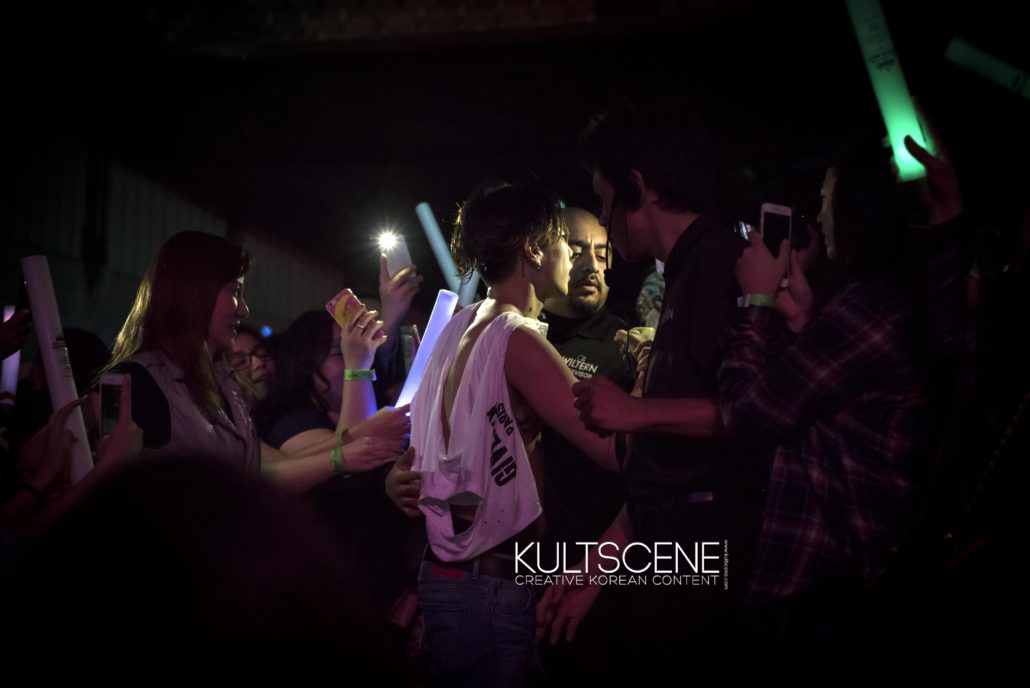 Mr. Jay Park however seemed like he didn’t have a major problem with that. Not only did he go into the audience during one of the last few songs of the L.A. show, but he did it at every stop of the U.S. tour. Fangirls went crazy, and yet, he continued to do it. For the Los Angeles show, Jay flocked to a group of male fans in the audience and jumped and sang around with them. He appeared genuinely appreciative of his male fans who he knows aren’t all there to see him strip, like one fan suggested right at the start of his set.

Also on KultScene: Why You Should Watch Korean Film ‘Time Renegades’

2. Simon D’s Popularity is No Joke

When it comes to shows with multiple artists, the pace is set to build up momentum for the main act at the end. And yet, that wasn’t the case with AOMG. With zero build up, Simon D opened the night to a crowd that went from zero to 100 instantly just at the sight of him; no hype men needed. Not to mention that the three opening songs were “Simon Says,” “Simon Dominic,” and “Won and Only,” which only got people dancing, singing, and waving their hands that more excitedly. 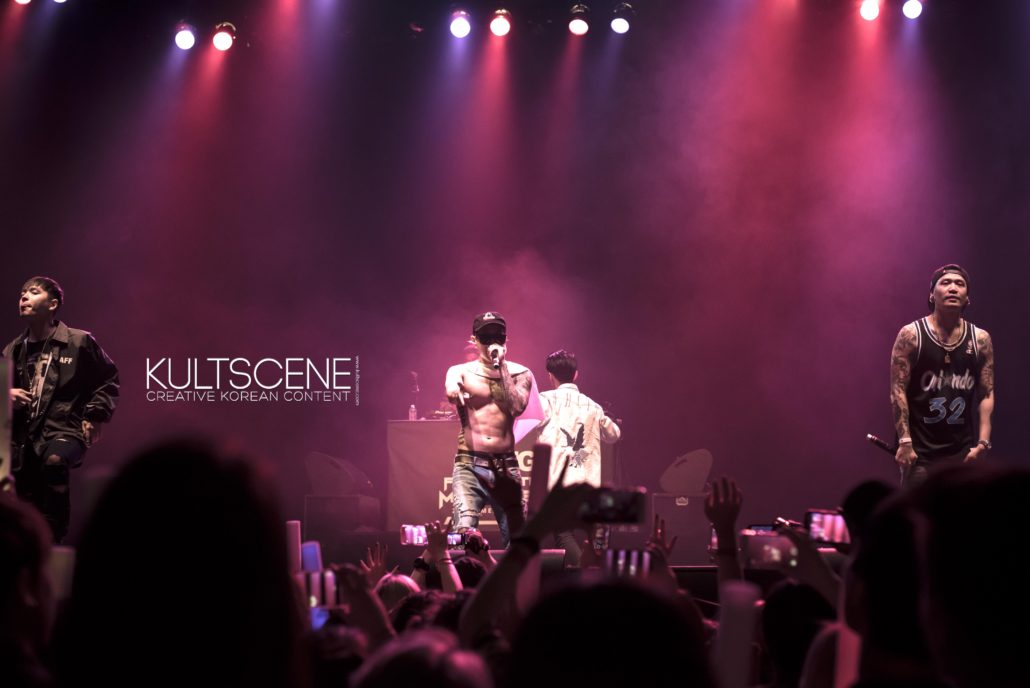 Even if he had the shortest set of the night (debatable, since Loco and Gray performed together), more than a couple of people were absolutely moved by Simon’s mere presence. After a long career where he had to overcome adversity, it was mind blowing how he’s still going and is stronger than ever; the fans’ reaction back this up.

Fans recognize his struggle and that’s why they’ve stuck with him. Jay, his abs, and his “Mommae” dance might have drawn the most screams and cheers from the audience, but Simon D just by his verses came at a close second.

3. Gray Needs to Go Back to Rapping ASAP

Despite him being a popular rapper, especially among female fans, he’s only released one mini album way back in 2013. That’s an eternity in Korean entertainment time! And we get it, he’s produced a lot of great songs for artists like Zion T., Dok2, Infinite H, and of course his AOMG label mates because he’s awesome at it. But if something was made clear on the night of the show is that Gray needs to get in front of a mic already. Three years with no new material, but the boy is not rusty at all and killed his set, performing his EP jams like “Dream Chaser” and “In My Head.” He also gave Loco a hand with his hit “Respect,” and performed their collaborative tracks “If I” and “Just Do it” together. So what is he waiting for? We’re all so ready for this. 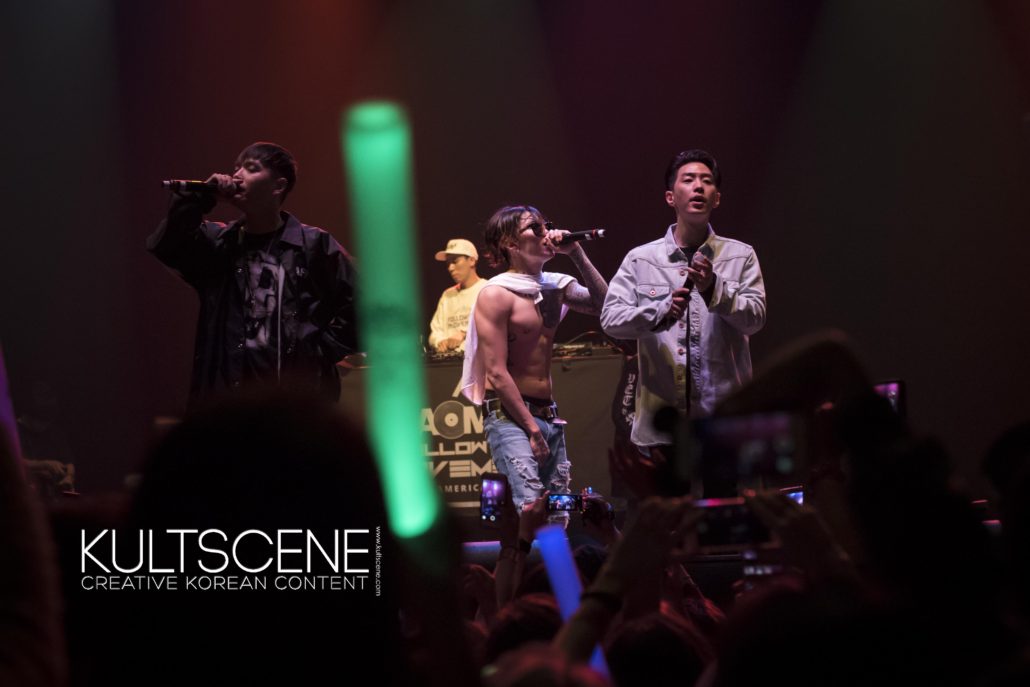 4. Loco is Awkwardly Adorable When he Comes Out of His Shell

On his music videos or shows like “Show Me the Money,” Loco comes off as your typical rapper who spits fire and gets pumped through performances. Maybe it’s because we don’t have access to see him in “real” life like we do with K-pop idols or other rappers who appear on variety shows, but we had no idea he was such a cutie pie. It was interesting and endearing to see him drops bars on tracks like “High No More” and “Dangerous” and then turn and bashfully interact with fans while Gray was rapping his verses. Plus, he has this signature head bob that’s quick and not intense, like he’s bopping to a Disney song, even though it’s rap. When we talk about rappers, we generally use words like “hot” or “dope” to describe them. “Cute” is a word we reserve for idols. Well, Loco is the cute rapper and we’re totally digging it. 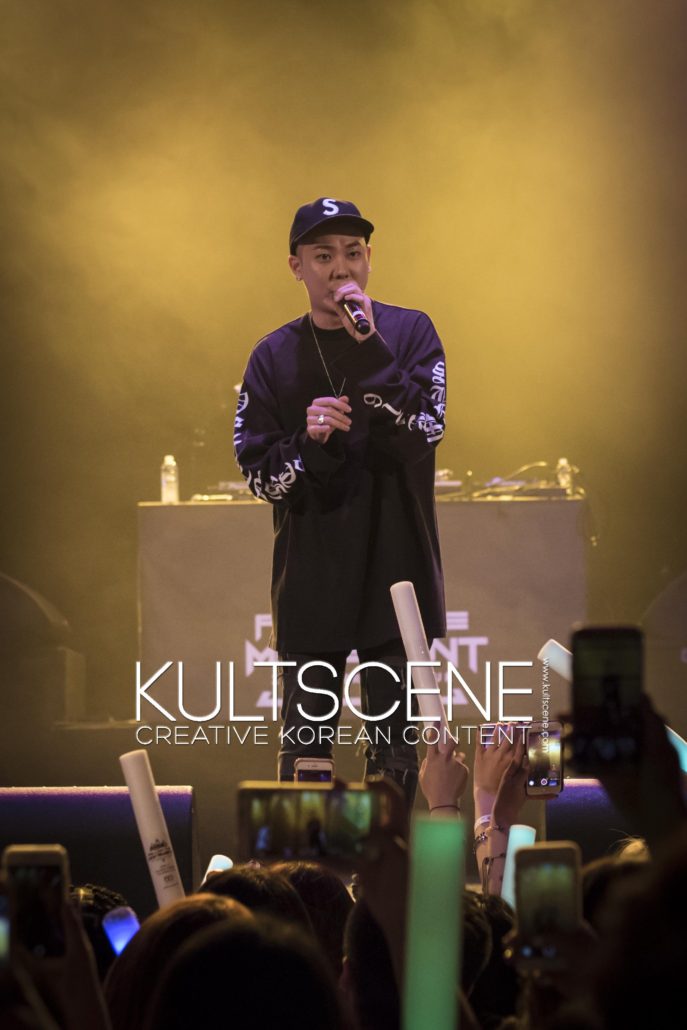 We not only need a Cha Cha beat, boy, we just need him around. Always. For the L.A. stop, Cha Cha attended the show and mostly watched in the side lines. But at the end of the show, when Jay, Simon, Gray, and Loco were all performing together, Cha Cha joined DJ Pumpkin at the DJ booth and even rapped along and repeated punch lines. Why he’s not more involved in the shows is beyond us, but we certainly would appreciate his presence and input more.

6. AOMG is Truly the Best

Somewhere at the start of every set, each rapper explained and apologized for being sick. Despite being ill they were all in high spirits and energy, and even if they said they’re voices might crack or they could cough at some point, it went unnoticed. The AOMG guys gave it their best and it was enough, for there was not a single dull moment in the night.

And to think that Jay and Simon D, AOMG’s CEO’s, at some point could’ve given up on their careers after facing hardships. Instead, they joined forces and created the hottest Korean hip hop label that sets the trends and changes how the genre is viewed. Not only that but they also create and give opportunities to emerging rappers, singers, and producers, all while giving their share of the pie. 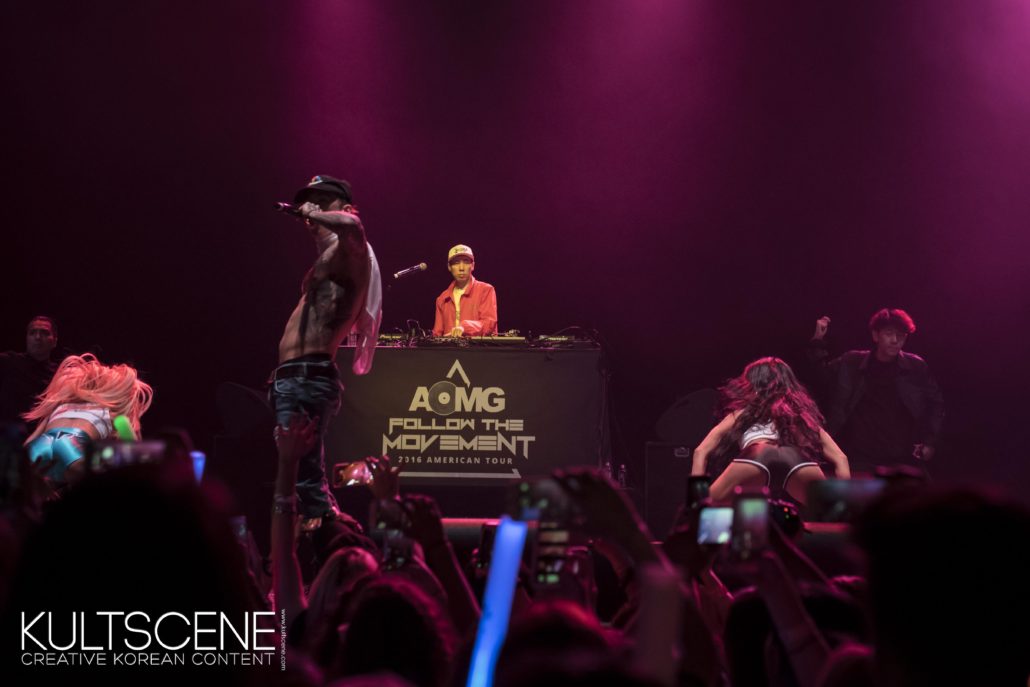 Major entertainment companies like to use words like “family” or “town” to describe their artist rosters, even if this isn’t entirely true. AOMG, however, the thing about them that makes them so rad is the fact that they truly are bros. Whether they’re on each other’s songs, or performing one’s tracks as a group (Jay’s “BO$$” and Loco’s “No Manners”), the genuine camaraderie in undeniable. This is exactly what makes AOMG frontrunners in the game and what will keep on packing shows all over the world. They’re the real deal and they’re shows are fun af. 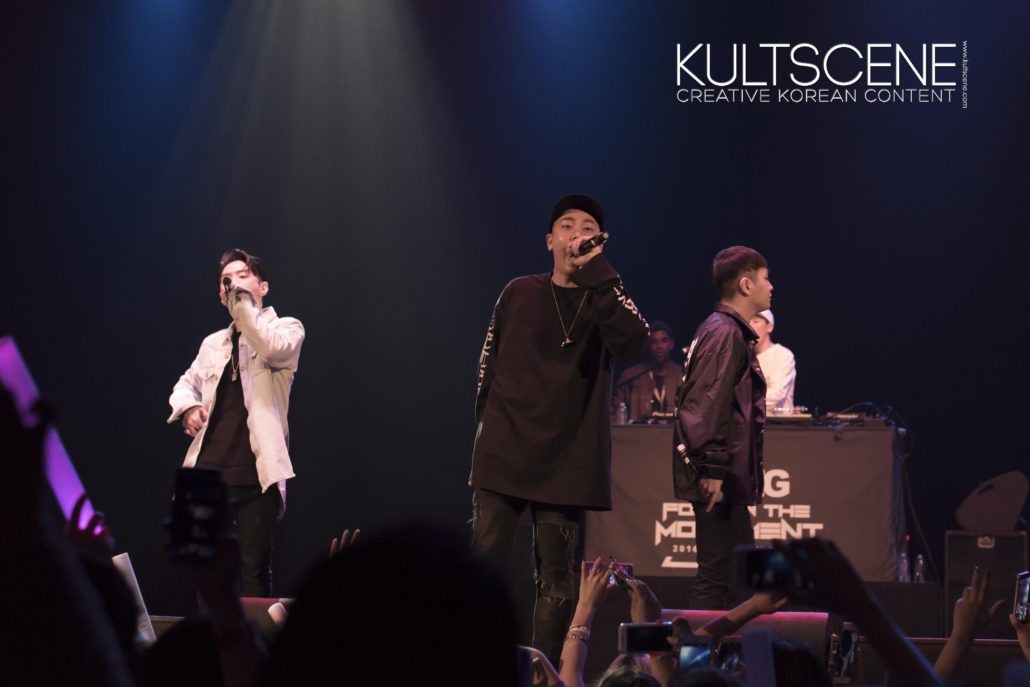