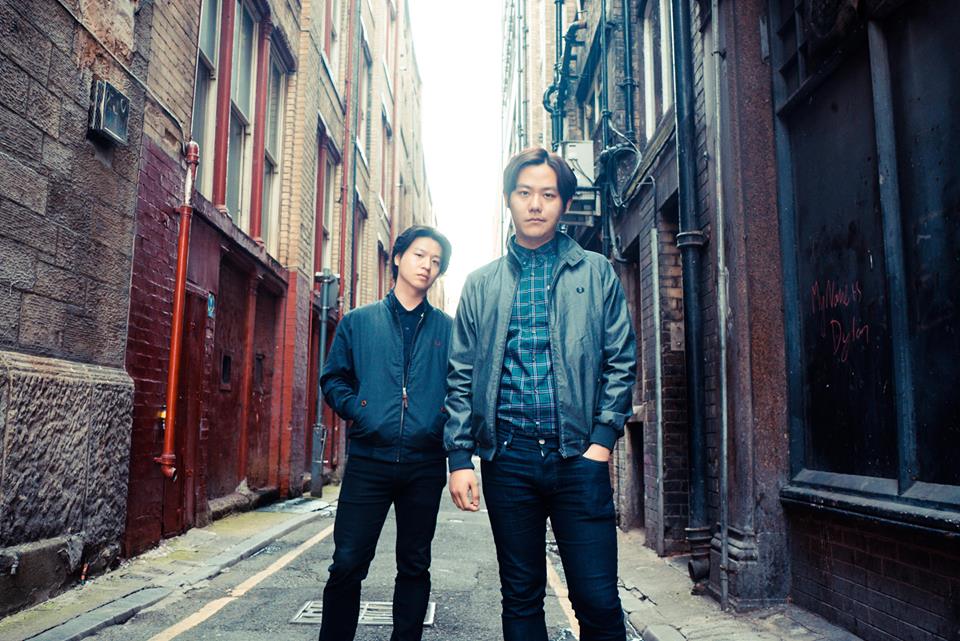 I had the chance to sit down with Dead Buttons earlier this summer to discuss their music, what they’ve been up to, their influences, and why they’re drunk on stage but not in the recording studio.

It’s so nice to meet you. Can you please introduce Dead Buttons to KultScene’s audience.
We play rock ‘n’ roll, and we’re from South Korea. Yea. We’re just a two piece band. We started playing together in 2012. First we were a three piece band. We had two bassists, but one quit, and then the other quit again. We’ve been two pieces for eleven month.

How did you pick the name?
HJH: I liked dead Kennedy and dead weather so I put the word dead, and the word button doesn’t mean anything.

How do you feel your music has grown since you don’t have a bassist anymore?
We can try more styles, new kinds, [without a bassist] because we were like a punk band but now we’re changing; psychedelic, rock ‘n’roll, now we can do everything, we’re not limited. I think that the instrument and player doesn’t matter. We don’t have a bassist, but we have bass. We care about the person who play music, but I think there’s a better chance at working together if we’re just two, face to face. We’re able to work better.

Also on KultScene: Help Us Make Sense of this Interview with K-Rock Band GENIUS

What type of rock ‘n’ roll music are you doing nowadays?
Classic rock, punk rock, pop rock, We don’t define our genres because we want to do all the things we like. We do all kinds of rock. Right now we’re making a kind of reggae tune. We don’t mind [different] genres.

What kind of music do you two like when you’re looking for inspiration?
Too much. Even classical music, yea.

When you two want to make a new song, what do you do.
Jamming, mostly.

What was going to England twice like?
Cool -laughs-

How was it going to England to play, in comparison to Seoul?
It’s very similar within the UK and Korea. Because in UK, there is indie music too like there is in Korea, and it’s also not pretty popular. You have to do something, like if you want to be a popular band you need some media promotion. But we don’t do it like this. We need much experience, so we go to the UK and we hope to have our first tour in Korea, and also go to maybe Japan and Europe. We need much experience to be popular and to be a good band.

Actually, we love traveling so that’s part of it.

How often do you perform in Korea? How is it different playing in Korea versus overseas?
We play in Seoul once or twice a week. Actually, when we played in the U.K, K-pop fans came. I don’t know why they like us, but actually they start liking “K-pop” but they just like “Korean.” They like us because we’re Korean. K-pop, like “Gangnam Style” or the idol music, it’s popular because they have money. We’re not popular because we don’t have money.

We don’t want people to care where we come from, because we are musicians. Nobody cares about that. So, as Koreans, K-pop scene is really different to us.

So you guys want to transcend being Korean musicians and just be musicians?
We’re Korean but we’re musicians in the world.

How do you think the international audience sees you?
When we were on stage the first time, the audience is curious about us to see what kind of music we’ll play. But we don’t play K-pop, so they’re interested to see what else Korea has to offer. Most foreign people don’t have an idea about Korean band music. Even Korea [doesn’t have an idea about Korean band music.] So like it’s a fresh thing to the audience.

You’ve been playing together for two years and you’ve been abroad a lot. What’s the reaction to that here? Like, is that normal for indie bands here to go abroad or are you up and coming?
It’s pretty common. The Korean audience, after we go abroad, they get curious, they want to see what the international audience is looking. When they come to look at us afterwards, we have to grab their attention. We have this chance and do many gigs to attract the curious audience.

What makes Dead Buttons unique?
I don’t know, we’re fat? -laughter- We’re free? We’re not really the same or different from anyone else, we just have to play our music because we like listening to our music. Other bands, they’re doing some really tight music because they have to make this music to make money so all of their practices and gigs, they do tightly in order to make music. We’re more relaxed, we perform every time drunk.

Does any of your music get made sober? When you record, are you drunk or sober?
Actually, I think we were drunk when we recorded our EP. Oh wait, no, I ate chocolate instead. I was really tired. I was really fucked up because of a lot caffeine, I just drank Monster [energy drink] after Monster. We recorded five hours in one day because we don’t have money, so we had to focus a lot. We weren’t drunk because of that. But very high on caffeine.
Our album music is so fast because we were so high. We sing slower in person than our album version of our songs.

I know that you guys are working with Baltic? How did that happen?
First, two years ago at Zandari Festa 2013, a Baltic Records rep came to Korea and saw our gig. So they invited us to the UK, and then again last year at ZF, we were asked to release the album in the UK. So we released it two months ago, and we were in the UK for that.

[Dead Buttons will also be performing at this year’s Zandari Festa.]

What was that like releasing an album in the UK?
It’s just digital, we don’t have a CD. It’s funny because it’s on iTunes, but Korea doesn’t have iTunes service so I couldn’t listen. There’s a big difference between being on iTunes or not being on iTunes in Korea, though.

How did you two meet?
A friend introduced us, who was looking for a drummer. We were drunk, and blacked out, and the next day we woke up to text messages “Hey, we made a band! Let’s practice.” We had drunk like ten bottles of soju on a rainy day, so we can’t remember. We don’t remember forming the band.

When you’re on stage performing, how much of it is improvisation?
We don’t speak when we’re on stage, we just play and play. Actually, we’re not really good at speaking. When we’re drinking, we speak a lot, but when we’re playing, it’s so different. We really love drinking, and traveling, and being with a lot of friends.

What city would you want to play in?
Cuba and Jamaica.

How often do you play in other cities, or do you stay in Hongdae?
Just 4, 5 times a year. 90% of Korean bands are in Hongdae. We like touring, so we plan to go to other cities and see the local scenes but Korea doesn’t have the local scenes. This isn’t even really a local scene. In Daejeon, there is just one band, Burning Hepburn. They’re really cool.

In Jeonju, there used to be the hardcore scene with the MF Crew. Do you know 13 Steps? A lot of the bands from Jeonju though came to Seoul and just disappeared. There’s no audience.

What do you want people to think when they listen to Dead Buttons?
“[It’s] Noisy, what is this, what the f**k, this is so loud, what are they saying?” Korean people don’t really have an idea about rock music. Because popular music is K-pop style. Maybe they call us death metal or hardcore, without really knowing what that is. But we’re retro rock.

Do you guys have any favorite classic rock bands?
HJH: I grew up up with Eagle FM, the US army radio station, so Pink Floyd, Muse, Rolling Stones, Nirvana. Too many.
LKH: I grew up in Paragauy and grew up with Argentina and Brazil’s MTV, so I knew music. I grew up with Green Day, Linkin Park. I moved in 2007.

Do you guys want to go overseas more?
We hope to go to the US but we don’t have a chance yet. We have to have a chance to go to SXSW. Everyone says that it’s hard for indie bands in Korea because it’s Korea, but it’s like that for rock ‘n’ roll bands all over the world. Pop and R&B are big nowadays, and rock is less popular.