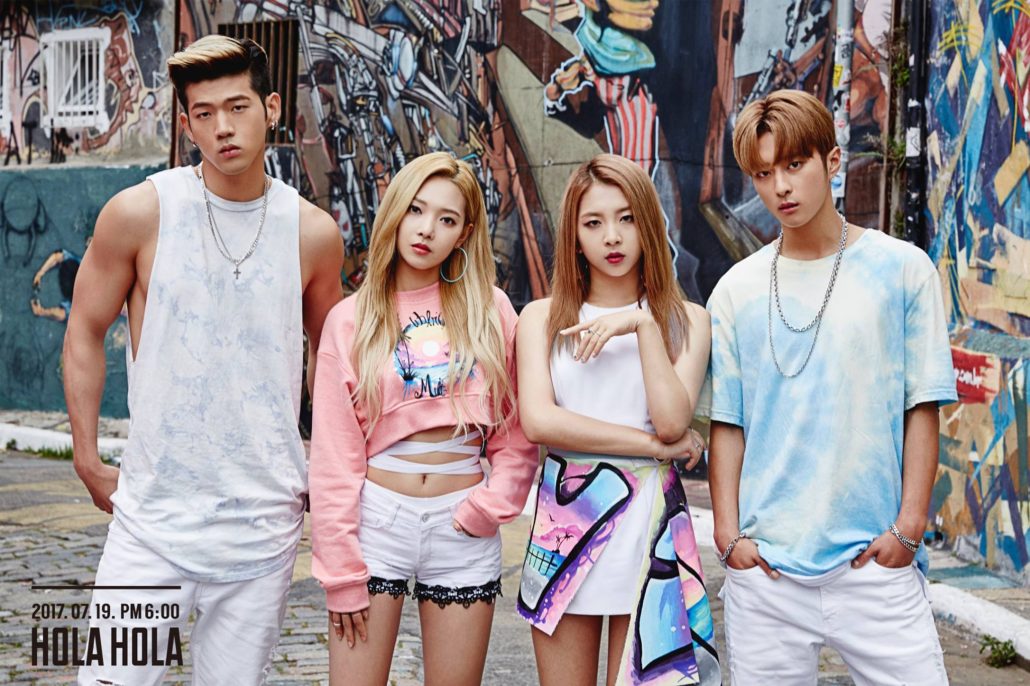 The day has finally arrived. K.A.R.D has made their official debut with breezy dance track, “Hola Hola.” This is the quartet’s first formal single after introducing the public to three pre-debut tracks. Like their previous songs and current trends, “Hola Hola” mixes Caribbean genres with house — a sound which the group has has continuously showcased thus far and one that has garnered so much attention from North and South American K-pop fans.

As opposed to the previous singles, “Hola Hola” is lighter and has an infectious chorus. The pre-debut tracks were slightly heavier and darker compared to this latest one. The lyrics discuss the love two individuals have for each other, and how they want that love to last longer. When the song goes into the bridge, they do a little shout out to their first pre-debut single “Oh NaNa,” which was cute. I was also taken aback by Jiwoo’s part because she deviated from her usual role as being one of K.A.R.D’s primary singers, and showed a new side by rapping. Her verse was filled with attitude and a little sass; homegirl killed it.

I wasn’t really expecting too much from “Hola Hola,” since we’ve grown to know what K.A.R.D’s sound is. It falls into the just right category and fits well. The only small criticism that could be said is towards the end of the song, where BM and J.Seph say “my l-u-v.” It threw me off a little because it ended slightly weird, and I was expecting to hear the “hola hola” part again.

The music video also had its high points. For one, it was shot in Los Angeles, Brazil, Mexico City, and Las Vegas, which fit perfectly with the song. It centered on highlighting the group’s friendship, which came across as very genuine. It’s definitely brighter than their previous videos. The choreography is on point, taking certain dance moves from their past tracks and mashing them together with new ones.

The video was beautifully shot with warm colors and bright scenery. The mountains, walking down the Vegas strip, and driving around in a yellow Mustang gave off that warm summer vibe.

via omona they didn’t

“Hola Hola” isn’t any different from what listeners have been hearing in this particular genre. Does it stand out? Not exactly, but just like every other group that has been experimenting with this style of music, K.A.R.D have found a way to show their unique vocals and their own color to their music.

K.A.R.D’s international success as a co-ed group is impressive. In the past, there have been several co-ed groups in K-pop like Coed School and Sunny Hill, but they did not quite receive the same international attention that K.A.R.D is receiving currently. It is refreshing to see a co-ed group receive this much attention in an industry that is dominated by segregated male and female groups.

With “Hola Hola,” K.A.R.D just may have a chance for a solid career as a group in Korea. They have a sound that fans can identify with and they’re likeable and talented. DSP Media has done a good job at pushing them into a sound that caters to Western fans.

If K.A.R.D does become successful in Korea, which I have a feeling they will, it would be interesting if they’d try other genres of music, like R&B, and incorporate it with their sound. It’s important for fans to still be able to identify it as a K.A.R.D song, but after four tracks with a similar sound, they need to prove they’re not one note. Whatever happens, let’s hope K.A.R.D makes an impact and ruffles a few feathers in this crazy genre we call K-pop.