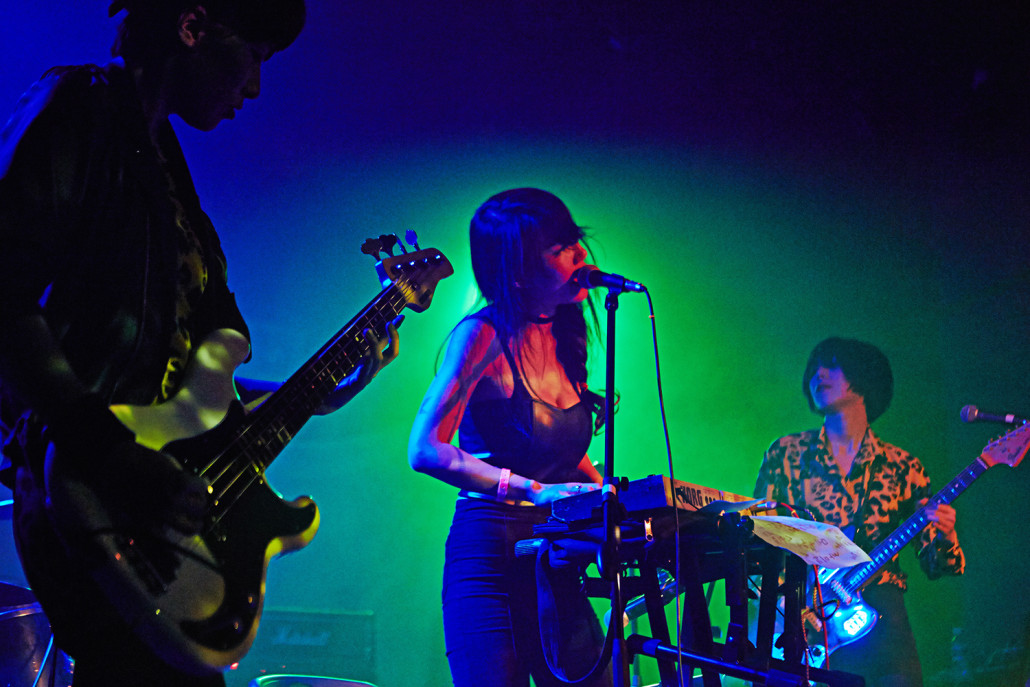 In the last couple of years, Korea has seen a steady increase in female bands, one of which is thepsychedelic noise-rock band Juck Juck Grunzie. The band consists of four members, three of whom are female with an accompanying male drummer. Juck Juck Grunzie spoke to KultScene about their unique band name, influences, their upcoming summer European tour, and much more.

It’s great to have a chance to talk to you. Could you please introduce Juck Juck Grunzie to KultScene’s readers?

Hi, everyone! We’re Juck Juck Grunzie from Seoul, Korea. My name is Jeehye Ham and I play guitar. Ahreum Lee plays synthesizer and sings, Boong plays bass, and our drummer is Kyunghyun Lee. It’s great to talk to you too!
Juck Juck Grunzie usually plays noisy psychedelic rock music. Our band formed in 2007, and we toured Taiwan and released our first full-length album titled “Psycho” in 2013. At the end of June we’ll be heading to Europe to play at the Glastonbury festival and then we’ll also have concerts in London and Berlin. This is our first time performing in Europe, so we’re really looking forward to it!

What’s your dynamic like as a psychedelic rock, female dominated band?

When making music, we try to create songs by jamming together. I think that’s best way to work when making psychedelic rock.
Can you explain the meaning of your band’s name to KultScene’s readers?

Our name is actually a Korean adjective that can describe the feeling of being lonely. Ahreum and I started the band and we chose the name together one day over a bowl of soup.

What’s the reaction in South Korea to your type of music?

I think that many South Koreans don’t really know how to react to our music. A few years back, we auditioned at a concert hall funded by a large Korean conglomerate. And as soon as we started playing our song “Psycho,” one of the judges started to cover her ears with her hands! I guess she wasn’t into it, but that’s okay. The people who do like us are very supportive of our band.

You’ve been together since 2007, when you made quite the splash. What was your thought process when you decided to perform a Nirvana song in lingerie shortly after you began performing together?

For that show, we just wanted to have fun and do something a bit wild. It was a Nirvana tribute night and we had read that Kurt Cobain sometimes performed in his underwear. So we thought it would be fitting to follow suit and do the same thing!

Juck Juck Grunzie sounds a lot less like Nirvana now than it once did. How has your music and the band changed over the years?

We’ve definitely tried to develop our music in a more psychedelic way and have incorporated electronic sounds with synthesizer into our songs as well. We’re trying to paint dreamy, abstract images with our songs. In the future, we’d like to try and make a full record that is centered around more of a unified internal theme.

What has influenced you most as a band and as individuals?

Individually, we’ve all been influenced by a wide range of things. For me [Jeehye] personally, I’ve been very influenced by ‘70s rock guitarists and classic rock ‘n’ roll acts like The Doors and Chuck Berry.

When people think of Korean music, few think of rock. How has the response been overseas?

When we played in Taiwan, people seemed to like what we were doing. I think with our upcoming gigs at Glastonbury, London, and Berlin, we’ll get a much better feel for what overseas rock fans think of Juck Juck Grunzie.

Juck Juck Grunzie is playing in Europe this summer. What are you looking forward to seeing in Europe and from your audience?

We’re looking forward to being able to watch the number of amazing acts during the time slots that we’re not playing at Glastonbury. And while we’re in the UK and Germany, we’re looking forward to talking to music fans and other musicians and trying lots of new foods. This trip is going to be really cool. We can’t wait to start our European tour!

Your last album was “Psycho” in 2013. Are there any plans for new music?

We’ve got a few new songs written right now and we’re going to be playing two of them during our sets in Europe. We’d like to start recording our new album after our European tour. We’re hoping to release it sometime next spring.

Do you have any final words for your international fans?

If any of you will be in England or Germany during our tour, please come check us out and say hi! We love meeting new people. Thanks so much for reading about Juck Juck Grunzie.