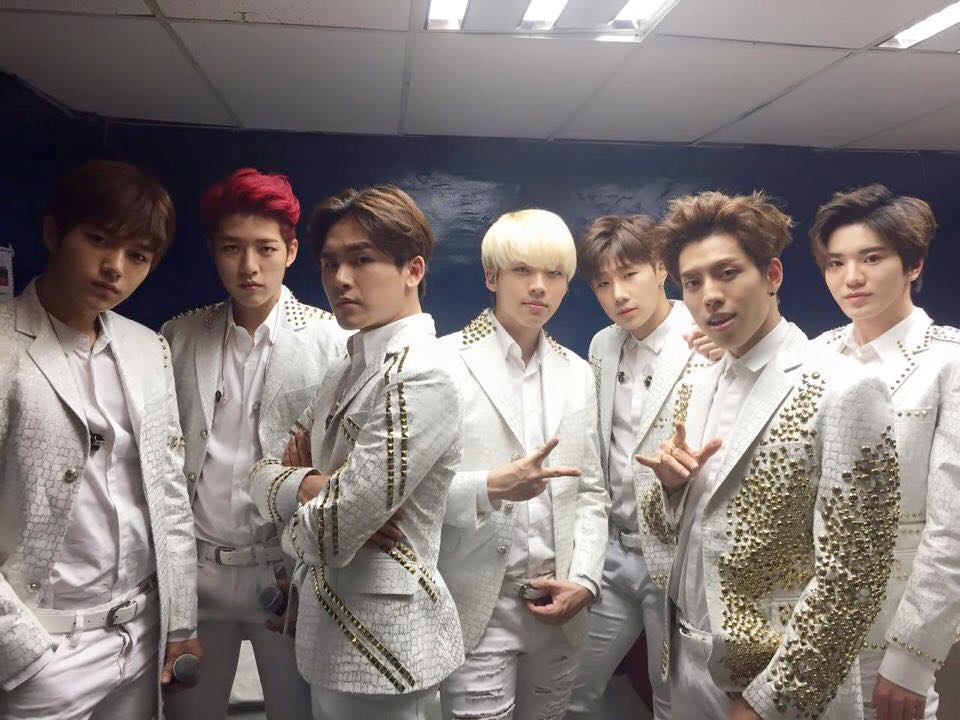 Three years ago, INFINITE got one of the worst — if not the worst ever — send offs for the U.S. leg of their first world tour “One Great Step” in New York. Crowds of fangirls in the pit pushed and shoved each other to the point that some fainted and the members themselves had to try to appease them in between songs. With the Los Angeles stop of their INFINITE Effect world tour at the Microsoft Theater on January 10, the first of two shows in the States, the stakes were at an all time high to start off in a good way, both for the fans’ behavior and the group’s smooth performance.

The evening started out the usual way: INFINITE’s music videos were played on the screens, which fans sang and danced to while they waited for the show to begin. But after the “Bad” music video and the opening concert videos (VCRs) played, the lights went out and the member’s silhouettes appeared behind a white screen. Screams and loosing-of-shit ensued. When the curtain finally fell, the INFINITE boys, decked out in white costume suits, immediately proceeded to perform “BTD,” “Paradise,” and “Be Mine” together with a live band.

In K-pop, the usage of live bands in concerts is rare. Bringing musicians and their instruments along for the trip with the rest of the crew is expensive. In my experience, I’ve only seen huge groups like 2NE1 and BIGBANG have musicians play their songs live during their shows. Plus, most K-pop songs are produced entirely in computers that only require a sound engineer to hit play. INFINITE’s sound, however, lies somewhere in between the two spectrum of eclectic instrumentals and retro beats. Believe me when I say you have not fully experienced songs like “Destiny” and “The Chaser” until you hear it with live instrumentals. And INFINITE’s management knows this for they’ve continuously brought bands on their world tours, like any world class artist would.

If the live music is what brings INFINITE’s songs to life, their vocals are what nourishes them. They were simply too damned good. In fact, I thought they were lip syncing throughout the show until Woohyun was noticeably caught up in his feelings during “Footsteps” and “Love Letter.” Actually, all of the members seemed visibly tense throughout the first portion of the show. It wasn’t until the solos and sub-unit performances that the guys finally loosened up. Sungkyu kickstarted our feels with “Kontrol,” Woohyun poured his soul onstage with his self-composed song “Everyday,” INFINITE H got everyone pumped with “Sorry I’m Busy” and “Pretty,” while INFINITE F sent us into diabetic coma with “Heartbeat” and “My Girl.”

Throughout their career, INFINITE has been known for their elaborate costumes. However, with their latest comeback, the guys are being styled in a more modern and urban style. That look carried was carried the tour as INFINITE was decked out in several Versus, Off-White, and Astrid Andersen numbers. The only other costume look they wore was for the encore and it was a simple black and red blazer and pants look. Truth is, when wearing the casual outfits, the members seemed more relaxed and delivered fun performances of “Nothing’s Over” and “Entrust.” For “Cover Girl,” INFINITE even risked their lives and came off the stage and onto the different aisles of the venue where fangirls mobbed them. It was cute, completely unexpected, and nerve-wrecking, considering American Inspirits’ notoriety.

Actually, the members didn’t shy away from interacting with fans throughout the whole show. Dongwoo sang to fans directly, held their hands during songs, and even had conversations while the other members spoke to the audience. L kept it cool and swooned more than one fangirl with his winks. Hoya thanked fans for their support through his recent knee injury and assured he was fully recovered. Sungjong and Sungyeol took many phones from the audience to record videos, and Sungkyu even took selfies with a few others. Woohyun, who started out the concert looking a little down, was all smiles and seemed very proud of himself when talking about “Everyday.”

For the last part of the show, INFINITE definitely saved the best for last for they delivered stellar performances of their recent hits “Back” and “Bad,” and, of course, the classic and ethereal “The Chaser.” And even if the set list excluded jams like “Man in Love,” we got a good compromise with “Moonlight,” off of their newest album. Moreover, they performed only a couple of ballads. But rest assured, INFINITE only needed one shot to show their vocal strength and growth, and that was with the flawless interpretation of “Between Me & You.”

But, as we all know by now, the show doesn’t end when they say it does. Quite fittingly, the boys came back for their encore to the sound of “Come Back Again” and bade farewell with “Together.” For their closing remarks, the boys thanked everyone involved in “INFINITE Effect” and the fans as if they had won an award. They even hinted at an INFINITE F comeback and promised fans they would come back sooner than they did this time.

I’m sorry for other K-pop acts for saying this, but INFINITE is the real deal. Not only do they sing really good live, but they dance in perfect synchronization without missing a beat or ruining a note. Moreover, the live band enhances the whole experience by bringing out the elements of what makes Infinite’s sound great. With all this in mind, it’s impossible to limit them to the generic and plastic box of the forgettable boy bands that are just pretty faces who barely sing. INFINITE are true artists and performers, and “INFINITE Effect” is the testament of it.