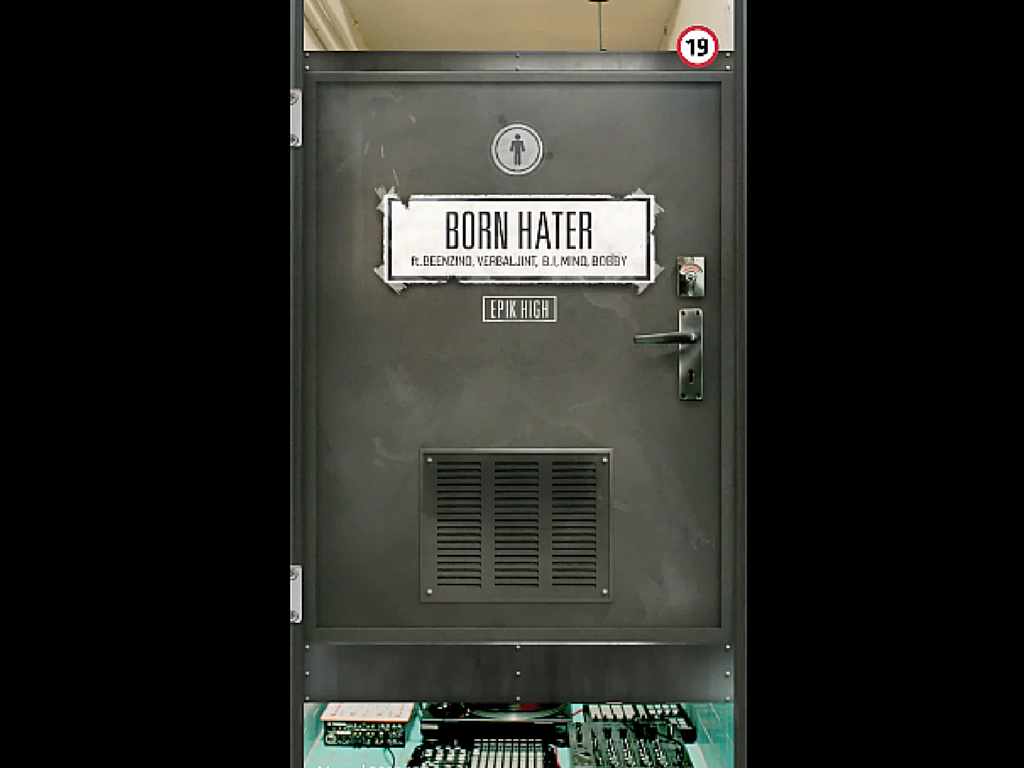 Talk about a comeback. Epik High‘s Born Hater easily reached over 1 million views within its first 24 hours of being released on YouTube. Beenzino, Verbal Jint, Mino, Bobby, and B.I are all featured on the track and all appear in the video. Each rapper has his own verse, where he addresses the haters in themed bathroom stalls (more about that below). In short, the song and the video are brilliant.

The setting of the music video is a male public bathroom with numerous stalls. The video starts with a stall door holding all of the information for the song and DJ Tukutz’s gear is seen beneath the stall door. He starts out the video in one of these stalls as he mixes his beats.

Why bathroom stalls, one may ask? Well, I’m not quite sure but I can speculate. The song is titled Born Hater, which instantly tells the listener that the song will address the haters out there. Maybe the bathroom was chosen for the link to shit. Because haters talk shit, Epik High and guests are basically telling them to eat shit because they don’t know what they’re talking about.

Or maybe it’s to show that even though Epik High is well-known in the industry and have been around for over 10 years, they want to show that they are still human who still use the same porcelain toilets as the rest of us. Again, these are speculations, but make sense given the facts in the video.

There are times throughout the video that the scene changes from the original stall of each rapper to a stark, white, non-furnished bathroom. This bathroom is much deeper than the original stalls and has no color, except for the few props that are scattered toward to front of the stall. To me, this bathroom represents the person’s attitude toward the haters right now: nothingness. It’s like their own little asylum where no one can bother them. They are void of all the hate and clutter while in that room. It is their safe haven where they can release all their anger and emotions.

The music video, right from the beginning, is a vertical screen. This could be for many reasons. The music video takes place in bathroom stalls, which are narrow and private. The screen helps to portray that feeling. It also could be an ode to Epik High’s album title, Shoebox, in that the screen imitates the shape and depth of the inside of a shoebox.

The transitions throughout the video solidify the fact that this takes place in a public bathroom with many stalls. The camera quickly slides over to the next stall for the next verse. There are moments of a pan to the left/right in correspondence with the lyrics, which again add to the feeling of being in a bathroom.

The zoom never goes in extremely close to each person. However, there is the initial view of the overall stall, and then the zoom in to focus more on the person of interest at that time in the video. The zoom is not abrupt or rough, it flows smoothly and works well with the transitions and the style of the video.

Each member of Epik High, as well as the featured rappers, has his own bathroom stall that is decorated to correlate to their verses. Each stall and person within it is also a representation of the Seven Deadly Sins: 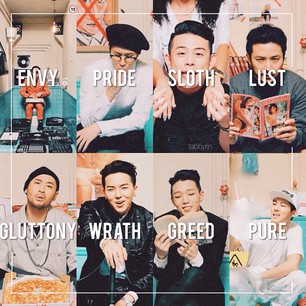 DJ Tukutz’s stall is filled with DJ equipment as he mixes the beat to start the song and throughout it. His bathroom stall is quite literal in that he always makes the beats for Epik High, and this song is no different. Tukutz sits quietly in his stall, minding his own business producing his beats. No one else is in the stall with him and he rarely, if ever, looks at the camera. His hunched position as he sits and his sunglasses imply that he doesn’t want to be seen or that no one ever really notices him. Tukutz represents Envy in that he’s always in the background of Epik High and never really in the spotlight.

Tablo is surrounded by paintings of well-known artists (Dali, Van, Picasso- also a reference to Beenzino’s single) with huge red X’s over most of them, which alludes to Tablo’s Pride that he’s the best. To add to the painter motif he wears a beret. Along with the paintings, there are cockroaches scurrying all over the floor, walls, and Tablo. Throughout his verse, he’s constantly stepping on them, squishing them, and spraying them with pesticide. The cockroaches are all of the haters that keep coming at Tablo even when he continues to shut them down.

Beenzino is said to be Sloth. Sloth can be described as not utilizing one’s gifts and talents. This makes sense in that his haters think he gained his success through other means, like his looks, rather than his talent.

I can’t believe they say my success comes from my looks.

The Nike shoe boxes pose a bit of confusion to me. Maybe it’s a sign of his success and wealth. Let’s be honest, a lot of hip hop moguls show off their new kicks on SNS and the amount of Jordans one has in their closet seems to correlate to the amount of wealth one has, which also goes along with Beenzino’s lyrics that he is everywhere (meaning his music).

[Writer’s Edit: One of my fellow kultscene writers mentioned that the Nike shoeboxes represent Beezino’s song Nike Shoes and the girls that appear correspond to a line from that song:

Nikes on her feet make my love complete.

Hence the piles of Nike shoeboxes and the three girls who appear sitting among the boxes.]

B.I first appears during Beenzino’s scene as he’s trying to sweep the stall dressed in all white. He is the uncontaminated one trying to clear the mess in each stall. The all white implies purity, and since B.I has yet to debut, he is fresh and doesn’t have the amount of haters that his predecessors do. He isn’t tarnished by criticisms or harsh critiques.

Some of y’all are born haters
Male, female, old, young, distributed across all levels of society
Whatever I do, they respond with their innate shallowness

Even if Verbal Jint does something that everyone else is also doing, he still receives hate because he’s in the spotlight. People respond to his actions without knowing the full story.

Speaking of B.I, he is in charge of vocals throughout the song. He sings about being a rookie in the business and how one has to have the drive and ambition to succeed in the entertainment world. The closing words of his verse explain it all:

it’s motherfuckin do or die.

His scene shows him in Tukutz’s stall cleaning around his equipment and in his own stall that is sparkling clean with nothing on the walls or floors. Because he hasn’t officially debuted, his stall is clean and clear from all the haters’ comments.

Mithra embodies Gluttony with a loose fitting shorts-jumpsuit and boxes of pizza, containers of french fries, bags of chips, etc. in his stall. Gluttony can also be connected to selfishness. Mithra, at this point in his career, doesn’t care about anyone else in the game. He’s heard it all and only does what he wants to do.

Mino’s rap is a different beat than the others. Up until this point in the song, everyone’s rhymes and verses are on beat with the music. But Mino adds a little bit of asymmetry, which makes the listener tune in even more because the flow is slightly interrupted, in a good way.

He represents Wrath in many ways. The baseball bat he uses to smash the camera lense, the wine bottles behind him in the stall, which allude to self-destruction, and his overall destructive behavior. Mino’s lyrics for his verse are basically proving that he got to this position with his own talent, not because of his company. And he basically says if you don’t like him, then don’t pay attention to him, as simple as that.

Bobby is clearly the personification of Greed, with the gold chains, gold mirror, the money strewn all over the floor, the gold theater ropes, and the gold champions belt hanging on the wall. Also, the stacks of cash he nonchalantly throws around the room and gives to B.I. His lyrics state how people have noticed that he’s changed and he agrees. He wants the fame and fortune, but obviously has the talent and drive for it.

B.I closes out Born Hater with the chorus as he continues to clean the stalls. He also adds his own rap. In his rap, he explains that he’s different from the cookie-cutter singers and rappers you see on TV. And the fact that he’s on TV while his haters sit at home and watch and complain about him, proves that he’s doing something right. During his scene, he’s in a stall with Tukutz, Mithra, Tablo, and a few girls. Meanwhile, B.I is in the middle of the stall and everyone else is bobbing their head to the beat and looking at him as if in agreeance with what he raps.

At the end of B.I’s verse, Tukutz starts DJing and B.I tries to get in on it, but Tukutz pushes his hand away and continues to look at him as if to say, even though you are talented, you’re still young and have to respect your hyungs. After that interaction, B.I has a look of obedience on his face.

The video overall has a lot of symbolism within each stall and each rapper’s verse (which is impossible to touch on in a basic review). Some comments on the video stated that they wish Epik High was in the video more, but I like this song and video. Yes, it is an Epik High song, which implies that they are the main attraction of the song and video. But the fact that they have veteran, new, and upcoming rappers on the track shows their inclusion and understanding of where hip hop was when they started and how it’s evolved over the years and will continue to do so.

The song has an amazing beat, great rapping, and is definitely one of my favorites of 2014. The colors, style of the music video, and the beat —especially the beat– of Born Hater remind me of a Beastie Boys song and music video, which, to me, is a really good thing.