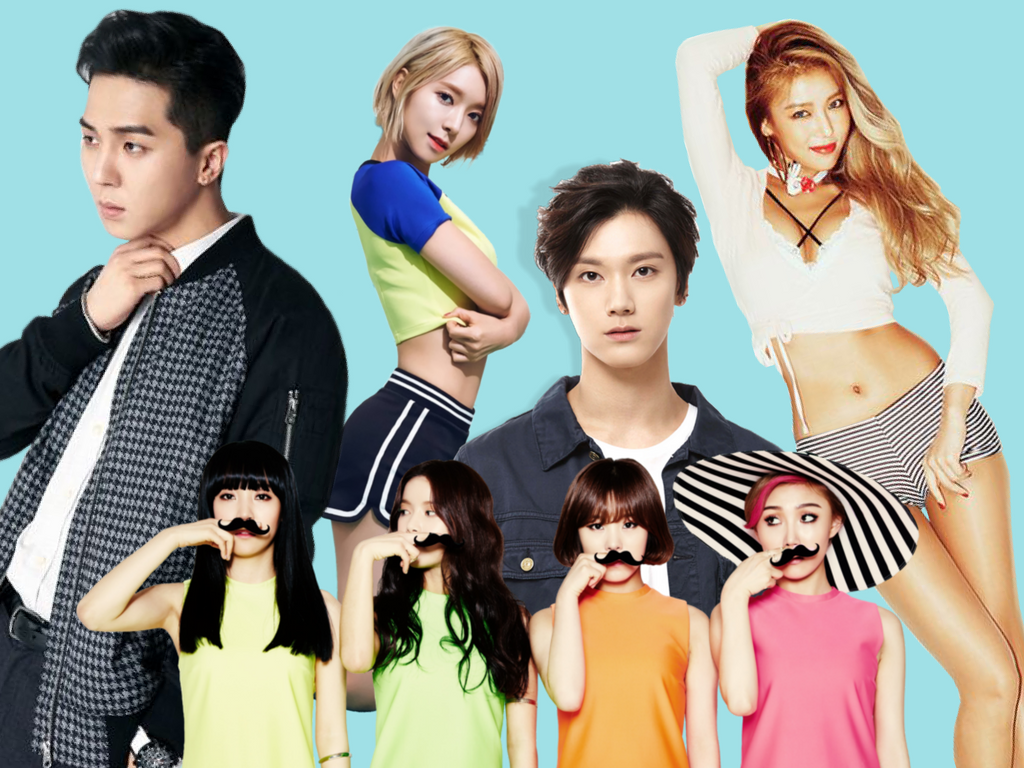 The magic of K-pop lies in the fact that you can’t exactly separate the music from the visuals, or the dance and the personality of the artists. It’s a full entertainment package that’s not exclusive to music. Actually, as we’ve mentioned in a previous article, it’s hard to describe what kind of music K-pop is because it can presents itself in various genres and styles.

So far, in 2017, we’ve been hearing styles such as Caribbean–house hybrids, future bass, synthpop, new wave and disco in lots of K-pop hits. Still, many K-pop acts sometimes venture on different and not so usual genres too, and they all absolutely nail it. There are many examples of K-pop songs that flee from conventional. It’s a bold take to bring up something from a different style or culture, but K-pop adds its own touch to it, in a fun and non-appropriative way. Let’s check some examples of music styles that we’d love to hear more of.

Electronic music is by no means rare in K-pop. However, this subgenre is not so commonly explored —maybe because techno exhibits few musical elements over the beats and “few musical elements” is something hard to introduce in K-pop, more known for being loud and overloaded.

When it does happen, though, it’s awesome. The fast-paced and repetitive beat is perfect for storytelling lyrics full of tension, like in 2010’s E.via bop “Pure Love of a Maiden” (although there’s controversy about considering E.via as K-pop, since she was a rapper; her instrumentals and visuals were very pop-oriented, though) and Dreamcatcher’s “Sleep-Walking,” a great b-side of their 2017 mini album.

Jazz is the oldest music genre you’ll see on this list. Also, interestingly enough, among all of the genres listed, it’s the one with the biggest influence in K-pop. The smooth piano and the brass instruments are often heard here and there, like in B.A.P.’s “Coffee Shop” or Ladies Code’s “Bad Girl.”

However, it’s really fancy and unique when K-pop sounds like jazz in a full way, letting it dictate the whole direction of the song instead of only inspiring the production. Jazz has lots of subgenres and we’ve heard some of them in K-pop. Amber Liu’s “Shake That Brass” and Ailee’s “U & I” follow the style of big band jazz songs. On the other hand, Girl’s Day’s “Darling” is more like swing jazz, and Girls Generation’s most recent album brought the standard vertent in “Love is Bitter.”

Jazz also works fantastically to showcase the vocal skills of female vocalists, like in Spica’s “You Don’t Love Me” and the Ailee song previously mentioned. As you can see, in the fusion of K-pop and jazz, the possibilities are multiple.

Few years before Meghan Trainor and Charlie Puth revived doo-wop trend in mainstream America, K-pop girl group Secret explored the retro concept in 2011 with the cute and bright “Shy Boy.” (By the way, doo-wop is the genre that revealed the first girl groups ever in the world: The Chantels, The Ronettes, The Marvelettes etc.).

As for the boy groups in K-pop, the doo-wop sound is mostly executed in its softer and romantic version, which in turn gets a sexy touch in K-pop, as we heard on Winner’s “Baby Baby” and Highlight’s “Danger.” Retro concepts are very current in K-pop, so doo-wop might be a nice genre to be explored more.

We’ve heard touches of reggae in lots of recent K-pop hits due to the Afro-Caribbean-house trend that has been going on since 2016, like in BTS’ “Blood, Sweat and Tears” or any of K.A.R.D.’s singles. But reggae? Just reggae? Not so common.

Wonder Girls did it and were extremely successful, achieving an all-kill with the fantastic and jam-alongable “Why So Lonely” in 2016. Not so much in the K-pop spectrum, we had Primary’s collaboration with AOA’s Choa, “Don’t Be Shy,” and G. Soul’s delicious “Far, Far Away.” While it always had a light presence in their earlier songs, 2NE1 did it more directly on their last album with “Come Back Home.” The calm vibes of reggae go along pretty well with the sultry voices of many K-pop vocalists, so we’d love to see more reggae tunes in K-pop.

With the right vocals and production, synthpop can sound like a very cosmic and relaxing experience. Some boy group members such as NCT U’s Ten and Topp Dogg’s I’m (아임) have shown their elegant songs “Dream in a Dream” and “Save Me,” respectively.

In “Dream in a Dream,” the adding of traditional Asian sounds makes the song even more fascinating, like a travel in space and/or time. And due to the beautiful heritage of Korean traditional music and instruments, I think K-pop could use elements of it more often. As for “Save Me,” the main structure of production of the song is no different than synthpop ballads commonly heard in K-pop, such as Taeyang’s “Wake Me Up.” “Save Me,” however, has a strategic choice of sonic elements, like reverb, that give the song an ethereal vibe. Soft jams are always so well executed by K-pop artists, why not have more of that with an airy feel?

I’m Brazilian, and as such, I can’t help noticing whenever a rhythm of ours is used in K-pop, even if so far ibrief. Korean indie music has a love affair with bossa nova, one of our most acclaimed music genres. It suits perfectly to the coffee house vibe that Korea loves. In K-pop, we have lots of sweet examples too, such as Lovelyz’s “My Little Lover” and Mamamoo’s “Words Don’t Come Easy.”

Samba is also one of the biggest symbols of Brazilian culture, and can be heard in Elris’ “You and I” and in the bridge of f(x)’s “Rum Pum Pum Pum.” Less known overseas but just as effervescent, technobrega (a style arisen from the northern State of Pará) can be heard in the pre-chorus of Twice’s “Cheer Up.”

Like said in the introduction, K-pop is worth of compliments due to the fact that they incorporate those rhythms without signs of stereotyping or disrespecting the cultures they are channelling. Latino rhythms are used more than Brazilian ones (we even highlighted some latin inspired songs here), but as a Brazilian, I feel like I have the right to bring up the times our music had made itself present in K-pop and emphasize its autonomy from the music of other countries people often mistake us for.

Already mentioned on this list, Dreamcatcher has been catching (no pun intended) the attention of K-pop fans due to their distinctive resistance to release synthpop, aegyo inspired music heard in most K-pop girl groups of the moment. Instead, they’ve been betting on the sound that is already familiar to fans of Japanese rock (J-rock), which is largely influenced by punk rock and heavy metal.

I was unsure of inserting this style in this list, since Dreamcatcher has been using it so consistently as a concept itself that suggesting other groups to do it as well might seem like a straight copy. However, when PRISTIN released “We Like,” I instantly fell in love, like described in our Weekly Pop Faves at the time. The punk-rock influences in the chorus and pre-chorus, combined with the chord progressions and the group vocals, reminded me of punk rock female bands such as Halo Friendlies and girl power british pop punk groups from the 90’s like Shampoo.

K-pop itself is a force to be reckoned with, so there’s no need to follow the same steps as Japanese rock bands, but it would be great to hear more punk rock influences like these, even if only in some parts of the songs.

The story of LOONA: The first five girls
Scroll to top
×
Loading Comments...