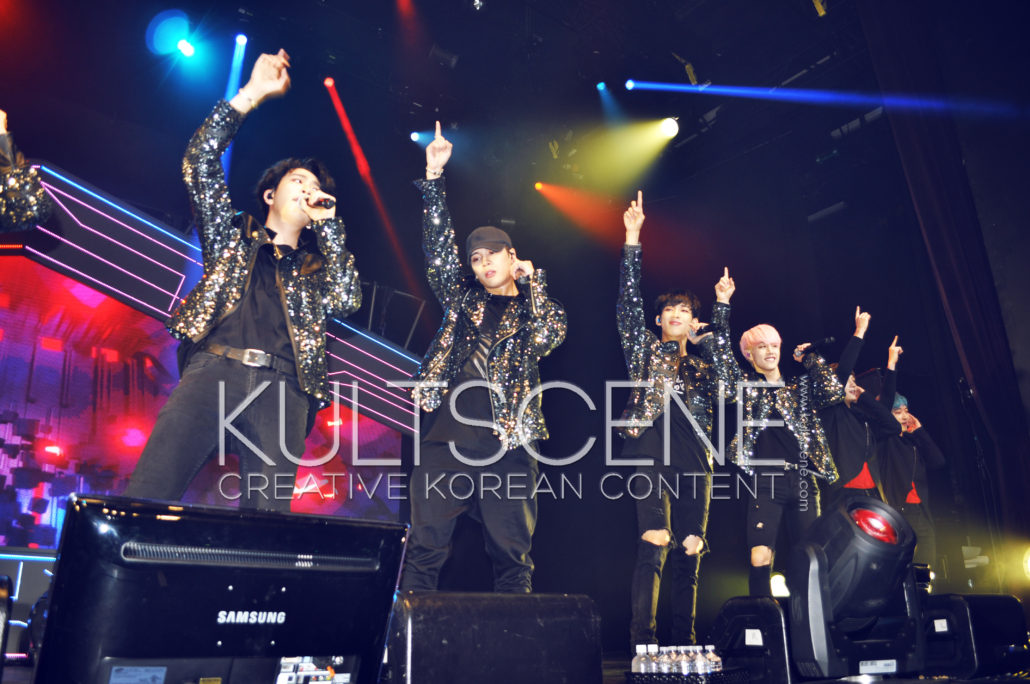 After two weeks of dabbing through the US, GOT7 closed their first American tour in Los Angeles at the Novo DTLA on July 11. Their last show was an addition after the original LA show sold out quickly and fans demanded a second date to accommodate IGOT7’s (GOT7’s fans), a fanbase which has notably grown since the last time the group was here.

But after shows in every major US city, several interviews with them, and thousands of fan cams and accounts recounting everything the guys said or did, what is there left to say about GOT7’s US tour? Well, other than it being an amazing show, it was also an opportunity to witness just how much GOT7 has grown in two short years since debut. So instead of being redundant and telling you things you might already know, here are some highlights from the show and a rundown about the things we learned at “Fly in Los Angeles.”

In K-pop, it’s commonplace that idols lip synch during their concerts so that they can focus on powerful performances. Not GOT7 though. These guys kicked off the show singing live and hitting every move with “Put Your Hands Up.” They may have slowed it down here and there throughout the show with the more vocally demanding songs, but still it was a balancing act they mastered. 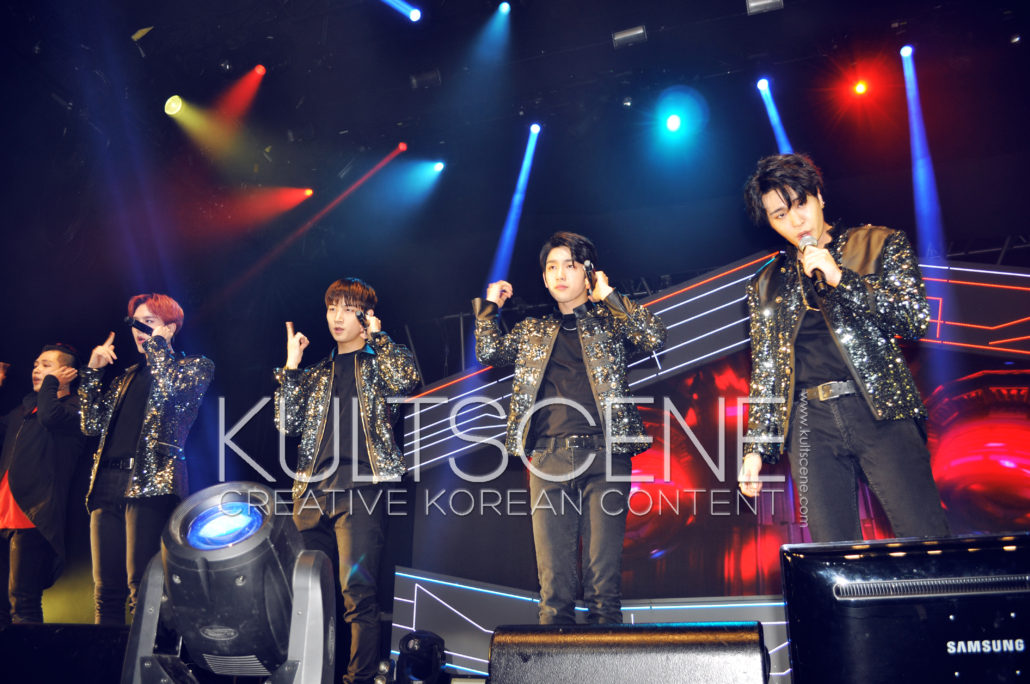 2. “Can’t” Is The Best Thing That Could Ever Happen To IGOT7’s

Let’s give credit where credit is due; “Can’t” is one of the best songs on their latest album “Flight Log: Departure.” It has a bubblegum bumpy hip-hop beat that, together with the buttery delivery from the vocal line at the chorus, creates an interesting and yummy sonic experience. Now, how this group went from GOT7 to THOT7 with the choreography for this song is beyond us… but greatly appreciated. Those crotch rolls and invisible love making to the floor was well worth the ticket price by itself. We never thought GOT7 would ever measure up to the Chippendales-like shows their seniors 2PM put on. But with “Can’t,” fans now have hope.

“Fly in USA” was the “Give GOT7 Their Kudos” tour, for they emphasized all their lyric writing achievements on this album every chance they got, giving each other handshakes and requesting applause from the audience. And it was well-deserved. Junior came up with the lyrics for “Can’t,” and Bam Bam put his “rapper” role to good use by writing the rap for Youngjae composed “Rewind.” But the clear standout (#sorrynotsorry) was JB and Youngjae’s ballad “1.31 am.”

Sitting with their backs to each other, Youngjae caressed the piano while JB unloaded his truck-full of feels onto the microphone. Named after the time in which the song was written while in Japan, the unreleased song brought the audience nearly to tears with the heartfelt performance, proving these two could easily kill it with a vocal a-la 2AM sub-unit. Their styles might be very different, but there’s something about the mix of JB’s soulful vocals with Youngjae’s angelic tone that just works. 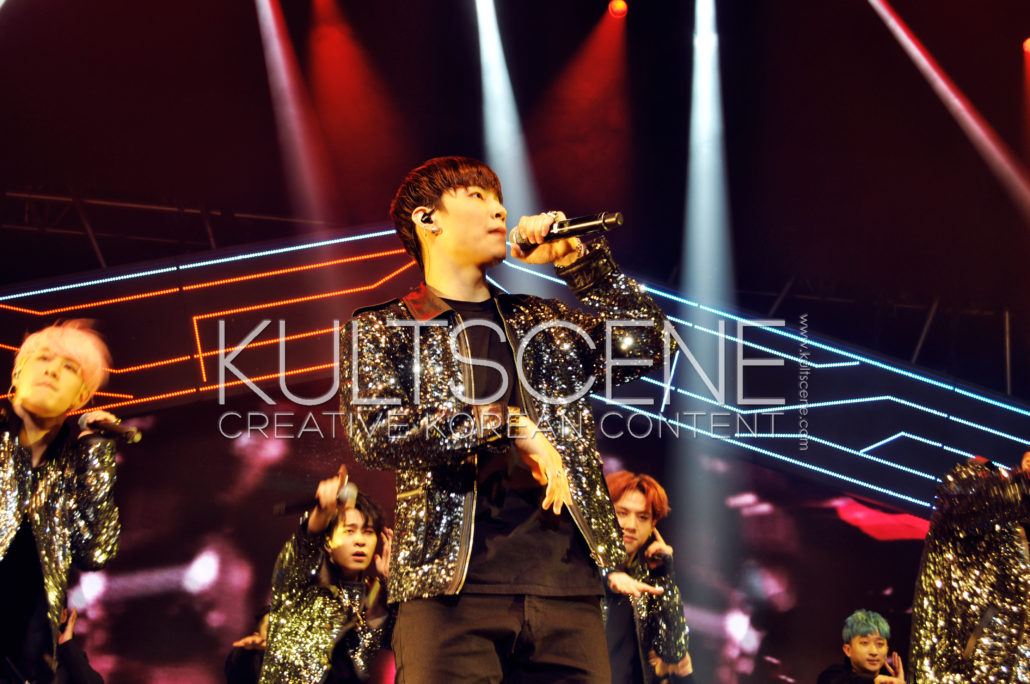 4. … Seriously, Witnessing “If You Do” & “Fly” Live Are Bucket List-Worthy Experiences

If we’re gonna pick favorites, the performances for “Fly” and “If You Do” are definitely at the top. This, of course, is due to the fact that both songs have the most intricate choreographies in GOT7’s discography to date and require the most energy from the boys. But after two weeks of touring, a sick member, and another member with a bad back, the performances could’ve easily fallen flat. And yet, there was not a missed beat on either song. Maybe it was because this was GOT7’s last show of the American tour or maybe their worth ethic is just that good, but the boys managed to give it their all with the choreographies. They even broke the monotony of the song and changed pace, expressions, and freestyle moves. The honorable mention goes to “Just Right,” for Bam Bam and Jackson took their last verses to indulge in a back and forth with the crowd instead of doing their normal parts, which was a fun little interaction with the fans.

5. Someone Give JB A Cold Shower. JK, We Love It

And speaking of “If You Do” and “Fly,” geez, JB… While Yugyeom is GOT7’s main dancer, Im “No Chill” Jaebum trails at a very close second, and that was apparent during “Fly in LA.” Truth is, JB was in his feelings throughout the whole show, but it was especially noticeable during his exaggerated yet much appreciated body rolls in “Stop Stop It,” which lead to his Best Actor in a Drama-worthy performance in “If You Do.” I don’t know where he draws all that angst and anger from, but the boy was definitely going through some stuff in his head, which just proves how much of a pro the leader is. 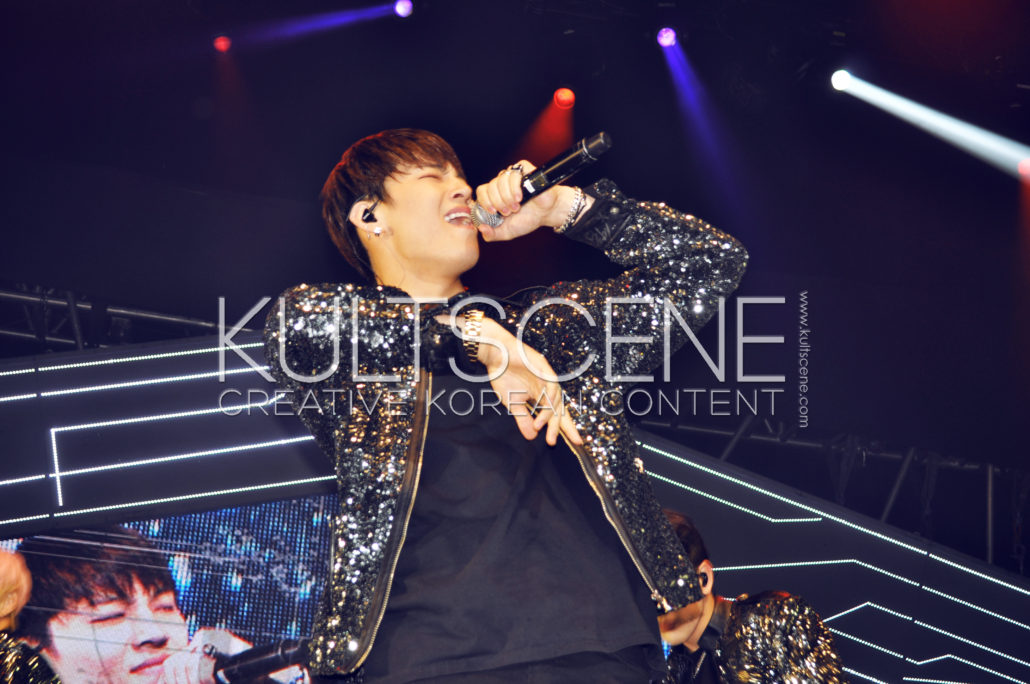 6. Youngjae Is A Real Trooper

After missing the tour’s opening show in Dallas and making lots of fans upset and concerned over his health, Youngjae powered through his high fever throughout the whole tour. Even though the second LA show was a little over a week after Dallas, GOT7’s sunshine was visibly not as bubbly on their closing night. However, Youngjae must have taken care of himself as best as he could given the circumstances because he slayed all of his vocals as if he were at 100 percent. He might have channeled his energy towards his singing instead of his performance, because the latter was definitely not on par with the rest of the members. But still, he was amazing and everyone was thankful he endured his sickness for the fans.

7. Breaking News: Jackson Was NOT Extra

In the weirdest of plot twists, GOT7’s resident megaphone that always does too much was actually quite tame during the last LA show. As mentioned before, maybe it was due to fatigue, but other than some light bullying and laughing here and there, Jackson was not his usual extra self. In reality, it was Bam Bam who took over the position and delivered many zingers and comedic moments throughout the show like singling out a guy on the second floor and trying to make a couple in the pit kiss. 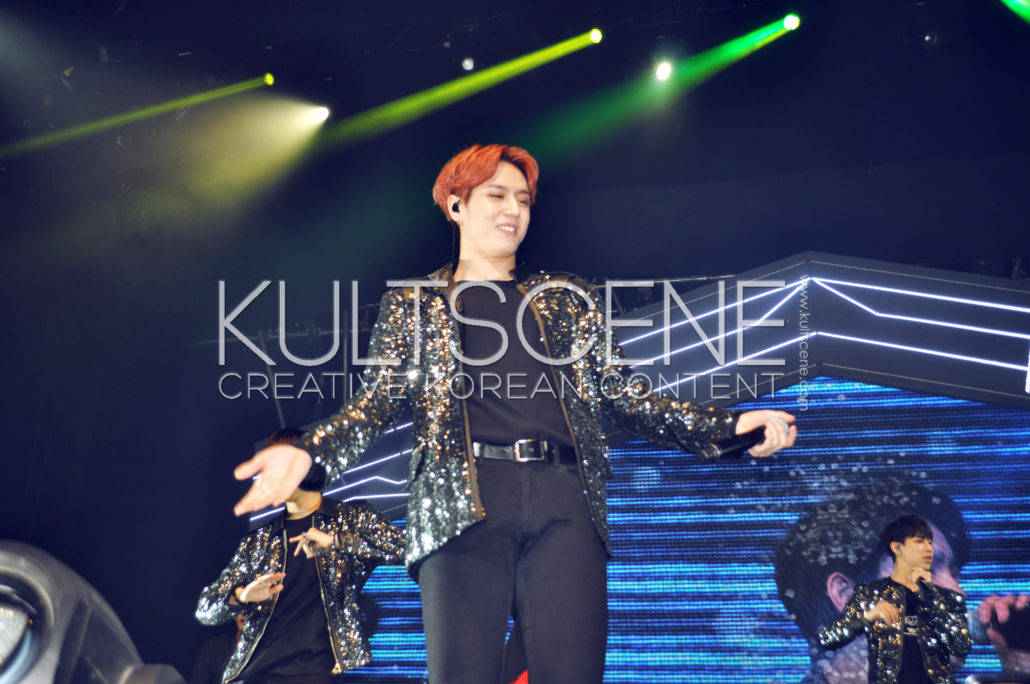 Time and time again fans have assumed that despite his shyness, Mark will come through when it comes to speak English. And as seen in their ASC appearances, KCON LA fan engagement, and countless other instances, this is never the case. Even if Mark is the English native speaking member, he heavily relies on Jackson and Bam Bam. That’s why it was amazing to see him take the lead during the LA shows, probably because his friends and family were in the audience. Mark talked to the audience a lot, he MC-ed the interlude where all the members solo dance, etc. His interactions weren’t as smooth as Bam Bam and Jackson’s perhaps, but the audience could tell Mark felt comfortable and was pushing through the awkwardness for the sake of it all. 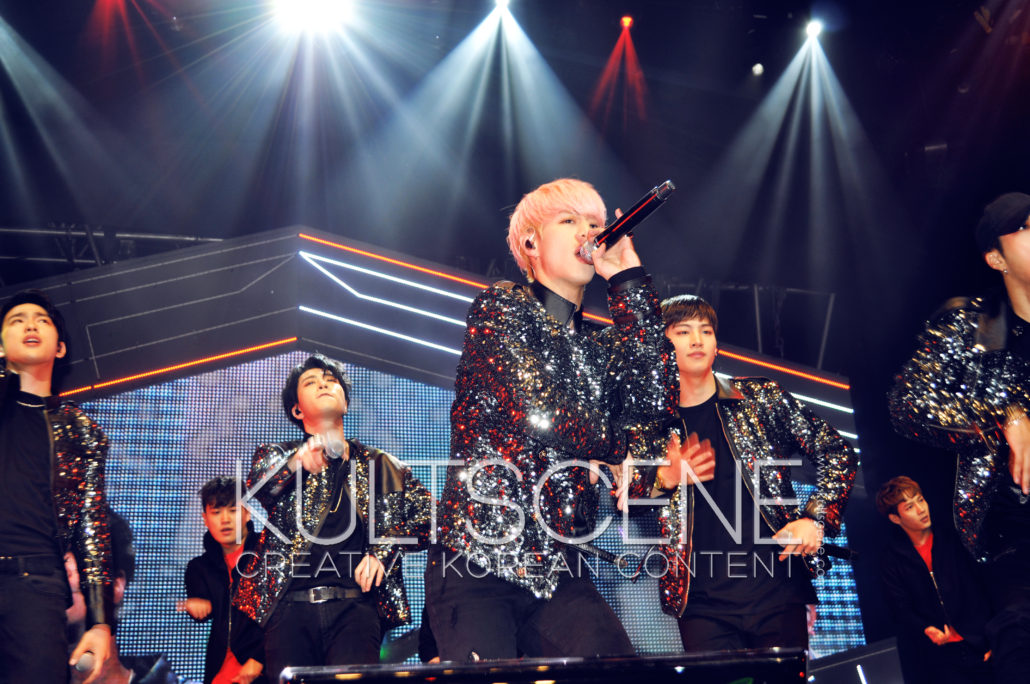 10. Bam Bam Is Never Not On Social Media

By the time the last show in their tour rolled in, Bam Bam was out of dabs. He maybe busted the move a couple of times throughout the show, but he definitely was out of dabs by this time. However, he did roll out his repertoire of memes. Bam Bam flicked a water bottle, brought back the whip and nae nae, and even said “Damn Daniel” a few times. 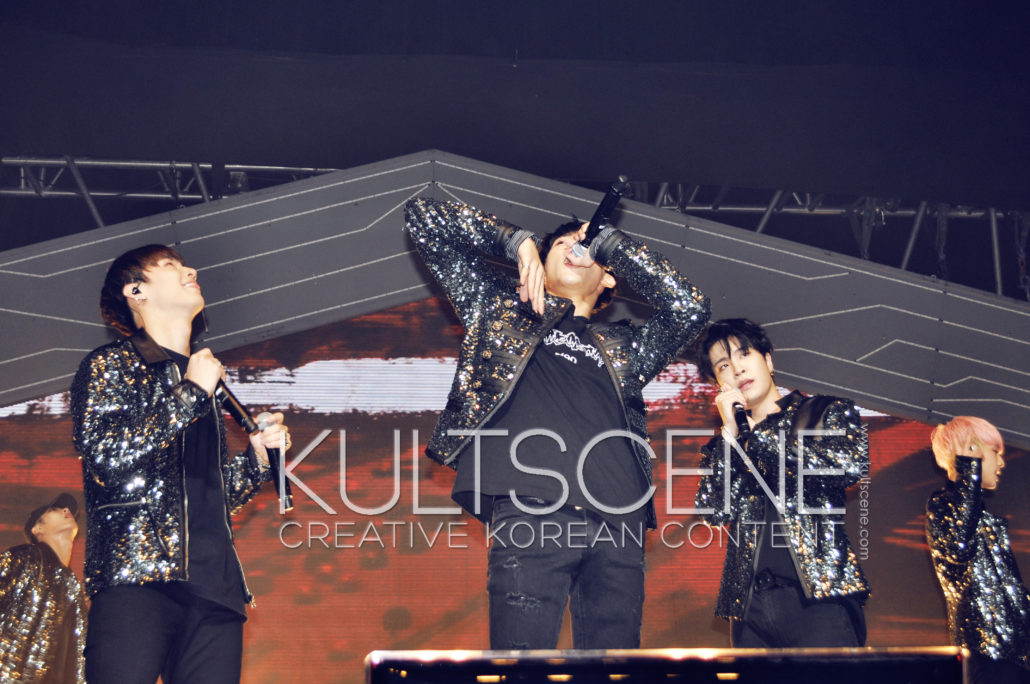 11. We Can Confirm Junior Is Perfect, Bye.

From his looks, to his facial expressions, and down to his singing… Yup, he’s perfect. That’s all.

12. They’re The Most Engaging K-Pop Group Out There

Maybe it’s because most groups don’t have any let alone three members who can effectively communicate in English, but the interaction with fans is practically unprecedented in K-pop. GOT7 spent time speaking with individual fans and put fans on the spot (i.e, that guy Josh who Bam Bam called his baby) and even went back and forth with them during the speaking interludes. For a couple of hours, fans got a glimpse at what K-pop concerts in Korea are, where the artists can communicate effectively with fans. Because even if the rest of the members aren’t fluent, Yugyeom and Junior, specifically, tried their best to speak English. If anything, the “Fly in USA” tour proved that GOT7 can become a favorite on this side of the Pacific because they have the ability to remove the language barrier between idols and the fans fans.

13. Despite Fatigue, GOT7 Left Their Souls On Stage

As mentioned previously, on the closing night of their “Fly in USA” tour, the members were battling injuries, sickness, and tiredness. Because even if they were only in America for two weeks, GOT7 had been touring for awhile. Some members were visibly out of it or not at their full potential throughout the night, but despite this, they all pulled through and delivered an amazing show. JB did the most with choreography, Mark stepped up his talking, Junior shined with his improved English, Jackson did not disappoint in the body rolls department, Bam Bam had everyone laughing the whole show, Youngjae showered us with his adorable smile and laugh, and Yugyeom was the cutest he’s ever been. GOT7’s second show in Los Angeles established that they’re real entertainers and artists who are in it for the long run. And judging by the fact that all their shows were sold out, we can safely say fans are here for it. 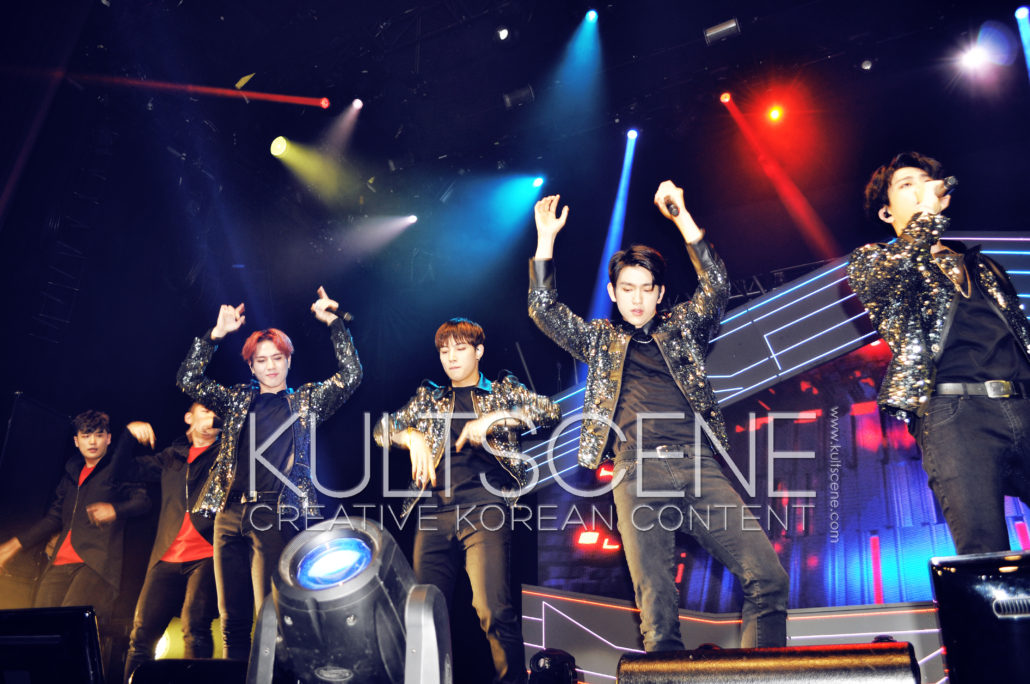