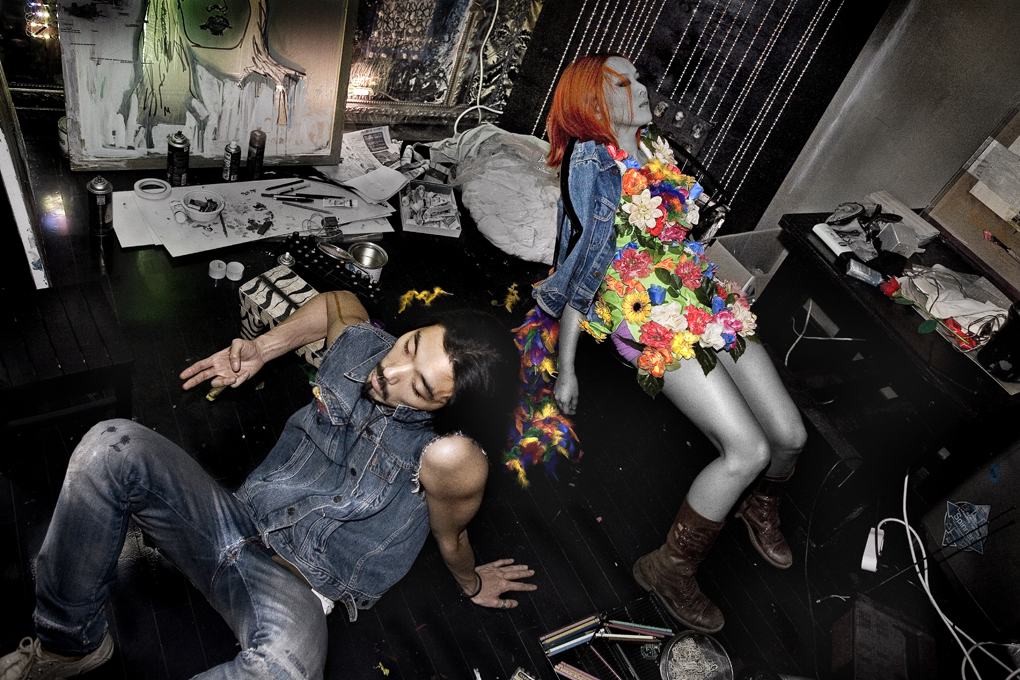 Take every genre of music that you love, a few that you can’t stand, over-the-top theater productions, and half of what you’ll find in every post-modern art exhibit, and you may stumble upon South Korean performance-musician duo EE. EE, comprised of married couple Lee Hyun Joon (Big E) and Lee Yun Joung (Little E,) recently featured on MFBTY’s comeback song Buckubucku alongside BTS’s Rap Monster, and are getting ready for their shows at 2015 SXSW.

Little E took a few moments to tell KultScene about the duo’s plans for the future.

Can you please introduce yourselves to KultScene’s readers?

“We’re EE from Korea! We call ourselves a “total art performance group.” It sounds really big and fancy, but it just means that we like to mix many different things together like art, music, visuals, and fashion to make really cool and unique performances.

What does “EE” mean?

Lee is our family name, the letter “E” is easy to say, and it can also be used in lots of different words. That’s why we chose the name EE.

Big E and I are married. So we have many conversations every day about our lives and contemporary issues. We talk about these things, scribble and draw about them, and write about them. Then we take our ideas and make them into sounds, videos, art exhibitions, and performances.

We’re mainly influenced by older artists like Joy Division, David Bowie, Jean-Michel Basquiat, and others. Sometimes I’m influenced by art exhibitions and sometimes by my baby too.

The two of you are married. Does that ever make it difficult to work together?

What was your reaction when you found out you’ll be performing at SXSW?

We jumped in the air and chest bumped each other! We were obviously very happy about the news.

EE previously performed in the US at Coachella in 2011, becoming the only Korean band to ever play at the festival. What was it like performing for an overseas crowd that maybe wasn’t so familiar with your style?

Coachella was a really cool experience. We played early in the day, and as you said not many people were familiar with our music. But when we began our set, people started literally running over to watch us. I saw them from the stage and I was thrilled by their actions.

What do you expect from the audience at SXSW?

We always do whatever we want and never think about how people will react to things. But we’re hoping the crowd at SXSW will come in with an open mind and will want to play and have fun with us. We want to get crazy together with everyone!

You just released “Wiggy Dawn.” Can you tell us a little bit about the song?

“Wiggy Dawn” is about Korean working moms’ escape into the dawn of the modern world. Korean moms often feel “locked up” by Confucian ideology, their duties as mothers, and stress from work. A mom has to be Superwoman. This is my story too. “Wiggy Dawn” is from our new EP, “Dear Door.” I think doors always represent the ability to go to another place or to escape.

“Dear Door” came out on March 13 and we released the music video for “Wiggy Dawn” that same day. Please check the EP and music video out!

Can you suggest a few songs for new fans of EE to listen to?

“Curiosity Kills,” “Gaweebaweevo,” “Banging Till I Die,” and “High Collar.”

Big E is going to have an exhibition at the Venice Biennale. I’m working with my first band, Pippi Band, again to make something for our 20th anniversary. Also we have plans for more overseas gigs for EE. And since we have a new EP out, we’re thinking about maybe doing some performances in a museum in Korea.

Is there anything else you’d like to let fans know about EE?

Many things in the world fit nicely inside in a box. But EE exists outside of that box. If you want to experience something that’s different, weird, and fun come find us! You’ll be happy you did.”

Check out the music video for “Wiggy Dawn,” and then watch it again while you try to figure out what is going on.