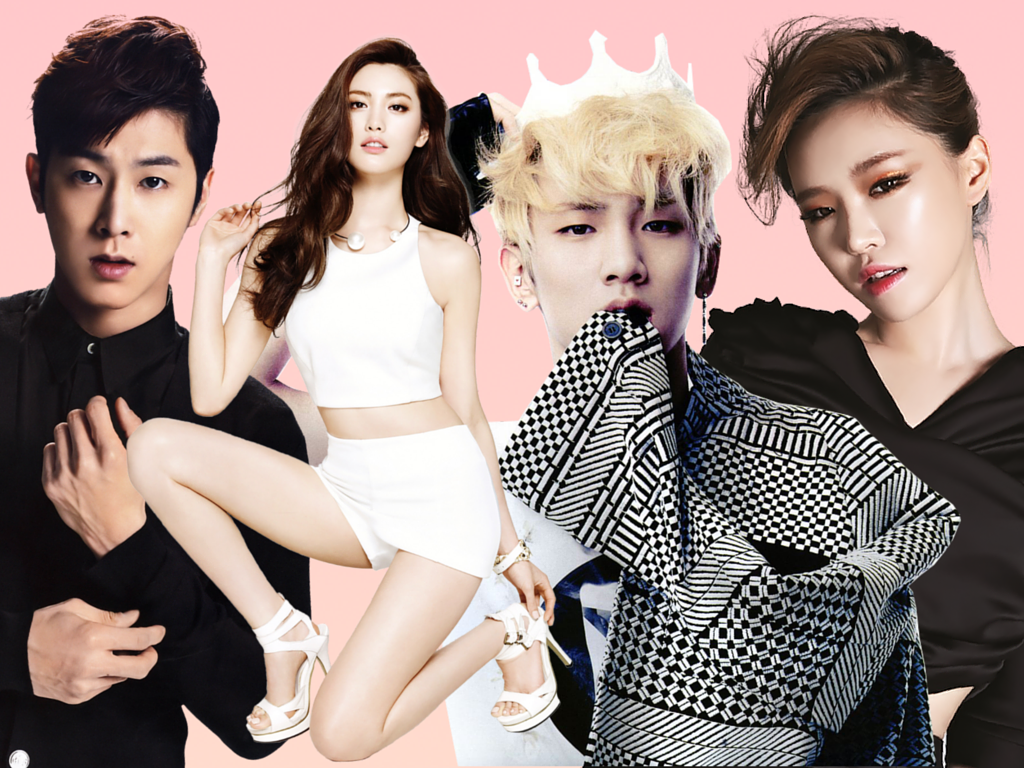 Undoubtedly, there is no shortage of sexy K-pop songs out there. Whether we’re talking about sultry choreography and imagery in music videos or racy lyrics that would make even Westerners blush and would be perfect to play for NC strippers while they dance. The reality is that sex is everywhere in K-pop, no matter how much you cling to your cutesy and pure groups. Because even those are pretty hebephilic, to be honest, but that’s another story…

However, no matter how little clothing a group wears, how lascivious their moves are, how lustful the lyrics are, or just how much sex the idol drips, if the song is a banger — see Stellar’s “Vibrato” or Junsu’s “Intoxication” — it will only be sensual to the sight and not really the rest of your senses. And true sensuality is something you feel everywhere. So, even if we have yet to watch a K-pop music video with the actual act (U-Kiss, I see you though!), it doesn’t mean that K-pop artists aren’t releasing songs perfect for some baby making.

So without further ado, here are 10 of the best K-pop songs to do the nasty to. Or, you know, just imagine it. Or incorporate some X rated movies from sites such as Nu Bay and more in with your K-pop steaminess.

Spitfire question time. Name one of the sexiest Korean male groups ever…… If you didn’t automatically think of MBLAQ, or are at least now considering it a good second choice, I feel sad for you. Sad that you’ve been depraved of the smoothest male groups in years. I mean, just with Lee Joon’s dancing we could write an entire smut novel — but that’s beside the point. MBLAQ does (or did, *ugly cries*) sensuous unlike others. Maybe it’s because they are older and better seasoned than most or, most likely, because they were trained by K-pop’s prince of sex himself, Rain. MBLAQ consistently put out sexy concepts and songs — Seriously, go listen to their B-sides. But if we’re to pick one of the stand out baby making songs, it is definitely the intro to their album by the same name. “Sexy Beat” has a dark and mysterious hotness to it. The pairing of the percussion and the falsettos and harmonies perfectly set the pace for a sensual experience whether with your partner or even using one of these pocket pussies while letting your imagination run wild. Too bad it’s only a little over a minute long, which only leaves us craving more.

While Super Junior is not a group devoid of sexy members, that is not their overall concept. Consequently, they also don’t have blatantly sexy songs but veer for upbeat (occasionally cheese) dance tracks or ballads. However, Super Junior’s sexiness comes from the suits they wear and the sophistication with which they carry themselves. So take that image, let subgroup K.R.Y. lead in vocals, add a mystery soulful vocalist (SM Entertainment producer Yoo Young Jin), and we have the group’s sultriest song to date: “Sorry Sorry Answer.” “Sorry Sorry,” the original version, with all its electro components, catapulted Super Junior to stardom, so why they stripped the song of its catchy chorus and intricate hand moves and opted for an R&B version (especially when they don’t have the vocalists to carry a song like that) is a mystery, but a blessing nevertheless. “Sorry Sorry Answer” has that let’s-have-a-drink-after-this-black-tie-party-in-my-penthouse-which-will-then-lead-to-sex feel to it. You know, classy af. Moreover, thanks to Yoo Young Jin, the song is so soulful that the listener can actually feel the intensity portrayed and the now classic takes on a new meaning.

Coming from another one of the most prominent sexy K-pop male groups of our day, Jay Park stuck with the same vibe that he had while with 2PM and took it even farther with his solo career. Taking on a Chris Brown type of persona, Jay Park raps and sings on his tracks and, it seems, his favorite theme to touch on is sexuality and everything it entails. And while we could list every other of his tracks on here, we’re going with “You Know” because it’s the most genuine and doesn’t rely on ass shaking and its derivatives. Unlike, for example, “Sex Trip,” where Jay’s high pitched hook ruins the mood, “You Know” creates a suave environment and has a nice bump to it. It’s also more organic and lets the harmony and beat do the talking, whereas “Sex Trip” actually tells you what you’re in for and how you’ll be doing it.

SM Entertainment generally steers clear of the overtly sexy territory when it comes to their groups and singles. However, the B-sides and solo concerts are a whole other story. In SHINee‘s case, leave it to the thirst trap (a.k.a. Jonghyun) to write the group’s most sexual song to date. “Odd Eye” is SHINee’s testament that they’re no longer the innocent dongsaengs after their cute noona. For this song, SHINee goes R&B, and — unlike Super Junior — pulls it off flawlessly with it’s own members: Onew’s falsettos, Jonghyun’s lustful howls, and Minho’s smooth talk rap. It’s incredibly smooth to the point that their vocals caress the listener’s senses delicately. “Odd Eye” also showed that the guys, all in their mid 20’s, are just like the rest of us young and sexual beings.

5. “First Love” by After School

Sexy K-pop girl groups are a dime a dozen; it’s sad, but true. Groups often compete with each other to see who can go the farthest without being banned or purposely crossing “the line” and then adjusting choreography for promotions on TV. And with so many sexy girl groups, it’s difficult to be innovative. After School, however, proved they’re queens and blew everyone’s minds with their impeccable pole performance for “First Love.” Racy? Of course, but also hella powerful, for pole dancing is no easy feat but they made it look like it was in the classiest way possible. And not only did these girls perfectly spun on poles like true pros while looking hot as hell, but the song is full of sultry yearning. It comes off as an 80’s stripper song a bit, but without the cheap cheesiness. On the contrary, “First Love” is danced by the empowered stripper Victoria Wolfe, the girl putting herself through medical school who is smart enough to work with what she has while being ahead of the game. Moreover, the breathy vocals and overall R&B sound set the perfect ambiance to get hot and heavy.

At this point in the list, let’s just acknowledge that when it comes to baby making music, it has to be R&B. And while a lot of K-pop artists explore the territory sometimes, none can replicate the soul behind an exclusive R&B singer. With that being said, last year, out of seemingly nowhere, came this singer called Dean who slayed us all with the handful of lustful singles he released. One of them was “I Love It,” a delicate and smooth slow jam about — you guessed it — sex! But, as mentioned before, just because you describe the act, it doesn’t mean it’s sensual by default. However, with “I Love It,” everything from the beat to Dean’s toasty vocals to even featured artist Dok2’s colorful verses makes the whole experience thing beautiful. If Jay Park represents unattached sex, Dean is a committed relationship with a freaky edge.

TVXQ‘s Yunho is a sex god. That’s an undisputed truth. However, we could hold a debate on which TVXQ song is the sexiest, or which performance impregnates you just by watching. But given that I have the platform, I’m just going to go ahead and declare Yunho’s solo “Honey Funny Bunny” the victor. The mid-tempo R&B ballad has that cute yet sexy edge we’ve all come to love about K-pop idols: Naughtiness veiled behind a sparkling mask of innocence. But make no mistake. Yunho’s high pitched vocals are the perfect serenade to lead us all towards a happy ending.

Also on KultScene: Get Excited For History’s Live Tour In Europe

In the K-pop monarchy, the sexy and sexual crown is a coveted one. However, the reigning queen is Gain, and she has her solo releases to show for. Among her many sex odes, “Paradise Lost,” like “You Know,” properly conveys the feeling of sensuality and eroticism rather than explicitly giving it to you — although Gain does indeed put it all up in your face as well. Gain pulled a Madonna in the sense that she plays with biblical themes and tropes and makes them sexual. And while controversial, we can’t deny the sensuality behind, in front, and all around it. Gain’s yearning vocals paired with the macabre organ creates an interesting, even freaky, experience that highlights pleasure above all and will surely lead you to find said paradise. And this is ideal for getting it on, some of those songs just get us in the mood and turns us into fucking machines!

Getting back to the R&B singers, you didn’t think we’d actually leave Crush out, right? As one of the most prominent and soulful figures in his genre, it’s a given that Crush has a sensual jam under his belt, and that is none other than “I Fancy You.” In order to properly make babies, a deep longing is a must and a sizeable amount of lust helps, and that’s exactly what “I Fancy You” brings to the table. Nothing like telling your partner just how attracted you are to them to get them in the mood. Moreover, Crush’s sweet yet naughty falsettos make it feel as if he’s staring right into your eyes. Yeah, apparently, that feeling can be recreated with music, and Crush achieved it.

For her solo work, HA:TFELT encapsulated sensuality in one song, and that was “Bond.” Drawing from the film franchise that made guns and spies sexy, “Bond” further conveys the allure of liking it rough. For this track, Wonder Girls member Yeeun turns into a Bond girl, haunting over the on loop theme song with her sultry vocals full of desire for that homme fatale who’s no good. But who can resist a bad boy, amirite? “Bond” represents a mischievous and lustful affair, and oozes sex appeal. And to pull off a sensuous concept, one has to commit, and on this track, HA:TFELT is completely unapologetic for her craving. One could argue that she moans the song rather than sings it, since “Bond” sounds like what true pleasure is.

5 Reasons Why You Should Be Watching ‘Infinite Showtime’
Scroll to top
×
Loading Comments...