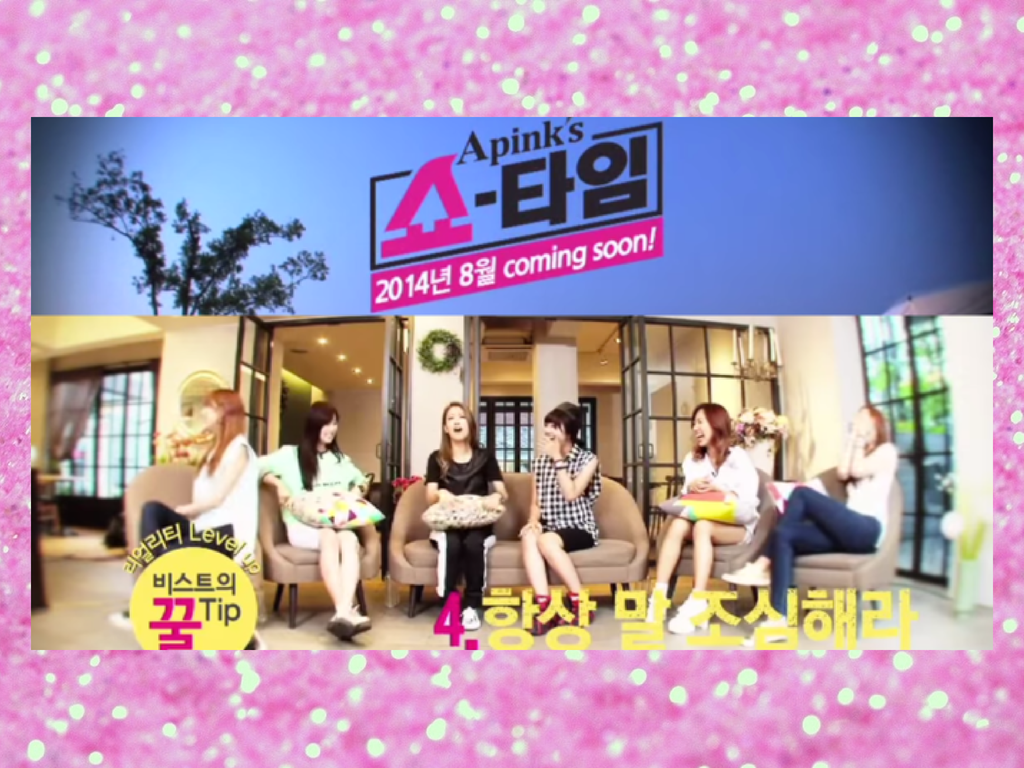 With BEAST concluding their season of Showtime this past Thursday, it’s time to look forward to season three.

But before I begin, I just want to say that Burning the Beast is my favorite season of Showtime so far. I know EXO was the only other group who has been on the program, but BEAST’s ease in front of the camera and with each other made each episode funny and enjoyable to watch.

With the end of season two with Beast, we look ahead to what season three has in store. For starters, Showtime is changing things up by adding a girl group to the show. And it’s not just any girl group, but A Pink! In all honesty, I only really know A Pink for their acting and variety show appearances. By those alone I will definitely tune in to watch the ladies on A Pink’s Showtime.

The only members I have seen on variety shows and dramas are Eunji, Naeun, and Bomi. From Eunji’s characters in Reply 1997 and Trot Lovers, we can definitely expect her to be a sassy edition to Showtime and not afraid to share or show anything. Eunji is extremely outgoing and knows how to entertain.

I only saw Naeun on We Got Married with SHINee’s Taemin. But throughout their season, I found myself watching WGM more for Naeun than Taemin (Taemin was the reason I started watching that season). She was always laughing and smiling and didn’t mind laughing at herself.

I also saw her on a recent episode of Running Man (July 6th) with fellow A Pink member Bomi. She had a few witty comments, which I admire, and held her own with her partner Jong Kook. Naeun may not be as boisterous as Eunji, but she will definitely be able to showcase her personality on Showtime and I can’t wait to see her thrive.

The final A Pink member that I have seen on a variety show is Bomi, who was also on Running Man. Bomi really caught my attention when she and her partner, Baek Sung Hyun, had to move silkworms from one basket to another one. Bomi was taken aback by the silkworms and let out some hoarse noises that the Running Man members didn’t fail to talk about. She didn’t even seem to hear them or care (if she did hear them) what they were saying. But she made me laugh and continued to do so throughout the episode. I can’t wait to see how she is on Showtime.

I think A Pink is the perfect follow-up to BEAST because each member in the group has a strong and memorable personality, and they will definitely make each episode eventful. I’m excited to learn more about the other members and become a bigger fan of A Pink.

In BEAST’s final episode of Showtime, the guys gave a few pointers to the ladies of A Pink, and from the preview, it doesn’t seem like they need any help:

Although the preview is brief, we can already tell that season three of Showtime will also be a good one, like the previous two. I am sad that Burning the Beast is over, but excited to see what A Pink will bring to the show. A Pink’s Showtime will air in August.

Are you guys excited to see A Pink on Showtime? Let us know what you think in the comment section below. Don’t forget to follow us on Facebook, Twitter, Instagram, Tumblr, and Bloglovin’ so you can keep up with all our posts.