Sunday’s come and gone, and an avid KultScene reader may have realized that we didn’t publish our usual Playlist Sunday list. Don’t worry, we didn’t forget! We were just busy making sure that we covered every single moment at KCON LA 2015 to make sure we let you in on all the details. Instead, the three KultScene writers who covered the event picked our favorite songs of each night’s M! Countdown concert.

On the first night of the show, Super Junior performed a variety of songs from throughout their decade-long career. As a longtime ELF, or Super Junior’s Everlasting Friend, I couldn’t handle myself the minute I realized they were performing “Shake It Up.” The pump up party song is one of Super Junior’s most fun songs (in my opinion) and it seemed like everyone in the Staples Center on August 1 was stomping their feet and clapping along to the members’ antics.

During the second night, the final song of the first set was my particular favorite (barring Shinhwa, because let’s be honest, Shinhwa is a legend). When the opening chords of Red Velvet’s “Happiness” began, it seemed like everyone immediately began singing and dancing along. The song’s popularity and the relatively easy dance moves reminded me of a lot of circa 2009 K-pop songs, which thrived on their iconic dances, like Girls’ Generation’s “Gee,” Super Junior’s “Sorry Sorry,” and Wonder Girls’ “Tell Me.” As the opening act for the second night of “M! COUNTDOWN Feelz In LA,” Red Velvet got everyone moving and that’s nothing more than I could ask for. — Tamar

As mentioned in our KCON 2015 in Los Angeles recap, on the first night of the concert, sapphire blue lights illuminated the Staples Center to welcome K-pop kings Super Junior. And since L.A., and overall America, craves the Super Show, Suju treated attendees to a medley of some of their most fun songs. But one of the most random if not mind boggling track choices was Donghae and Eunhyuk’s latest release “Can You Feel It.” Even if it was a quick snippet, the song was completely unexpected but completely appreciated, given that we got to see ALL of the guys derping around doing the choreography. Seeing this performance, along with the rest on the medley, only made us crave a Super Show even more and proved that audiences receive even their less known songs well.

As an ELF, Saturday completely drained me of everything inside of me. Sunday was going to be a night for me to sit back, chill, and watch performances by groups I wasn’t heavily invested in. Sure, I liked some Block B songs, but I didn’t consider myself a big fan… that is until their sub-unit BASTARZ came out and performed “Zero for Conduct.” P.O, B-Bomb, and U-Kwon, literally, gave me life and got me lit as soon as the opening siren came out the speakers. I was dancing and completely vibing throughout the whole performance even though I didn’t know the lyrics of the song. And that, ladies and gentlemen, is by definition how you put on a great show.

Although the lively Jackson wasn’t in attendance at KCON LA with his group, GOT7 made sure to still put on a dynamic show for the crowd! The anticipation was already high since all the iGOT7’s (GOT7’s fan club name) knew the guys were going to sing “Just Right,” their newest single. But GOT7 took it to another level when they performed “Bounce,” which was the debut track for members JB and JR when they were JJ Project. “Bounce” is always such an enjoyable performance to watch, with all the crazy head bobbing, infectious frolicking as they run wild around the stage, and, of course, the cute “shake it shake it for me” butt shakes. What started as a two-person song and performance has now evolved into a song that the entire group can genuinely enjoy performing together!

Going into Sunday’s night’s concert, I already knew I would’ve been content with whatever setlist SHINHWA played. A part of me expected 80 percent of their set to be songs off of “The Return,” “The Classic,” and “WE,” considering these albums were all released within the last three years, with of course an addition of the song that brought them to their stardom, “T.O.P”. My predictions for their set was rather on par, but what blew my Changjo (SHINHWA’s fan club name) mind was when “Hey, Come On!” started playing. The crowd was already hyped and the energy was already through the roof, so can you imagine what it was like when the beat dropped for this song? The choreography for the songs they performed prior to this were all relatively mellow and synchronized versus the constant jumping and arm waving choreography for “Hey, Come On!” These legendary idols couldn’t have put together a better set list! Let’s just say the Changjo in me sobbed happy tears that night. — Tam

I have never been a devoted fan to BLOCK B  but I have always liked them due to their aesthetics and their funny, big personalities. After seeing them perform live at KCON LA 2015, I  become a hardcore fan of the group. As soon as they began to perform “Very Good,” I went crazy. I started dancing and singing like crazy along with BLOCK B. Seeing them do all of their funny gimmicks and the unforgettable choreography of the song while commanding the huge stage at the Staples Center was a blast to my eyes and ears. The energy of the night got pumped up by BLOCK B making it a night and performance that I will never forget. 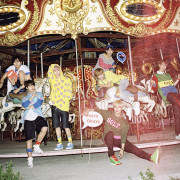 ‘Hello, I Love You’ Is (Probably) The First Novel About Romancing...
Scroll to top
×
Loading Comments...