Tag Archive for: what is love 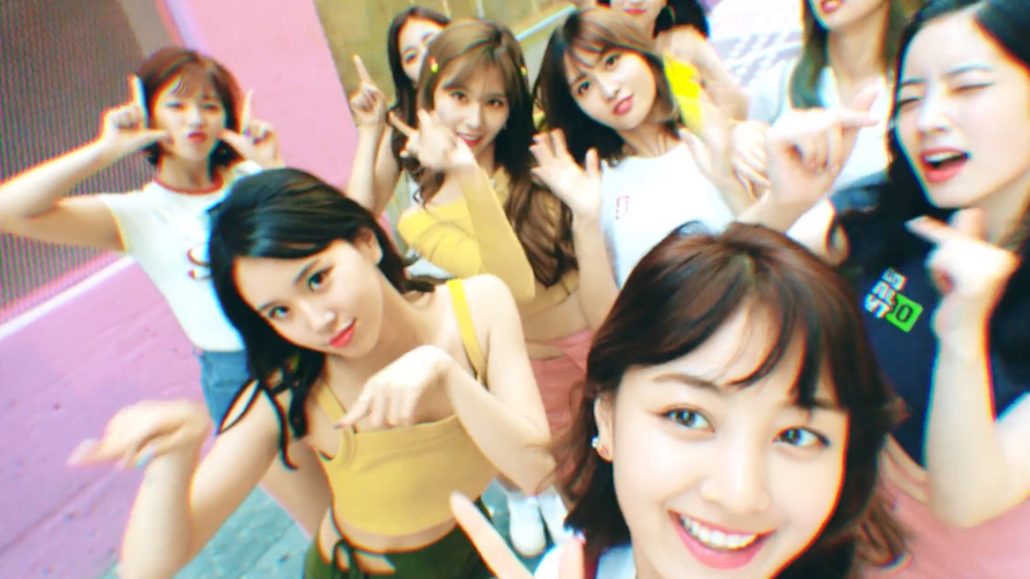 As they grow into their role as the defining girl group of the generation, Twice have begun to come to terms with their identity. Similar to Girls’ Generation before them, they don’t really need an identity to succeed. They represent the ideal; young women who go through all the same trials as anyone, yet do it with the veil of perfection. Twice, however, are not resting on the simplicity of being the best. Through their music videos and dances they are creating their own personal world. A world in which a group of young women dress up as their favourite movie stars, make up their own cheesy dances, and constantly drop private jokes.

Right from their debut, “Like Ooh-Aah,” Twice were borrowing from popular culture. It was a zombie story where the girls played the typical high-school archetypes: cheerleader, sporty, bad girl. From its follow ups though, they positioned themselves as not only star but viewer too.

In typical K-pop fashion, the videos for “Cheer Up” and “TT” have a litany of references, but many of them are kept general. It makes more sense in this context compared to some later work given the speed at which the scenes are cut together. In “Cheer Up,” it goes from a clear Scream callback to a fairly generic high school movie to a Sailor Moon-type scene in seconds. Each member has their own particular scene, but other members always participate in that scene with her. As well as the lack of specificity, there’s a constant connectivity that makes it much easier for the viewers to grasp the many ideas being thrown at them.

“TT” has a similar style. It’s halloween theme is filled with pirates, witches, superheroes, and fairies. Each has an obvious touchstone, but not all are clear references. It has one particular, innocuous moment that changes and defines their approach from then on though. It comes right after the first chorus and is not visual but a lyric. Jeongyeon sings “Doesn’t cheer me up at all baby.” It’s an admission of self-awareness. The Twice of “Cheer Up” are the same Twice of “TT,” and so on. They are not reinventing themselves each comeback but growing as a group of young women together.

Even when not connected directly like the “Cheer Up” lyric in “TT,” they still create memes as a way of communicating. The antennae of “Signal,” the knocking in “Knock Knock,” and the Ls in “Likey” all tell the story of their respective songs but add to the growing dimension of the Twice universe. Memes have become a primary source of communication on the internet, and Twice are clearly attuned to that. What’s different from how Twice uses these gimmicks compared to how other groups created viral dances is how they integrated them into their whole career. A viral dance usually happens for one song and is specific to that song. A meme, on the other hand, becomes a part of your language, drifting into other areas of your life regardless of if you wanted it to or not.

Also on KultScene: THE STORY OF LOONA: ODD EYE CIRCLE

This is no more evident than in the choreography for “Likey.” The entire concept of “Likey” is self-reflexive. The choreography is constantly framing the girls in solos or duos, they reference almost all of their previous songs, and the videos features them filming each other and dancing alongside formations as if they were just fans. “Likey “ is a song about social media anxiety barely hidden beneath a more straightforward love song. It’s about what constantly being online does to your real life self esteem. The allusions to a relationship in the lyrics are pretty scant and could easily be replaced with no issue. Twice are singing about themselves. Problems of looking at yourself and being looked at. Problems that connects us as an audience to idols like them.

Instead of filming each other in “What is Love?” Twice are watching themselves on TV. They observe alternate versions of themselves play scenes from famous movies, the dance to Chuck Berry in Pulp Fiction, Mathilda dressing up in Leon, and best of all Dahyun in her own contact lens commercial. After two years of building their world, Twice are now comfortable enough with their identity to have much more concrete references. “What is Love?” is less a video of spotting films you know and feeling good about it but watching people you know act out these (mostly) iconic scenes. It’s even shot like a more focused version of “Cheer Up.” The transitions are similar and both give time to individual close ups for a big reaction.

Twice’s use of callbacks and pop culture references uniquely situate them within a changing landscape of girl groups. Formally girl groups are becoming more diverse. Gone is the apparent hegemony of cute concepts, now one can look through the groups of today and find just about anything. Conceptually too there are changes going on. Similar to Twice, LOONA are creating something of a world for themselves just on a much larger scale. Yet no group has quite found how to capture the imagination of so many like Twice have. They create works that reflect their intimate day to day problems while at the same being the ideal person that makes them feel self-conscious. It’s a complex series of emotions communicated with ease through modern means. It’s easy to dismiss as vapid or childish but at its core it’s personal — almost casual— but so necessary.