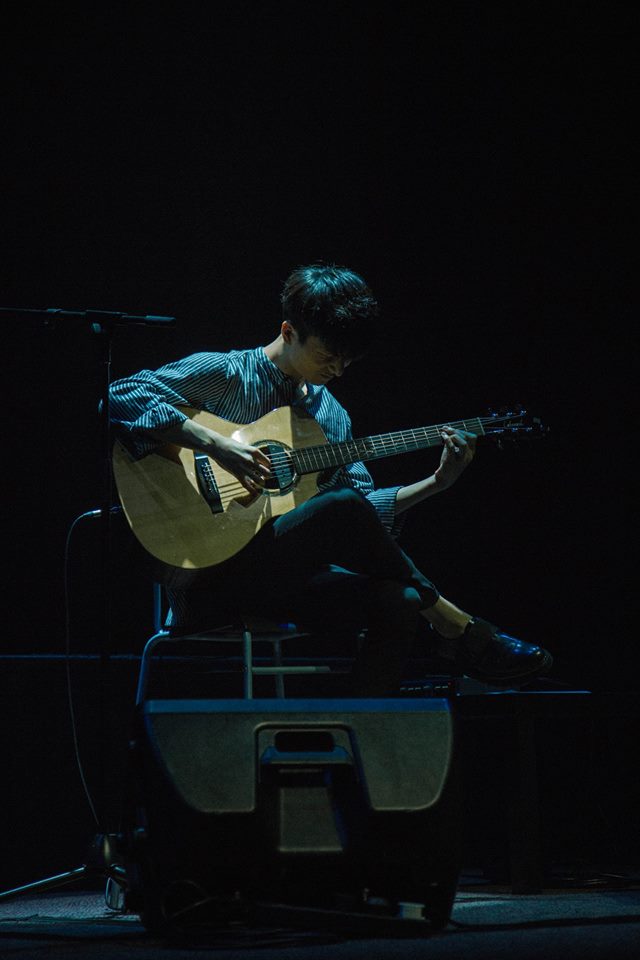 Held on July 22, popular guitarist and Youtuber Sungha Jung made his return to Singapore for the seventh year running, this time with his newest album, Mixtape. Unlike his usual previous ones, this was his first full album filled with his all-time favourite covers. Ranging from romantic tunes to classic pop, Sungha gave this diverse mix a unique spin, trying styles “which he had never tried before”.

Sungha opened the night at Kallang Theatre with “On Cloud Nine,” an upbeat and cheery song from his previous album, L’Atelier. The guitarist, clad in his trademark striped gray shirt and black pants, started strong right off the bat, displaying his outstanding guitar and percussion skills. He followed this by introducing himself and his latest album in fluent English, before proceeding to perform two of his favourite tracks from the album, “Close To You” by The Carpenters and “Sunny” by German vocal group Boney M. He maintained a chill and relaxed beat throughout “Close To You,” and as would be the trend for the rest of the night, he finished the song quietly and sweetly, allowing the sound of his guitar reverberate through the entire theatre.

“Sunny” was a track that Sungha said he had a lot of fun arranging, especially because the song was released about 20 years before Sungha was born. That fun was evident in his performance, with the fancy runs his fingers continuously made up and down the guitar fretboard. His effective use of short, anticipatory pauses throughout the song made it much more enjoyable to listen to and watch.

Slowing things down, Sungha performed Eric Clapton’s “Tears In Heaven,” also from his latest album. He did so in a gentle and comforting way, not unlike the original, but his jazzy modifications were scattered throughout the song, varying the repetitive verses and choruses with his creative adlibs in both the high and low registers. He next performed an obvious fan favourite, judging by the explosive response he received from the Singaporean audience once he announced it. A Goblin medley consisting of the hit K-drama’s two most popular OSTs, “Stay With Me” (by Chanyeol & Punch) started off in a more cheeky fashion, but Sungha gradually toned it down as he made the smooth transition into “Beautiful” (by Crush). In particular, the complex chords and emotions of the ballad seemed even more fleshed out through his playing, especially as it intensified towards the end of the piece.

While there was a bit of a tonal whiplash, Sungha returned quickly to his upbeat pieces with “Catching The Beat,” a rhythmic track from L’Atelier. While he had created the song using an acoustic guitar, he played it at the concert using a classical one, but this did not hinder his performance in any way as he once again showcased his fast fingerwork and remarkable sense of rhythm. As he ended off the first half of the concert, Sungha performed his arrangement of a, what he called, beautiful Singapore song that he had ran into. “Encounter,” by local singer Stefanie Sun, was a familiar song that the crowd responded heartily too, and his tender version of the piece, along with the way he skillfully managed his volume variation, truly melted the hearts of the audience.

Returning to the stage in a blue striped shirt, Sungha started the second half of the concert with “Isn’t She Lovely” by Stevie Wonder, another track off his latest album. The lively performance was groovy and ended off with a bang, which was a great way to get back into the concert. He continued with Jesse Harris’ “Don’t Know Why,” which was another of his favourites from the album. It was one of the more serene pieces of the night, filled with unusual chords that somehow sounded natural when played by him. The outro of the song in particular, while it was repeated three times at the end, managed to sound different each time, thanks to the subtle changes made to the chord progressions he used.

Taking a short break from his string of covers, Sungha performed “L’Atelier,” the soothing title track from his previous album. As he explained the meaning of the word (French for studio) and his own workshop’s significance to him, he started playing the song, which had a wonderful waltz rhythm that is not usually seen in his other compositions. The performance was dreamy and mellow, and by its end, it felt like there was so much left unsaid, which was bittersweet yet slightly wistful. The liveliness returned with “Englishman In New York” by Sting. This piece felt like a direct contrast from the previous two songs, with its heavier nature and extremely catchy beat. The anticipatory and dramatic pause also made its comeback in this piece, and was used wisely right before the outro.

Also on Kultscene: 5 Tracks To Get You Ready for Sungha Jung’s L’Atelier Concert

The only piece of the night which was not a recent composition or arrangement of his, “The Milky Way” from his 2014 album Monologue, was a memorable performance because of the journey Sungha took the audience on. With his eyes closed as he played, he was truly absorbed in the piece, and his effortless technique allowed the audience to go an exploration with him. The piece conveyed a certain wide-eyed wonder and optimism that was both refreshing and moving, particularly when he started to move up to the higher registers. Sungha followed this with yet another fan favourite, especially for the “Singaporean crowd that loves K-dramas,” as he described them. He performed “Everytime” (by Chen and Punch) from Descendents of the Sun, which started out very gently. With a four-beat transition, the piece evolved into something which was much more rhythmic but still melodious, which created an infectious energy that made the piece so much more charming. 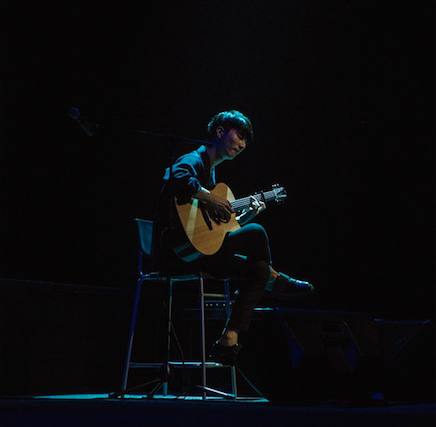 For his (not-so) last song of the night, Sungha performed “Seventh #9,” named after the chord type this piece heavily featured. Full of technicalities and almost discordant sounding chords, the performance was flashy and reminded the audience once again, that Sungha was a guitar genius. After a few album giveaways and playful final comments, Sungha performed a local song that was dear to the hearts of many Singaporeans as a timely encore. Once he started “Home,” written by Dick Lee, fans started to sing along to his playing, creating a heartwarming and comforting scene in the theater. Unlike the other pieces he had showcased throughout the concert, this final piece was simpler but the sincere way he played it made it all the more exuberant and beautiful. It was the perfect way to end the concert.

Once again, Sungha Jung delivered remarkably through MIXTAPE, and while there were minor tonal inconsistencies throughout, his repertoire was amazing and showcased his talents as a guitarist.