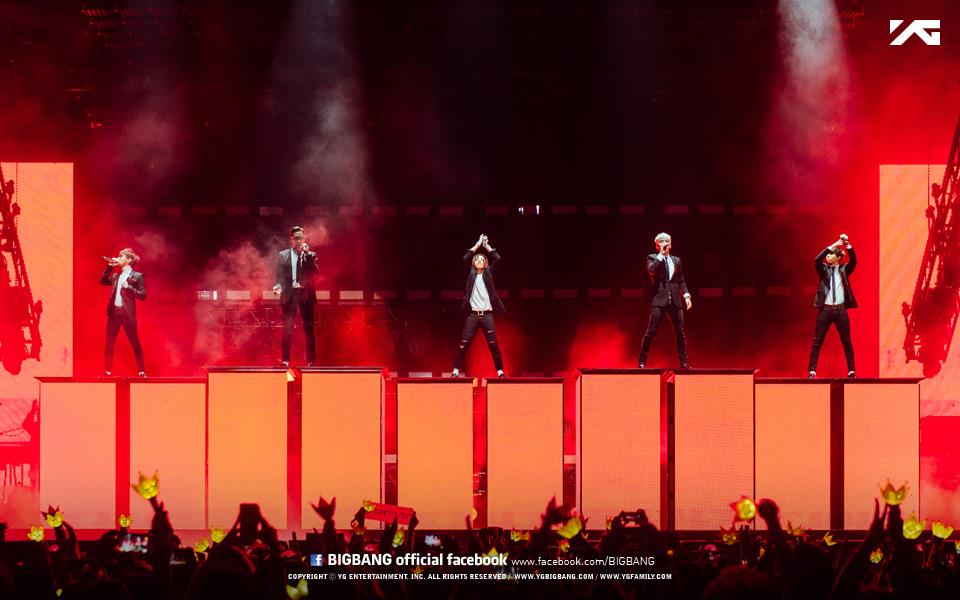 I still remember sitting in the passenger seat of a friend’s car while on winter break from our sophomore year of college, catching up on the past semester when a song began to play through the speakers. The song was unfamiliar, yet refreshing, and even though it was in a foreign language that I did not understand, I found myself nodding along. The hook was quickly etched into my brain and even hours later still had “I’m so sorry, but I love you” repeating in my head- BIGBANG’s “Lies.” Fast forward to November 2012, I was finally going to see BIGBANG, the band that plunged me into the world of K-pop live in concert, and the show was everything that I thought it would be. The show gave me such a concert high that I thought nothing could beat the feeling of pure joy. After a while there was a sinking feeling that it was pretty unlikely that I would get to see BIGBANG in concert again. That was until they began releasing singles from their “MADE” series. Soon after the last single was released, a world tour was announced and my heart began to race.

Back after three years, BIGBANG made their way through North America on their MADE Tour. Like in 2012, they performed for two nights at New Jersey’s Prudential Center. I was lucky enough to snag tickets to the sold out first night, Oct. 10. Selling out a venue always brings me pride as a fan, like bragging rights, having a “yeah, we did that” sort of feeling. People began lining up as early as 12pm the day before the show, braving the cold night and a quick rain storm all to ensure the best spot to see the idols. Crowds gathered outside of the Prudential Center hours before the show where a flash mob performed, fans could purchase tour goods, and a DJ blasted music that fans could dance to until doors opened. It was obvious that I was not the only one excited for BIGBANG’s return to the tri-state area.

As the lights dimmed, the arena erupted into screams and cheers as BIGBANG appeared on stage. The concert opened with the high energy song “Bang Bang Bang,” which brought literal bangs in the form of fireworks bursting at the climax of the song.

Although I love the excitement of dancing around with other fans, the loud music, and the flashing lights, some of my favorite parts of the night were when BIGBANG slowed down with some of their more mellow songs. So it’s no surprise that the slow version of “Haru Haru,” which fans sung along to, still remains one of my favorite parts of the show. Even back in 2012 when I first heard this version live, there was something magical about clearly hearing the audience singing along to every single word. It created a sense of unity with the band and the audience, and I feel it’s one of the best ways to show appreciation for an artist.

Fan interactions are also on the top of the list of enjoyable parts of a live concert, and BIGBANG didn’t disappoint. The boys took a short break to introduce themselves and interact with the audience, each member showing a bit of his personality. They all seemed to be more comfortable conversing in English than their last concert and the extra dialog was greatly appreciated by the fans.

Seungri asked where everyone was from inciting screams from the crowd every time he listed a random city. Daesung talked about how he could not see the audience because his hair was covering his eyes. He asked the audience if they wanted to see his eyes, to which he swept his bangs back and made silly, border-line creepy, faces into the camera. Moving right along, G-Dragon asked the audience to sing with him, and began the chorus of “Bad Boy” and the audience quickly chimed in to sing along with him and they went straight into the song “Bad Boy.” BIGBANG continued the mellow atmosphere with “If You” and then quietly left the stage for a few moments.

The solo performances were up next, where each member showcased their own styles. Between each performance were short videos featuring each member, carrying a Hollywood blockbuster style cinematography theme throughout the show. The video clips ended and Daesung appeared on stage behind a drum set, banging away fiercely, another thing he can add to his list of talents. As he continued to play, the rest of the group joined him on stage and went straight into “Sober” with Daesung remaining behind the drums playing along. They continued onto sing “Bae Bae” and then announced that the next song will be their last, before beginning the song “Fantastic Baby.” Again everyone was out of their seats jumping and dancing along with the band that the floors of the arena shook. BIGBANG left the stage to cheers and returned quickly for an encore performance where they sang “We Like to Party.”

The band remained on stage after the show to thank all their fans for coming and making the show enjoyable for them. After a bit of goofy-ness from Daesung and Taeyang. Que a strategically placed impromptu Michael Jackson-esque dance. And let’s not forget the mini heart parade from all of the members as they said their goodbyes.

BIGBANG truly lived up to their reputation of putting on an exciting well produced show. And now that the concerts are over and the post-concert depression sets in, let’s hope that they will return soon.