This is a bit of a loaded question – JYP Entertainment has been one of the three most prominent entertainment companies in the K-Pop industry for years, and it’s still treated as such. However, nowadays, the main competition is between YG Entertainment and SM Entertainment, and it’s worth looking at why exactly this is the case.

Park Jin Young, JYP himself, was one of Korea’s most popular singers in the early and mid-1990’s. In 1997, he founded JYP Entertainment, and ended up producing idol groups like g.o.d, which was one of the K-Pop groups that started the first Hallyu wave in Asia. g.o.d’s popularity is still so immense that the group recently made a comeback, to celebrate its fifteenth anniversary.

JYP produced several other acts, but in 2002, it was Rain who ended up becoming JYP Entertainment’s pride and joy. Other popular JYP acts from the early 2000’s included Noel, Park Ji Yoon, and Byul.

In the mid 2000’s, JYP scored major successes with the debuts of Wonder Girls (2007), 2AM, and 2PM (both 2008). The three groups became some of the most popular acts in K-Pop and immensely popular throughout not only Asia but also the world.

The Wonder Girls gained enough attention to result in Perez Hilton showing off their songs, like Tell Me and Nobody; the group ended up touring with the Jonas Brothers and filming a show for Nickelodeon in the US.

2PM started a trend of “beastly idols,” known for athleticism and masculine concepts, which was different from the flower boy trend of other groups like TVXQ, SS501, and Super Junior.

While it looked bad for 2AM, since ballad groups were losing popularity in favor of K-Pop acts in the past, these guys are actually more popular than their label mates, the Wonder Girls and 2PM. Unlike the average K-Pop group, 2AM attracts all sorts of fans, not only the more typical, young fans who tend to be attracted to pop music.

Wonder Girls, 2PM, and 2AM gained a lot of success and were able to promote competitively against Kara, Super Junior, Girls’ Generation, Big Bang, and other groups that were popular in the late 2000’s. Songs by the three JYP groups were extremely popular, and, for a few years, it seemed that JYP was at the very top of its game.

Miss A debuted in 2010 to much acclaim, but it was another two years before JYP debuted a new group, which was the duo 15&;. While 15&; is very talented, it hasn’t attracted as much attention as other YG groups.

It was around 2009 when JYP started to suffer. Out of JYP’s top three teams, only 2AM has kept its original member line-up. This was due to the leader of 2PM, Park Jay (Park Jaebeom) withdrawing from the group and the Wonder Girls focusing on their American promotions. The Wonder Girls also had a lineup change; Sunmi left the group and Hye Lim joined.

Both groups were still considered leaders of Hallyu, but, since then, the Wonder Girls have disbanded, and 2PM, despite promoting continuously to much success, isn’t as active as groups like Big Bang and Super Junior. Furthermore, the influx of rookie groups also endangers 2PM.

Miss A is popular in its own right, but Suzy has become one of Korea’s darlings; the rest of Miss A’s members are well-known, yet not half as popular as Suzy. Miss A last promoted Hush in 2013, and it is almost the end of 2014. It is now JYP’s oldest girl group, but Miss A is hardly active as a whole.

JYP’s other three current acts are two former Wonder Girls, SunMi and Yeeun (who made her solo debut recently as HA:TFELT). Both solo artists are extremely popular and hint to JYP regaining its stride, but that will still wait to be seen.

This year, JYP also debuted GOT7, which achieved a lot of success abroad but has met less acclaim than YG Entertainment’s yet-to-debut group WINNER.

While this could all just mean that JYP is in third place, after the other two largest entertainment companies, that doesn’t really seem to be the case. JYP is still popular and considered one of the best primarily because of its past — the current idols are good, but in an over flooded marketplace, they don’t particularly stand out.

JYP is also rumored to release another boy group and girl group this year, which seems like it would simply overstretch the company’s capabilities.

Other than the fact that few of its artists have as large fanclubs or as many hits as artists at SM and YG, there are a some other reasons JYP is no longer really the top.

The most important factor is the fact that JYP is not one of the biggest three earners in Korea’s entertainment industry.

In March 2014,  SM Entertainment had over 30% of the market, and YG had over 14%, while JYP wasn’t even ranking in the top ten. This was a continued trend that further revealed itself in 2013, when JYP Entertainment was relegated to the “Other” category, rather than gaining its own ranking on Gaon’s market share chart. 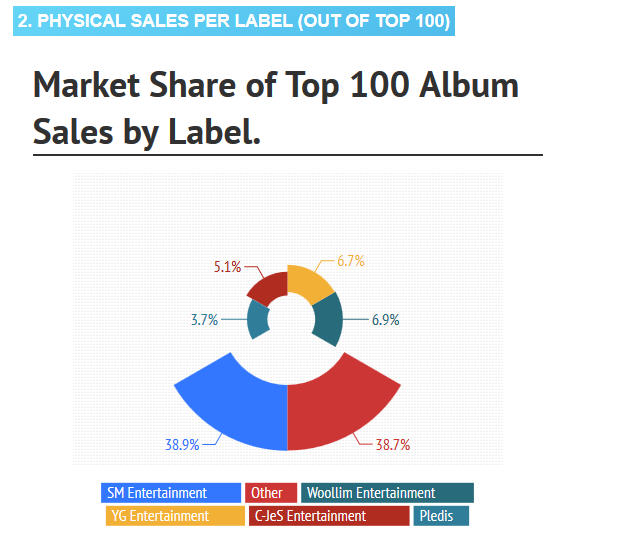 JYP is also facing an investigation into being illegally funded by JYP’s in-laws, who have a relations to the company that is currently being tried for homicide in the Sewol Ferry tragedy. The Korea Herald reported that JYP tried to avoid an investigation by selling JYP Entertainment to YG Entertainment’s CEO, Yang Hyun-Suk. This has resulted in JYP’s stock price plummeting.

Between the financial scandal and the lack of aggressive, constant promotions (unlike SM Entertainment and YG Entertainment), and the fact that the CEO tried to sell the company, JYP is in serious trouble.

Could the company be saved? Maybe.If JYP has successful comebacks from 2PM, 2AM, and Miss A within a span of a few months, and the company’s solo and rookie artists do extremely well, JYP may be able to return to a competitive standpoint. But at the moment, it seems that it is barely managing to hold onto its fading glory.[This inadvertently became part of a series, pointing out issues with each of the big three entertainment companies. The one about YG Entertainment HERE. Look forward to my discussion of SM Entertainment’s practices in an upcoming “Let’s Discuss.”] Be sure to share your thoughts and follow us on Facebook, Twitter, Instagram, Tumblr, and Bloglovin’ so you can keep up with all our posts.