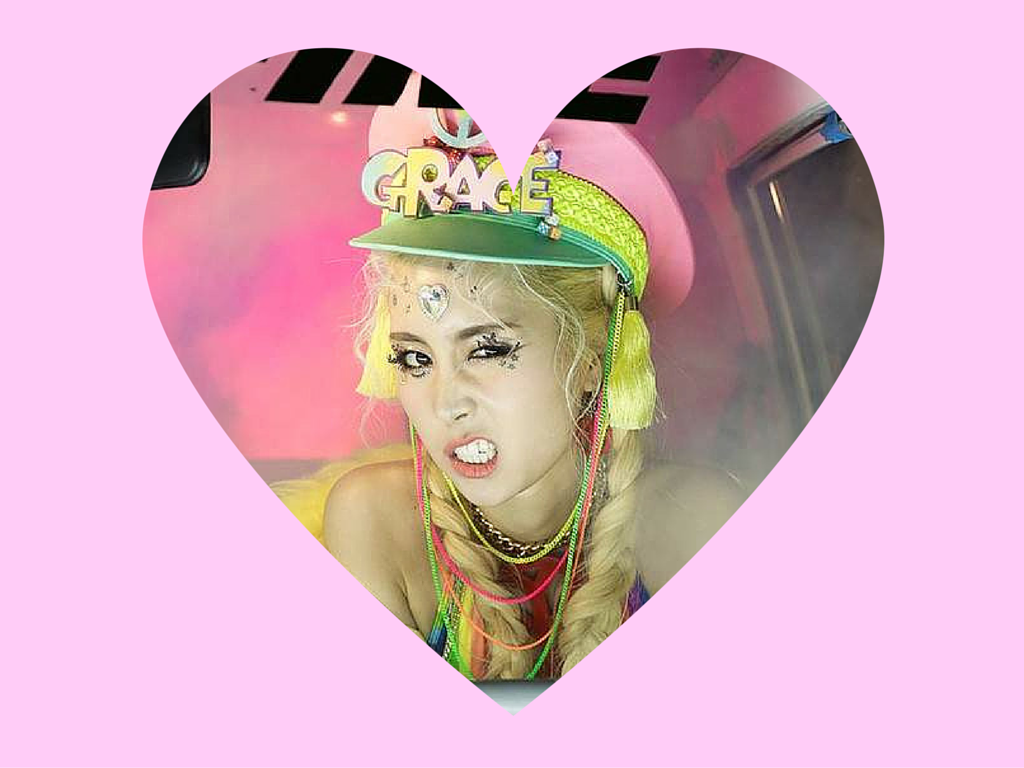 I’m not a big fan of K-pop reaction videos, to he honest. It’s like, why do I want to watch someone I don’t know react to something I do know of? Alas, I follow a couple of such YouTubers because they’re funny and keep me entertained when I’m eating a sandwich and want to watch something fast. And that’s how I stumbled on Grace. Like many people, reading “Grace,” I was drawn by the feigned idea of a The Grace comeback. I, however, found something way cooler and current and totally girl crush worthy.

Quick intro (mostly because I couldn’t find a lot of information on her): Grace Kim is from New York, she was born in 1992, and is the first, maybe only, artist on the new entertainment company YYAC Friend (Young Youth Art Culture) roster. Fin.

Now onto the things we do know; how awesome “I’m Fine” and her overall artistry are. The “I’m Fine” music video looks like an editorial video for online retailers Dolls Kill and Shop Jeen. And while both brands are sometimes hard to digest and too much, Grace found the perfect balance and gave it a kawaii spin that isn’t prevalent in K-pop.

While many K-pop acts these days are moving towards a more consumable sound and fashion, Grace and “I’m Fine” remind me of what got me (and probably many of you too) into K-pop in the first place. Everything from the clothes, to the stunts, to the cinematography and electronic hip-hop hybrid screams “Look at me!” And in a good way. Half of the ensembles and accessories that she wears don’t translate well to everyday life, so why not have an over-the-top music video to show it off? Think 2NE1 with “I Am the Best” or f(x)’s “NU ABO,” when the clothes made you say, “I wish I could rock that.” Truth is, in similar fashion, “I’m Fine” is aesthetics galore. So please pass me three pieces of this eye-candy.

For a debut single, “I’m Fine” is as solid as they come. It’s like a female and minimalistic take on BIGBANG’s “Bang Bang Bang,” and sounds more radio-friendly than most K-pop releases. Grace’s concept, talk-rap and stylistically, reminiscent of early 2NE1 and f(x), but still delivers 100 percent original quirk. And as it custom in K-pop, sometimes the better talented members of groups don’t get to display their full potential and, in a way, this is what happened to Grace in “I’m Fine” as well. Cause homegirl can sang.

Grace’s YouTube page is filled with pre-debut covers, including a beautiful rendition of Taeyang’s “Eyes, Nose, Lips,” and a massive mashup of Big Bang’s “Bang Bang Bang,” Red Velvet’s “Dumb Dumb,” Jay Park’s “Solo,” Girls’ Generation’s “Lion Heart,” and PSY’s “Napal Baji.” Sound bizarre and a total disaster, right? Surprisingly, the singer and her production team pulled it off and delivered a stellar rendition. Moreover, she also uploads original covers where she translates songs from English to Korean or offers her own Korean rap.

To say this New Yorker is talented is an understatement. Not only does she look super cute Overall, Grace came out hard and proved with just one song that we’re witnessing the birth of a future badass queen that aren’t so common in the genre. So yes, I am talking about CL, Lee Hyori, Gain, and Hyuna-type of queen status. Hopefully, “I’m Fine” will pick up more and secure her more releases because I’m definitely not done with what Grace has to offer.