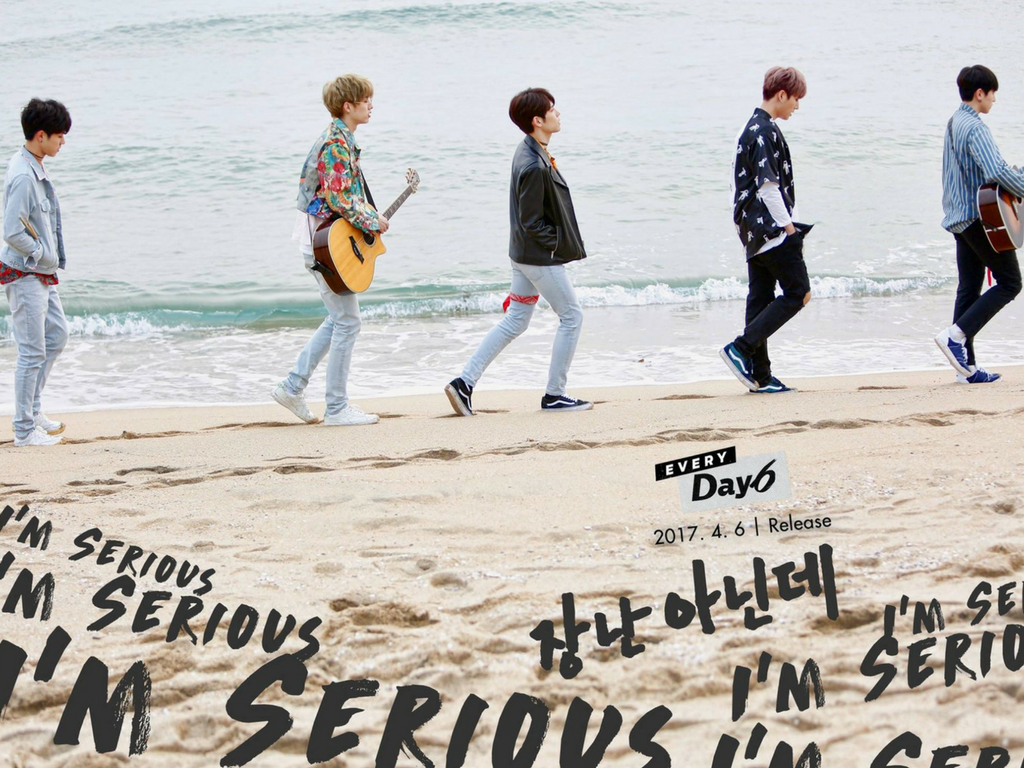 Since debuting in 2015, Day6 has flown under the radar as JYP Entertainment’s underrated rock band. But with their newest project, Every Day6, they’re sure to gain success and recognition. Through this project, they’ll be debuting two new singles on the 6th of every month this year. So far, the releases for the last three months have been fairly typical for what listeners have come to expect from the band since they debuted with “Congratulations.” All of them are angsty and filmed in shadowy locations and while well-made, they’re all very much the same. Steering away from this trend their newest release “I’m Serious” is a sunny, summer-ready pop rock song perfect for a day at the beach.

“I’m Serious” is a simple, sweet, feel-good song, which is a nice change for Day6. While their songs are often upbeat, their lyrics are filled with heartbreak. Finally, Young K (the band’s bassist and primary lyricist) is showing us a side of his lyrics that involve falling in love, albeit unrequited. They’re quite playful lyrics that describe the frustrations of flirting with a seemingly oblivious crush. and vocalist Wonpil, in particular, sings them with just the right amount of lilting charisma. Along with being an overall happier song, “I’m Serious” is also a lot catchier than their previous releases. With some of their earlier songs, it takes a couple of listens before you want to start singing along, but this one gets stuck in your head right away.

Both K-pop and otherwise, it’s rare for a to have all of the vocalists so evenly matched in their abilities. And while all of their voices sounded as amazing as they usually do, lead singer Jae’s in particular seemed to fit this song’s style really well. All of the members also got equal line distribution, though hopefully through Every Day6, we’ll get to hear the band’s drummer Dowoon get a chance to sing. No member shines more than the others,, though, and their voices all have their own unique colors to them. Leader Sungjin’s voice is husky and deep, which balances out Wonpil’s falsetto., Mmeanwhile, Jae’s smooth sound and Young K’s powerful range ties all of them together. This was showcased nicely in the short acapella portion of the bridge. It showed that Day6 is not a band that uses their instruments as a crutch, but rather sound great with and without them.

The music video for “I’m Serious” is quite different from what we normally see from Day6. Their previous videos were filmed in dark locations filled with shadows and artificial light. The members were broody, and even the clothes they wore were dark and heavy. This was fitting, of course, because the songs were about heartbreak. Now, it is nice to see the boys running around on the beach, smiling, and having fun with each other for a change. They genuinely seem like friends instead of a group of strangers who formed a band together.

Similar to the line distribution, all of the members got fair amounts of screentime. It was especially nice to see Dowoon step out from behind his drumset and into the limelight. Because the group’s music videos always go the typical band format rather than a more active one, Dowoon is too often stuck in the background. The only complaint might be that the concept for this video is a lot less unique than some of their others. It certainly isn’t the first time the “day at the beach” concept has been done, but it’s unique for Day6 because this is not typical the side of them we get to see.

With Every Day6, the band is making huge strides towards achieving the fame they deserve and seem to only get better with each new release. The band is vocally very strong, but they also have great command over their instruments. This combination makes a song heavy in acoustic instruments just as lively and audibly interesting as any other song with computerized beats and electric guitars. Hopefully as 2017 continues, we get to see the many sides of Day6 in more depth. What this band can do with their talent has no boundaries and their future releases surely won’t disappoint.