There are lots of K-pop groups out there, but not all of them are popular. What’s more, within a group, some members are always no more popular than others. But this doesn’t mean that some are greater than the rest, I mean, who doesn’t love an underdog? That’s why we’ve listed a few members from underrated, ocassionaly neglected groups that deserve the spotlight. Here are our picks of a few personal favorites that a lot of K-pop fans may be underestimating.

END_OF_DOCUMENT_TOKEN_TO_BE_REPLACED

For those of you who follow Showtime, you are aware that for the first season, SM Entertainment’s EXO was the focus. It was announced earlier in 2014 that Beast, of Cube Entertainment, would take over for the second season. I was excited for Beast to have their own reality show, although after watching EXO’s Showtime, I wasn’t sure how it would match up.

After watching the first nine episodes of Showtime Burning The Beast, I can’t help but become completely enthralled with it. I don’t think there were any intentions of comparing EXO’s Showtime to Beast’s, and I don’t intend to do that in this article. I want to focus on the overall feel of the show and occasionally add in how I feel it differs from EXO’s Showtime.

To begin with, let’s discuss the title of the second season: Showtime Burning the Beast. Is that ‘burning’ as in embarrassing the members throughout the show, is that ‘burning’ as in a rebirth of Beast’s variety presence, or is that ‘burning’ because it’s a fun English word and it’s decent alliteration? I’m not sure, but to be honest it could be all three based on the episodes aired so far. In each episode, at least one member is momentarily embarrassed, mostly due to the fact that the other members make fun of them or dwell on a mistake they made.

The best friends episode (episode 7) saw Kikwang and his friend fail the mission and therefore complete the punishment, which was to go to the center of Myungdung and do a Gosa for Beast’s new album. Then in episode 8, Beast could have had an embarrassing outcome for their telepathy missions, but they managed to squeak by with a minor punishment, but not before picking out what style of underwear Yoseob would most likely buy. Obviously these embarrassing punishments make for good television and ratings.

Looking at ‘Burning the Beast’ in a rebirth sense is also plausible. During the first episode, the members voiced how this was a chance for them to show their improved variety skills and show a different side of Beast to their fans, the human side. Considering their last reality show was years before, clearly the members have changed in looks, confidence, and personality. From episode 1, it is clear that the members just want to be themselves and have a good time.

And let’s be honest, Burning the Beast does have a nice ring to it. Whereas the first season was called EXO’s Showtime, which was simple and to the point. Burning the Beast, at least to me, is more elaborate than Beast’s Showtime, and also makes the second season theirs as opposed to constant comparisons to the first season with EXO. Maybe that’s why the show isn’t always going to be titled [insert band name here]’s Showtime.

The content of the show is based around Q&A provided by fans and relayed to the members by the PD, which makes me wonder how much shows like this are scripted. However, in this instance, I don’t think the show is fully scripted. Or it’s just my blind love for Beast that’s clouding my judgement?

After each episode I watch, the member’s emotions, actions, and conversations feel genuine (although I’ve never met any of the members and therefore have no previous interactions to use as a basis). But it’s the light-hearted joking and poking fun at each other that you can’t script.

All of the members are active in their own ways throughout each episode. Hyunseung further solidifies his 4D image, Junhyung isn’t afraid to show his love for the camera, Dongwoon is just Dongwoon, Doojoon acts as the leader/MC and is competitive, Kikwang shows his variety show experience, and Yoseob is constantly smiling and making smart remarks. Frankly, they all make smart remarks and their camaraderie and banter with each other just seems like something so organic that it cannot be scripted.

That’s one thing I enjoy more about season 2 of Showtime in comparison to season 1, that I, as a viewer, feel that there is more of a brotherhood among the Beast members as opposed to the members of EXO. I’m not saying EXO doesn’t have brother-like bonds, but it’s easier to show the true personalities of six guys as opposed to twelve and Beast has been in the industry since 2009 and are more comfortable with themselves, each other and in front of a camera and crew. They’re more natural and tend to ignore the cameras. And they definitely don’t mind if they make fools of themselves. 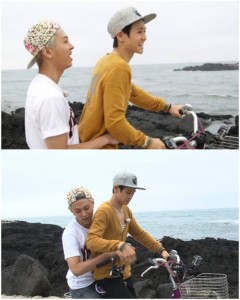 The way the show is shot, and due in large part to the members’ closeness with each other, at times, it really seems like we are witnessing a group of friends just hanging out and having a good time. That is really all that Burning the Beast is about. It shows the camaraderie and fun the members have with each other and allows fans to get a glimpse of their envious relationship with each other once a week.

Are you guys enjoying the second season of Showtime or do you prefer the first season with EXO? Be sure to share your thoughts and follow us on Facebook, Twitter, Instagram, Tumblr, and Bloglovin’ so you can keep up with all our posts.