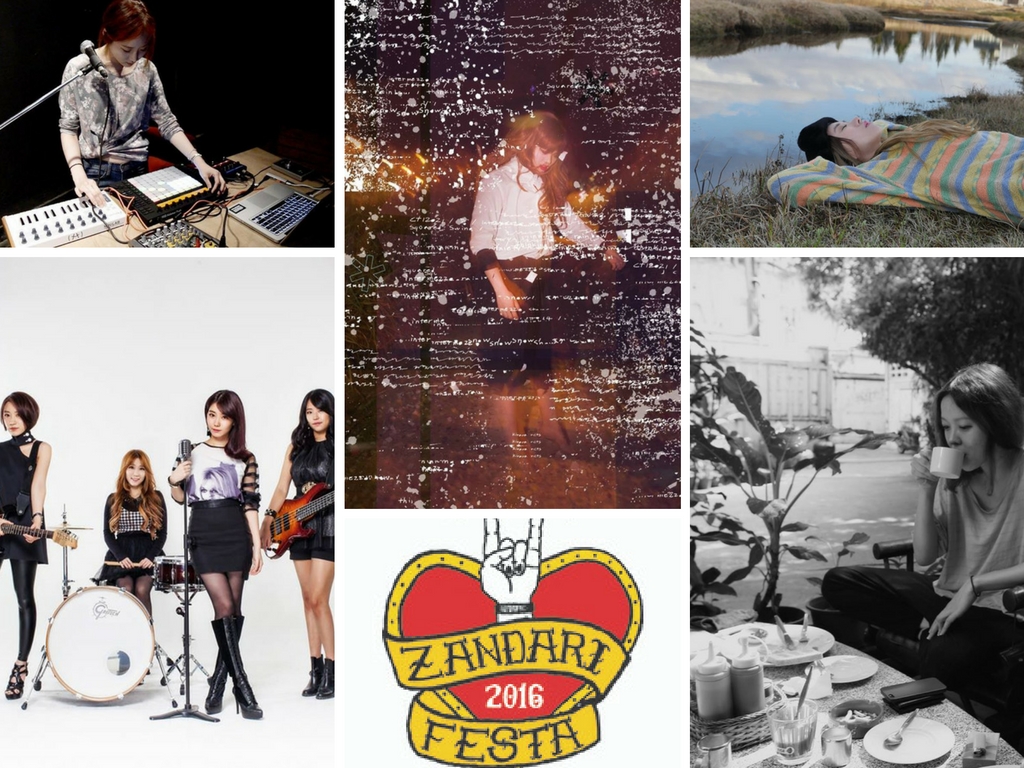 While South Korea is musically known for “Gangnam Style” and K-pop, the country has a burgeoning indie scene based in Seoul’s Hongdae neighborhood. Each year, Zandari Festa brings a bevy of Korean and overseas musicians to the area to perform around town at the Korean Peninsula’s closest thing to SXSW. This year, Zandari Festa will take place from Sept. 30-Oct. 3 and feature a lot of acts that we know and love, like Love X Stereo, Patients, The Barberettes and more.

Since the festival began in 2012, it has been integral in showcasing some of Korea’s best lesser-known talent so we always love to take a look at the roster to see what musicians we should be listening to. Like many music festivals, and music industries, throughout the world, Zandari Festa is geared heavily towards male and co-ed music acts, so we decided to highlight some of our favorite female Korean indie acts who will absolutely slay the audiences at this year’s Festa.

What happens when you combine the spunk and beauty of Girls’ Generation with the rock flair of CNBLUE and Day6, then actually let them create their own music? Sweet Revenge. The most idol-like of all-female acts at this year’s Zandari Festa, Sweet Revenge is pop-rock quartet. Even though they look like any other K-pop girl group out there, Sweet Revenge writes all of their songs and plays live. In heels! Their more recent songs, like last year’s “Fly High,” feel like a hybrid of J-pop, primarily thanks to the lead vocalists high-pitched vocals, and American alternative rock.

Sweet Revenge will perform at Evans Lounge at 5PM on Oct. 3.

The folk-pop singer-songwriter Shin Seol Hee released her first album in 2013 and since then has released an album and several singles. Her sound primarily revolves around strumming guitars intertwined with other sounds, such as the lilting chimes and electronic elements like what was heard on last year’s “Circle.” She has a breathy voice with a surprisingly strong tone so hearing her sing is a sheer pleasure. Her latest single, “Another Season,” was released just this week (Sept. 19) so take a listen ahead of Zandari Festa.

Shin Seol Hee is performing at Veloso on Oct. 2 at 5PM.

After changing her name from STQ Project, Kirara’s become a fan favorite and is rising as a Korean electronica darling. The electro-pop tunes that the producer has put together are sprinkled heavily with 8-bit blips and modern rock and dance sounds to create a style that’s very much of the moment while still sounding like it came out of an ‘80s arcade. Anybody who is a fan of Clazziquai Project will certainly fall in love with her sound. Definitely go listen to her.

Kirara is performing at Steel Face on Oct. 3 at 5PM.

If you’ve ever watched a Korean drama, there’s nearly always one song on the soundtrack (OST) that is a dreamy tune with comforting words sung softly over the melody. Earip’s moving ballads sound exactly like that and have ever since she released her first album in 2005. The folk singer released her fifth album, Exile, earlier this year with the music video for the single. Our personal favorite is the sweet-sounding “뒷일을 부탁해” from 2013.

Earip is performing at Steel Face Rooftop on Oct. 3 at 6PM.

Like Kirara, Aseul is a rising star in the Korean electropop scene but Aseul’s music is more ethereal than Kirara’s playful sound. Her latest single, June’s “Fisher,” is a trance-filled earworm that takes nearly two minutes before Aseul’s vocals join the fray. Previously known as Yukari, Aseul has produced a variety of music since 2014 and this will be her first time at Zandari Festa with the new moniker. If you’re in the area, definitely check her out. (And tag us in the videos so we can pretend we’re experiencing her sound too!)

Aseul is performing at Steel Face on Oct. 3 at 7PM.

What do you think of these acts playing at Zandari Festa? Whose set would you like to attend the most? Share your thoughts in the comment section below and be sure to subscribe to the site and follow us on Facebook,Twitter,Instagram, and Tumblr to keep up with all of our posts.