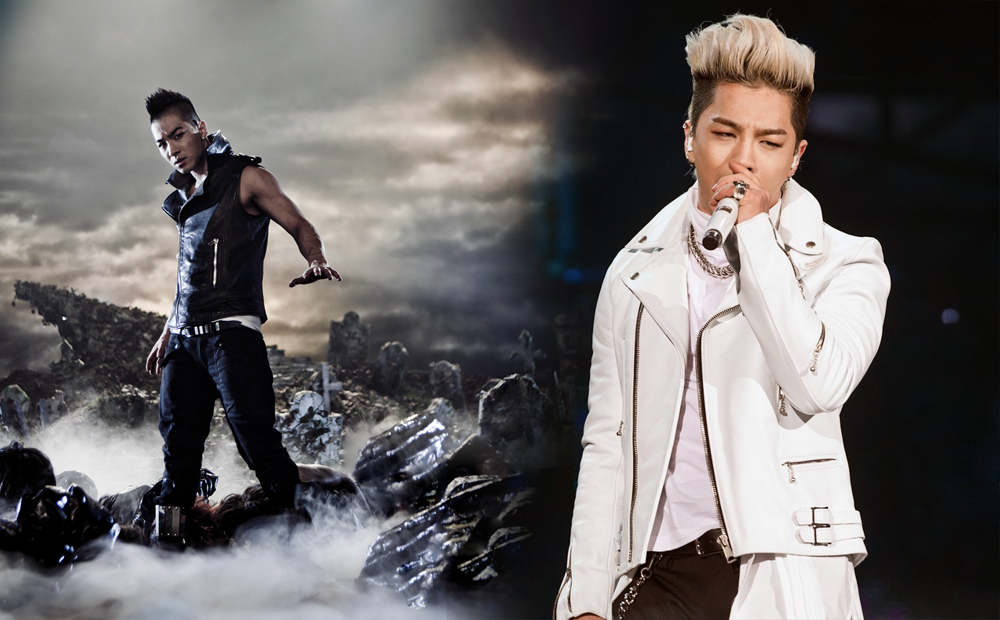 Taeyang has had a few changes in fashion as a solo artist and within the group, but it’s safe to say that, up until BIGBANG’s Alive, the R&B influence in his style was there: from the snap backs to the baggy jeans to the fedoras. But then he made a major turn with Monster, which back then, I thought was just due to the music video’s plot line. Ringa Linga proved that this trendier version of Taeyang was staying. And while fans (me included) loved it and everyone received it well, including the media, it was hard not to notice G-Dragon’s staple all over it. This made me wonder, is Taeyang maturing as an artist or is he allowing his fellow BIGBANG member or YG Entertainment to craft him into a brand name similar to G-Dragon? Let’s take a detailed look at his solo concepts over the years:

His first mini album Hot was released in 2008.  His singles were Prayer and Only Look at Me, written and produced by Teddy. The R&B track displayed Taeyang in the music video shirtless, in jeans, diamond earrings, snapback cocked to the side –very à la Usher.

Then came his first full-length album Solar in 2010, also R&B, where he delivered hits like I Need a Girl, Where U At?, Wedding Dress, and I’ll Be There. Most of the aforementioned songs were produced by Teddy again, while I Need a Girl was not only co-written by G-Dragon but he also appeared in the music video and featured on the song. In this music video, we see a more sartorial look to Taeyang with the R&B-Soul flow. Wedding Dress has a good balance of casual and formal (I mean, he is at a wedding after all).

The last sighting of the Usher-esque Taeyang was probably in BIGBANG’S Fantastic Baby, where we saw him incorporate more color and vividness to his attire. It was then definitely gone by Monster. But I digress; I won’t reference BIGBANG’s concepts and genre too much since that’s a whole different thing.

Monster marked the pivotal moment where Taeyang switched styles, going from soulful R&B to electronic glam Hip Hop –or G-Dragon-fied. Yes, by Ringa Linga, his influence was apparent and probably due to G-Dragon himself producing and writing the song. The BIGBANG leader also had a few cameos in the music video.

Ringa Linga mixes EDM with Hip Hop and loses track of the R&B influence he previously had, musically and fashion-wise. On his behalf, it came at a time where R&B lost its popularity of the 2000’s and Hip Hop resurfaced in mainstream music. The only traces of the Usher-esque Taeyang are the vocals and dance moves –but even that became stronger and focused more on the choreography itself as an art than being sex on a stick.

Furthermore, both guys collaborated and created the TY & GD for the Stampd collection that included a series of shirts, snapbacks, and sweatshirts they sported on the video. They also wore pieces by Rick Owens and Givenchy to create a ghetto gothic look.

However, this change did not hit us with surprise. The boys had long paraded themselves last summer at Paris Fashion Week, where we spotted Taeyang wearing outfits that were far trendier than baggy jeans and a crisp white tee. Taeyang and G-Dragon attended all the hot ticket shows such as Rick Owens, Givenchy (his favorite brand), Kenzo, and more.

Rise will mark Taeyang’s third solo project, so what can we expect? I believe it will probably be the same ghetto gothic concept with some sort of twist. Maybe adding more trap like in CL’s solo MTBD. And, while I completely dig this look and sound since I am a fan, I have to wonder about the authenticity of it all.

Sure, K-Pop idols are known to be plastic figurines put on stage by the companies that manufactured them. But YG Entertainment artists are equally known for having creative freedom –or more so than most. Taeyang must have some say in his solo projects, right? After all, he did compose and co-write Solar, Wedding Dress, and Where U At and wrote the lyrics for Take it Slow on his own from the Solar album. Ringa Linga, on the other hand and as mentioned before, was written and produced by G-Dragon and another producer.

As I said previously, I’m a fan of this ghetto gothic plus the Hip Hop/EDM concept Taeyang has embarked with,  but I would love it even more if it came from his own creativity and being inspired by G-Dragon or other artists, rather than recreating what people in control tell him to. Maybe Taeyang has matured into a trendier, more playful style. Or maybe YG noticed that G-Dragon’s Coup d’état and One of a Kind were well received around the world and want to cash in on Taeyang as well. I guess we’ll have to wait until June 2nd to see what Taeyang, G-Dragon, Teddy, Choice37, and/or anyone else working for YG have in store for us. I know I’m eager to find out.

What do you think of Taeyang’s style, is it fabricated by someone at YG or authentically his own? Don’t forget to subscribe to the site and follow us on Facebook, Twitter, Instagram, Tumblr, and Bloglovin’ so you can keep up with all our posts.