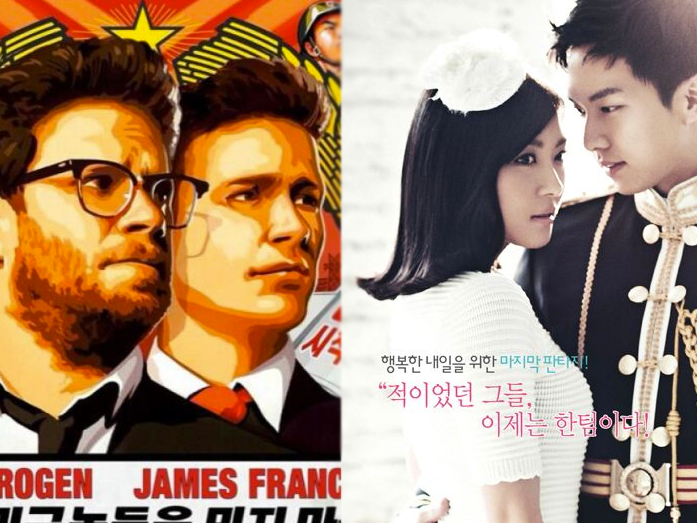 James Franco and Seth Rogen think that North Korea is a joke, based on the trailers for The Interview. But South Korea doesn’t really think the same way.

North Korea may be a crazy country that allegedly hacked Sony because of a single movie, but South Korea thinks of North Korea less as the deranged cousin that it doesn’t want to see as much as a long-lost sibling. Sometimes  North and South Korea are portrayed as lovers, sometimes as mortal enemies; it just depends on what movie or show you’re watching.

Hot on the heels of one of the biggest entertainment industry hacks in history, the Seth Rogen-James Franco comedy The Interview is all people seem to be able to talk about. And the fact that it is a comedy movie about assassinating the dictator of North Korea, Kim Jong Un, emphasizes how Hollywood thinks that North Korea is a big joke.

“The Interview” via Tumblr

The first film Korean blockbuster, Shiri (also known as Swiri) had it all; explosives, spies, romance, North Korean-South Korean reunification… Yes, Shiri was the first Korean film to really address the fact that North Korea, while depicted as a military state with countless deadly spies, is South Korea’s twin state. The two countries have been divided since the 1940’s and the politicians in the film were meeting to figure out a potential path to reuniting the two halves of the whole. Shiri humanized North Korea in a way that had never been seen in South Korean film.

Also on KultScene: 8 Words You Began Using as a K-Pop Fan

The movie ends with many deaths and a tragic love story between North and South Korean operatives. But the main point of the movie is that they are simply Korean, it doesn’t matter what side of the DMZ (Demilitarized Zone that separates the Koreas) someone lives on. So too, does the shiri fish swims in both North Korean and South Korean waters, but doesn’t know where one country’s waters begin and the others ends.

A drama in a what-if world where South Korea retained its monarchy after the Korean War, but the countries are still divided. So many different impossible things were going on during this television show that it seems unlikely that anything real was truly represented. But the tensions between North and South Korea, where sometimes the two countries are on the brink of war and other times working together to help the people of both nations, were accurately portrayed.

The idea of North Korea and South Korea being lovers who are separated by outside factors has become a sort of anthropological narrative in South Korea. King 2 Hearts is just one example of a situation where the two lovers, Lee Seung Gi and Ha Ji Won, are stand in for the tempestuous relationship of the country. Unlike Shiri where the lovers were unable to be together due to the differences, King 2 Hearts represents a more hopeful view for the future of the two Koreas.

This film takes a different take on the story and instead of showing the relationship between the two countries and the politicians who trying to bring about reunification like the previous examples, Secretly, Greatly shows North Korean spies falling in love with South Korea. The sleeper agents spend several years integrating into South Korean life in order to save their families from torture in North Korea, and after going to South Korea they see what it’s like to be average parts of society. Secretly, Greatly depicts North Korea as a ruthless country that is willing to kill its own elite operatives rather than risk losing those very same spies, and demands everything from its people without giving much back.

The film shows the idea that many South Koreans have of North Korea: it is an evil place that doesn’t care about its people. Secretly, Greatly is itself a comedy, but a dark comedy that is tragic. The leaders of the country are not people to mock, but instead people to be afraid of. It’s a very different take on North Korea than Shiri and King 2 Hearts, but that is because North Korea takes on so many roles as the rival nation to South Korea.

North Korea is portrayed many ways: lover, potential ally, enemy, etc. But South Korean filmmakers do not mock North Korea as openly as Hollywood’s The Interview, because such a complicated matter does not warrant complete disregard.

Introduction to the Korean New Wave of Cinema