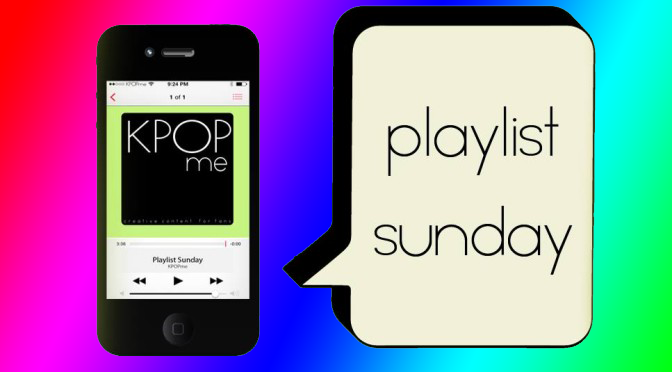 Since we focused on girls and guys the past couple of weeks for Playlist Sunday, we thought this week we would merge the two and showcase some of our favorite duets by male and female artists. Our list goes from power ballads to up-tempo jams, but all in all, some great picks from even greater performers.

Eric Nam and SPICA’s Boa Kim paired up for a simple yet beautiful cover of A Great Big World’s Say Something at the beginning of this year, and it’s definitely my pick for this week. From the somber video to the great combination of their voices, what’s not to like about this pair? I really like how their vocal tones, while different from A Great Big World and Christina Aguilera’s, still retain the feeling of the song. They add just a hint of that uniqueness that brings this piece together in their own special way. Also, they’re really cute at the end of the clip, so that’s a bonus!

G-Dragon and Jennie Kim sing about the dark side of love in Black. There are two versions of Black on GD’s Coup D’Etat album, the second with Sky Ferreira, but I prefer the version with Jennie Kim. To me, her voice carries more raw emotion, which is a perfect fit for this song. GD’s frustrations are apparent as he raps the verses. This song is simple in musicality and at first glance in vocals as well. But both GD and Jennie Kim carry in their voices the emotions needed for this song.

7989 is a sad love song that combines two of SM Entertainment’s top voices, Kangta and Taeyeon, to tell the story of a couple that is in love with one another but doesn’t confess. The lyrics are heartfelt, addressing a situation where both is aware of his/her own emotions, but not confident enough to say that they want to spend more time together with the other, that they don’t want the other looking at anyone else. Their evocative vocals make the confusing yet touching situation clear, even if the listener is unaware of what the lyrics mean.

Although the two never released a music video for the song, they have performed it together, and Kangta has performed it at several SMTOWN concerts with various artists (including f(x)’s Sulli and Go Ara). Fans probably want to now see Taeyeon perform it with her boyfriend, EXO’s Baekyeon, but the song is firmly Kangta’s, so it seems a bit unlikely. Regardless of who is singing it, the song is a beautiful one that any listener can enjoy.

The first time I heard My Ear’s Candy was at this year’s L.A. Korea Festival. I had no idea who Baek Ji Young was, but I knew I wanted to go to the restroom before, let’s say, INFINITE or 2PM came out. But then, the latter’s Taecyeon came out wearing a plastic-y hot pink button down shirt, ridiculous but hot at the same time, I just had to stay and watch the performance.

The plot of the video seems to be set in the future, judging by Taecyeon’s series of similar futuristic ensembles that highlight his hotness. My favorite look is the white suit with silver lipstick, swoon! Oh, and Ji Young looks lovely too… Moreover, the duo seems like they’re close, so the dance moves where they caress each other don’t seem awkward.

Despite the video and even beat seeming incredibly dated by now (song came out in 2009), it still has a good ring to it and is as catchy as ever. Besides, the hook where they alternate saying “I love you” in four different languages is fun to sing along to.

Henry’s 1-4-3 (I Love You) brings me back so many good memories. Not only did I love that song when I first heard it on the album, but then, it was announced that he was doing a duet with one of my favorite f(x) member Amber. I got really excited. Both of them have amazing personalities, and, at that time, I thought it was going to be an amazing match.

When the song first came out, I blasted it out loud every weekend in my car. Then KCON 2013 came and I had the chance to witness the live version of the song. Even if Amber only comes at the end of the song to rap, it is a very memorable duet to me. I really love the beat and how well both of them compliment each other.

Let’s Discuss: WINNER As A New Type Of Idol
Scroll to top