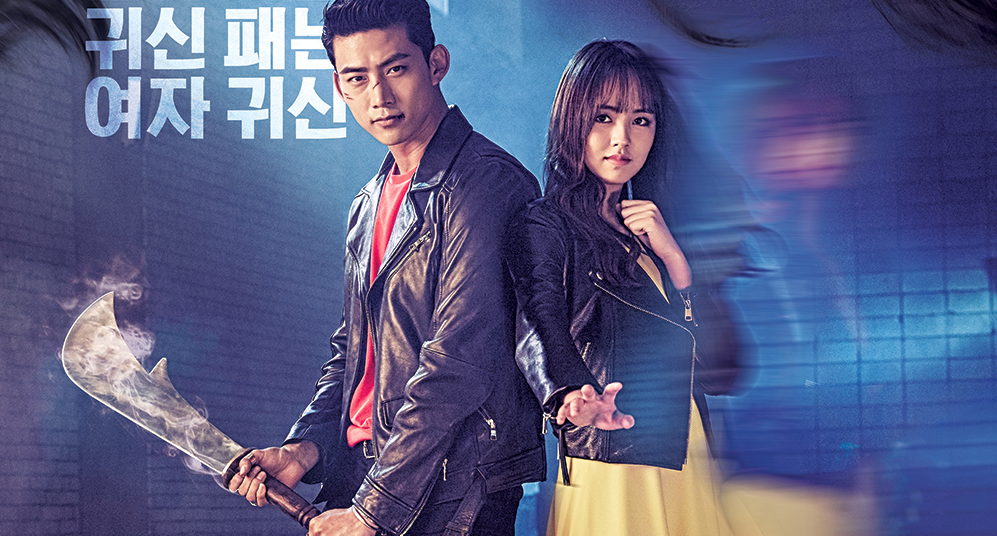 During the first few frames of “Let’s Fight Ghost,” starring 2PM’s Ok Taecyeon and Kim So Hyun, it seemed as if the drama might be haunted by the past of other recent tvN spectral dramas, like “The Master’s Sun,” Oh My Ghostess,”and “Who Are You.” The dramas set the bar for spooky tVN shows as they featured plenty of gloomy ghosts and star-crossed supernatural pairings. But “Let’s Fight Ghost” takes a different horror rom-com angle; a lighter, leave-you-grinning take on the veil between life and death.

Taecyeon plays the part of a college student well, but then it’s the right kind of role for him. The 2PM rapper has a boyish, wide-eyed charm that makes him a likable if not nuanced actor. He always seems slightly embarrassed that anyone has asked him to act, but his earnestness and charismatic smile are seductive. He’s appealing enough as a character who’s hired to take out ghosts — a sort of supernatural fixer or gangster ghostbuster. As an actor, Taecyeon knows his way around ghosts. It’s not his first drama dealing with them firsthand: he played a supernaturally challenged detective in “Who Are You?”

Also on KultScene: 5 Things To Know About ‘Uncontrollably Fond’

Here Taecyeon plays a main character who sees ghosts just like Gong Hyo Jin’s character in “The Master’s Sun.” But in this ghost story, the person who sees spirits is a man with his fists up rather than a tormented woman trying to avoid the apparitions. Rather than trying to run from the specters, only to eventually be scared into carrying out their mission, Taecyeon’s ghost visionary both seeks out and literally knocks ghosts out into submission. And, unlike So Ji Sub’s ghost-repellant character, Taecyeon’s love interest does not make ghosts disappear. Instead, she’s a ghost in her own right.


That’s where the star-crossed lover part comes in…

It doesn’t get more star-crossed than falling in love with a person who is not alive. It rarely works out well, even in K-dramas. Yes, Park Bon Pal, Taecyeon’s character, can see and talk to Kim Hyun Ji, the spectre played by Kim So Hyun, but the relationship is likely doomed by her lifeless state. Kim Hyun Ji’s lack of physical substance will definitely make it hard for Park Bon Pal to introduce her to his friends and family. Admitting that he was dating a ghost might qualify him for some extensive therapy.

And as for the relationship, Taecyeon and Kim So Hyun seem well matched in energy. He’s actually a decade older than the child actress, but she qualifies as his acting senior, since she debuted 10 years ago while he’s only been acting for six. The drama explains their age disparity by saying she’s been dead for a while so that she is actually older… Dead years apparently count…

Actress Kim So Hyun is always appealing in fresh wholesome way, but this time, she plays a sassy student ghost eager to be kissed. Kim’s Kim Hyun Ji can’t remember her former life and is somehow convinced that kissing Taecyeon’s character will help restore lost memories. One of the actress’ last roles was playing twin students in “Who Are You: School 2015?” What this role lacks in complexity, compared to her character in “Who Are You: School 2015,” it makes up for with sheer sassiness. And Kim seems worlds older. At 17, this actress is no longer a child but becoming a beautiful and flirtatious leading lady.

Also on KultScene: Park Yoochun & The Changing Perception Of Leading Men in K-Dramas

Ghost dramas don’t always do well, although “Oh My Ghostess” and “The Master’s Sun” were both successful, ratings-wise. “Let’s Fight Ghost” is more like “Oh My Ghostess,” as the romantic parameters of the plot were well established early on. It’s not as comically tortured nor funnily foreboding as “The Master’s Sun.” The “Let’s Fight” ghosts are frightening, but can be physically vanquished. So far, they don’t expect emotionally wrenching missions to be carried out, no grieving family members to contact, no secrets to reveal.

Kim So Hyun’s ghost is not as quirky as Kim Seul Gi’s virgin ghost in “Oh My Ghostess.” Nor is she as tragic as Ji Hyun’s heartbreaking ghost in SBS’s 2011 drama, “49 Days.” But like both of those ghosts, she has a mission of her own: she needs to revive her memories. And to do so, she only needs to get closer to Taecyeon’s lips. Her past and future depend on the kind of kiss that woke Sleeping Beauty.

So far, “Let’s Fight Ghost” is as fluffy as a dandelion puff and as PG as an after school special, but it’s entertainingly light and silly. The cinematography is quick paced, with a graphic novel feel, and the actors look like they’re having fun. Contributing to the fun are performances by Kim Sang Ho as a has-been exorcist, Lee Do Yeon as a love-obsessed ghost, and Kang Ki Young and David Lee as intrepid ghost hunters and videographers. The tone may change in subsequent episodes, but it’s worth a watch if you are in the mood for an uplifting romcom.

Are you watching this drama? What do you think? Please let us know in the comments below and be sure to subscribe to the site and follow us on Facebook, Twitter, Instagram, and Tumblr to keep up with all of our posts.

5 Songs to Get You Ready for Dok2 & The Quiett’s NO RE$T US Tour
Scroll to top
×
Loading Comments...