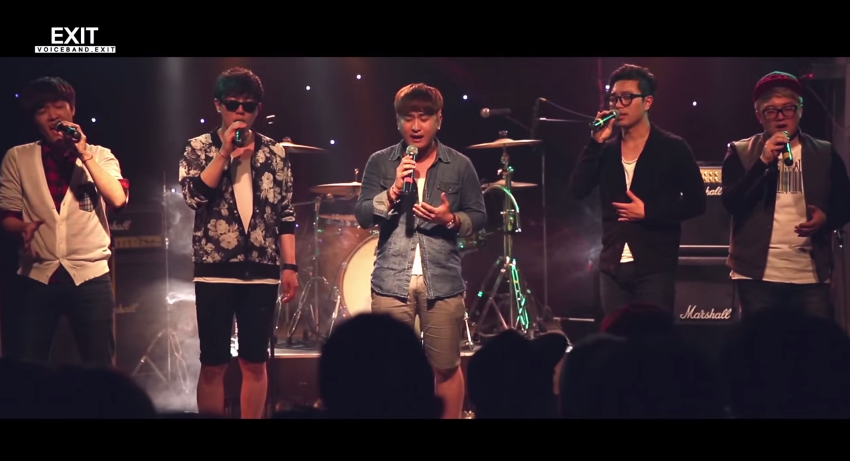 The power of the Internet is unbelievable. I didn’t know about this group until recently. And by recently, I mean a few minutes before sitting down to write this article. But, as I listened to a video of a cappella group Exit, I wanted to write about them for a number of reasons. So let’s get started:

Exit is a five-member a cappella group who just released their first mini album on August 12th. But looking at their YouTube channel, it’s clear that they began to “promote” themselves well before the release of their mini. They have been on YouTube for three years, but are only now gaining commercial recognition. Their channel consists of a cappella covers of famous Korean and Western artists. Each video shows a bit of the members’ personality and is a great way for people to see the talent these guys have.

They also sing in English. It may not be perfect English, but does that really matter? No, it does not. Exit’s English is perfectly understandable and the fact that everything you hear is created with just these five guys’ voices is more than enough to overlook mispronunciations. It’s not important. What is important is that native English speakers can understand them and therefore feel more connected to them than other groups. They are marketing themselves to English speakers as well as Korean speakers.

Obviously choosing popular songs to cover will also increase their views online and therefore their name will (theoretically) spread around the internet and thus popularity will ensue. It will be difficult for Exit to break into the K-Pop scene, which may not even be their goal. But the fact that 1theK uploaded one of their videos makes it seem like they want to broaden their fan base.

Why should you care about Exit:

You should care about Exit because, well, they’re talented. There are A LOT of talented K-Pop groups, artists, individuals out there now, but Exit brings things to a whole new level. They are the first a cappella group (that I am aware of) that is being promoted by a large company, 1theK (even if it’s only one video). In the about section of the video of Exit, 1theK states:

From their videos online, Exit definitely deserves to have their music and talent shared in Korea and around the world. 1theK is helping to shed light on a cappella in general, and on Exit in particular. These five men use only their voices to create music. They are the instruments, the vocals, and they create an atmosphere of joy with these amazing talents.

A cappella groups in general are obviously full of talented individuals and Exit is no exception. So why should you care about them? Because they are a Korean a cappella group that have been around for a while, but are just releasing their first mini album and getting recognition for their talents online.

Each member not only adds to the production of the song, but they also lend their vocals. In some a cappella groups there are people who are strictly vocals, but Exit utilizes everyone’s voices and vocals to create beautiful harmonies and performances.

Even if you are not a fan of a cappella groups or are only into K-Pop, you should take some time to listen to Exit. Their skills and talent will entice you to watch more of their videos and hopefully you will become a new fan and explore their music collection. I leave you with this: