In only half a decade, K-R&B and Soul singer Golden has written and rewritten his own narrative many times. From the smooth vocal pop and upbeat R&B outfits of his early career to the piano ballads on last year’s Hate Everything EP, Golden has moved in and out of the mainstream, centering his own artistry and finding new direction within the thriving soul, R&B, and hip-hop realms of Korean music.

In 2017, he left K-pop powerhouse label JYP Entertainment to join H1GHR MUSIC, a label founded by R&B heavyweight Jay Park for rising hip-hop and R&B artists to pioneer their own musical and creative pursuits. In the world of K-music, such a shift is nothing short of a redefining. Golden isn’t afraid of new beginnings, especially when it comes to creating music in new ways. Last year, he even went on Voice of Korea, a domestic singing TV competition, in a move to re-experience the rookie mindset all over again. Naturally, he took home the first place spot.

I got the chance to speak with Golden over email and ask about the creative process behind the albums, as well as his larger direction as an artist and vocal powerhouse in the exploding Korean music industry.

KultScene: What was it like collaborating with H1GHR artists on these albums? Do you find that your artistic process changes when you collaborate versus when you make solo music?

Golden: It was a bit challenging, but also fun, to try a little different sounds and styles with different artists.

Which H1GHR MUSIC artist did you enjoy working with the most on the H1GHR projects, and why?

I’d say it’s Big Naughty, because I was very impressed with his execution and some of his choices on melody.

How does your work on RED TAPE and BLUE TAPE differ from your previous work? What was new, exciting, or scary to you about these projects?

Well actually, I wasn’t as involved on the RED TAPE except for the intro track “H1GHR” that Jay Park and I participated in. BLUE TAPE was fun, and I like the fact that most songs from the album are uplifting and feel-good types of songs. I think people need that right now.

Is there a particular song on BLUE TAPE that you’re particularly excited for fans to hear? What is special about that track?

Definitely my solo song “Selfish.” It’s the song that I was keeping for my own album, but I’m happy that it’s released sooner through this project.

You’ve been in the industry for a while, and have gotten to work under different agencies and labels, and with different artists. How is H1GHR different from previous labels you’ve been under?

H1GHR music has a system where artists get to have more creative control which is always good for artists like myself who creates all the contents of mine. The former label that I was in was a larger entertainment company that mainly produced idol groups with a more strict system.

You just won Voice of Korea. Congratulations! What inspired you to go on the show, and how did it change your outlook as a singer and artist?

The production team reached out to me and I thought it’d be a good opportunity for me to learn how to consistently deliver my music under pressure. I’m very grateful for the experience.

Your music has taken a lot of different forms, including smooth R&B, upbeat dance tracks, and piano ballads. Which is your favorite sound, and is there a particular style or genre you’ll be doing more of in the future?

I’d have to say “Hate Everything” type of genre. Don’t we all in 2020? Lol… I’m really just open to trying new different things, whether it’s in music or anything in life. But musically, I definitely want to try and make a jazz album.

You make a lot of English-language and Korean-language music, and fans really love both. Does the process of writing and making a song differ depending on what language you’re writing in? How does your English discography feel different than your Korean discography, and how are they similar?

I read that phonetically, it is easier to sing in English than Korean. Many Korean writers write the English lyrics first for that reason. But yeah, it’s definitely a blessing to be able to sing and write in different languages.

Since your debut—how do you think your sound has changed over time? Even more personally, how have you changed as a person since you’ve entered the spotlight?

I’ve written many different styles of music. And I think it helped me become more adventurous and open minded as a person. And I think my music has become more soulful naturally with more experience as I got older.

Fans often debate whether K-R&B and Korean Hip-hop is related to, part of, or completely separate from K-pop. Given that you’re an artist who dabbles in all three kinds of music, what’s your take on that?

This is an important question, I think. In my opinion, musically, most K-pop songs are rooted in the western music. R&B/Hip-hop music started in the U.S., but especially because of the internet, we all have access to all kinds of music all around the world. Music has become universal. However, “K-pop” to me, is not just about music. I see it as more of a cultural phenomenon followed by a very unique and wide international fan base.

What advice do you have for the amateur performers, songwriters, producers, singers, and rappers out there?

Study the business before you get into it. Music business is changing drastically. All talents will have to have more knowledge in business and creative ideas to make profits off their hard work. Also, stay humble so that you can always grow and evolve.

What can we expect next from you? What would be a dream collaboration to feature on your next release?

I’m working on a few collaborations right now. I just want to continue to make good music that moves me and inspires people around the world. That’s all.

More broadly, what is the message you hope listeners take from your music?

Everything. The pain, joy and a lot of love. 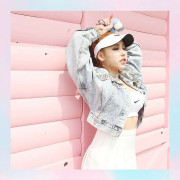