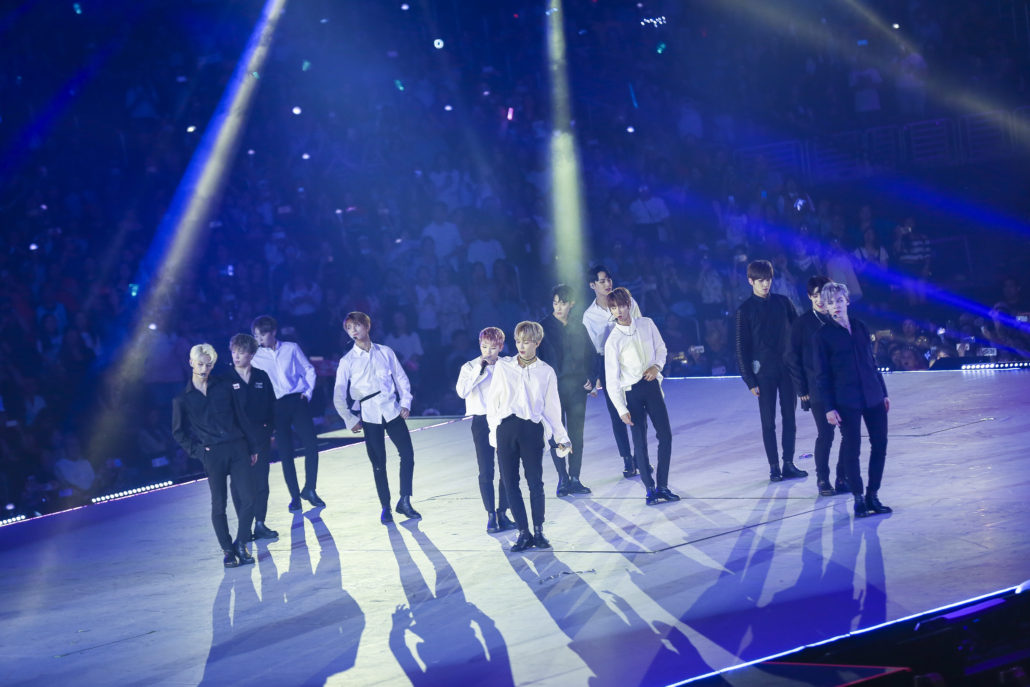 Like every year since it started, KCON 2017 LA presented by Toyota outdid themselves with their biggest show yet. In previous years, the event has tried to diversify and stretch the concept of “K-pop,” bringing R&B singers, rappers, and even bands, but this time around it was strictly idols on the first concert night. Headlined by top and up-and-coming Hallyu acts SEVENTEEN, VIXX, Super Junior D&E, Girl’s Day, Cosmic Girls, and SF9, fans filled the Staples Center in Los Angeles on Aug. 19 almost to capacity, ecstatic to see their favorite idols perform. 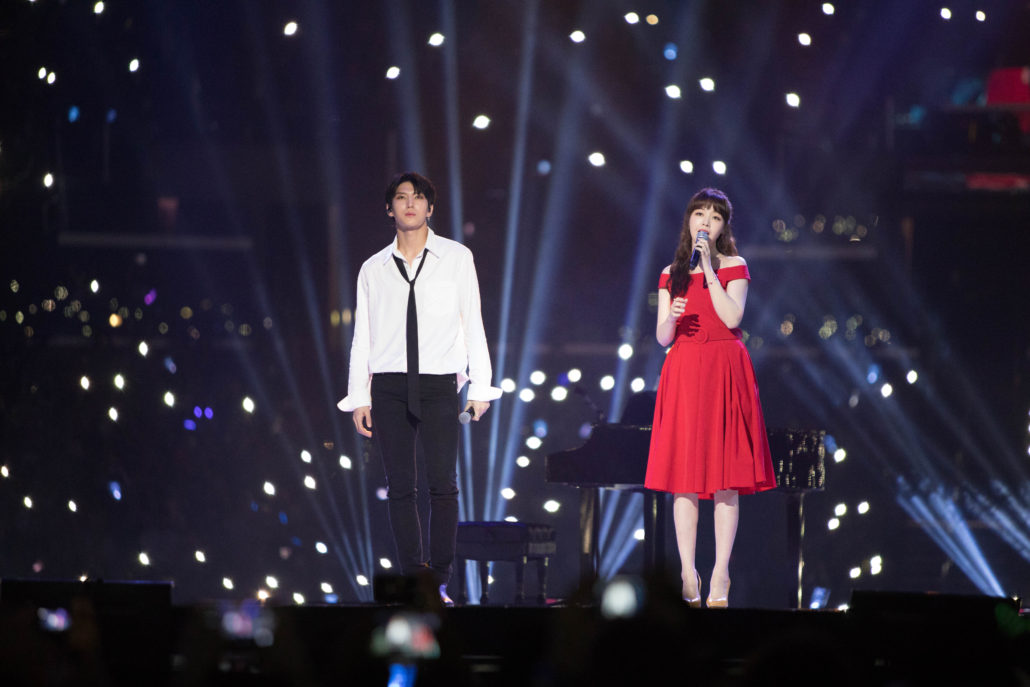 KCON 2017 LA kicked off with an announcement on the Jumbotron telling the audience to light up their phones. Once the Staples turned into sea of bright lights, VIXX’s Leo came up from the platform along with a grand piano. Moments later, Girl’s Day’s Minah joined him for a very appropriate special stage of “City of Stars,” a song from the film La La Land. As the audience learned later, this year’s concept was “KCON Land.”

Chaos soon erupted when SEVENTEEN members Vernon, Joshua, and S. Coups appeared as the night’s MCs, with the first two leading the way in English, followed by the latter in Korean. They introduced the night’s first official performance, the rookie group SF9 who left a lasting impression at KCON 2017 NY just two months ago. 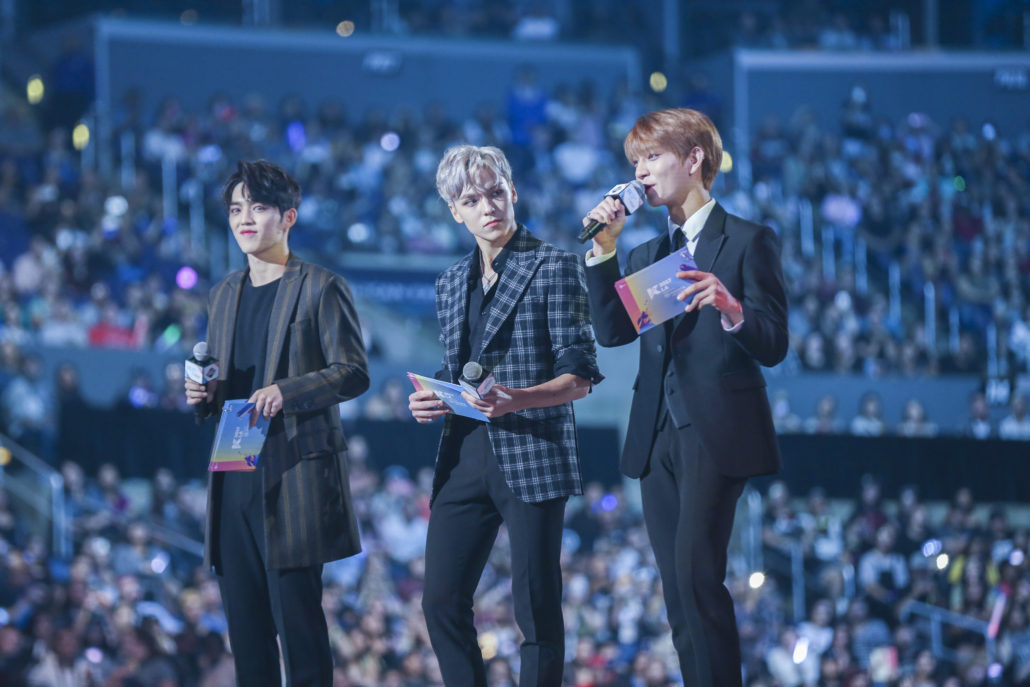 Also on KultScene: The ‘Wild K.A.R.D. Tour’ in São Paulo was as wild & hot as expected

High-fiving the crowd, SF9 came out from one of the entrances into the arena, which lead into their first performance, “Fanfare.” Decked in green suits, the members danced their hearts out to their songs “Jungle Game” and “Easy Love,” which drew the most cheers out of their set. 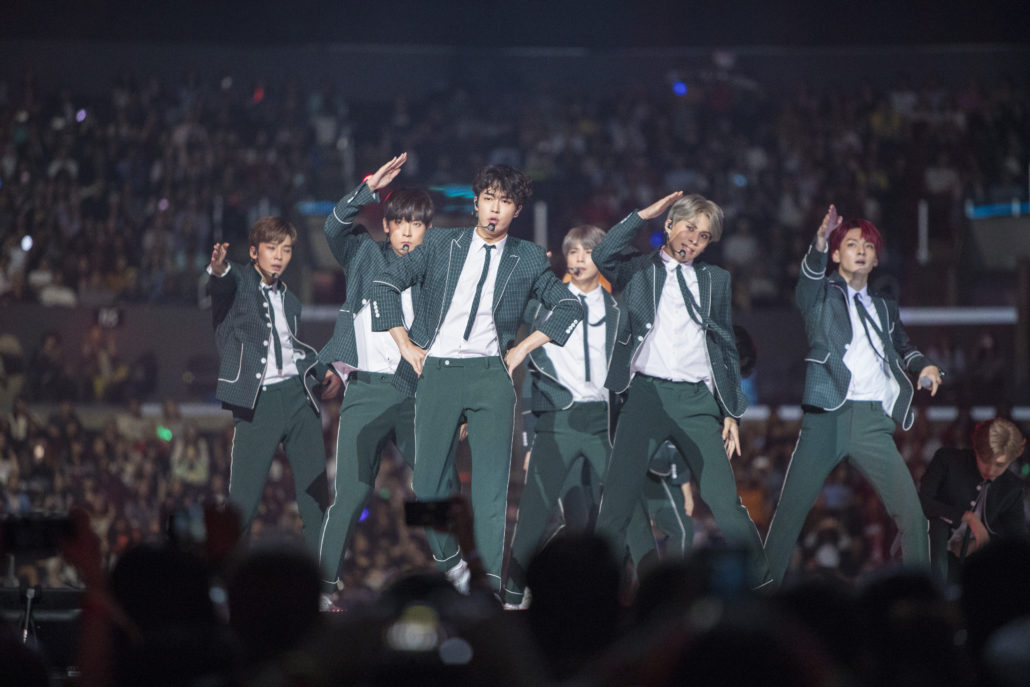 KCON is infamous for its underrepresentation of female acts, but this year, one can argue there was an effort to make up for this by bringing the largest K-pop girl group, the 13-member Cosmic Girls. With a full marching band, the group made a super extra entrance into the arena, waving their pom poms as if they were in a pep rally. This, of course, was the perfect introduction for them, as their first song was the cheerleader-esque “Happy.”

For their introductions, they threw their pom poms aside and were all smiles as they introduced themselves one by one. All of the members, led by Exy, talked to the crowd in English and said it was their first time in LA. But being one of the younger groups, Cosmic Girls’ set was brief, and said their goodbyes with “I Wish” and their twinkly gem “Secret.” 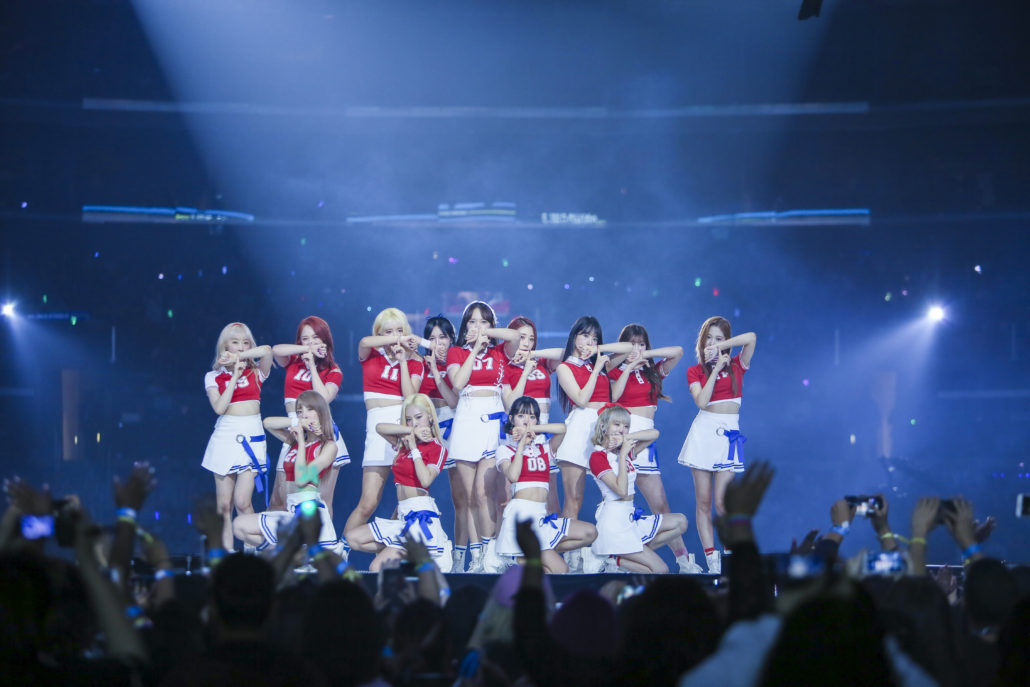 When SEVENTEEN first announced their U.S. tour, many west coast fans felt cheated by the fact that their LA stop was KCON, and hence we would miss out the full show. And while this was inevitable, KCON made up for it a a bit by giving SEVENTEEN their own special stage segment, where their three official units were each able to perform a song. First up was the performance unit with “Swimming Fool,” then the vocalists with the ballad “Habit,” and finally the hip-hop unit with “Check-In.” Though brief, LA carats (SEVENTEEN’s fandom) got a taste of what the band’s solo show would be like, though on a lesser scale.

Next up was the girl group of the night, Girl’s Day. Being a group that doesn’t get to come as often to the States as their fans would want them to, the crowd erupted with their newer songs “I’ll Be Yours” and “Ring My Bell.” However, it was with “Something” what got the entire arena attempting to follow their iconic choreography, evoking the most emotion from the members. 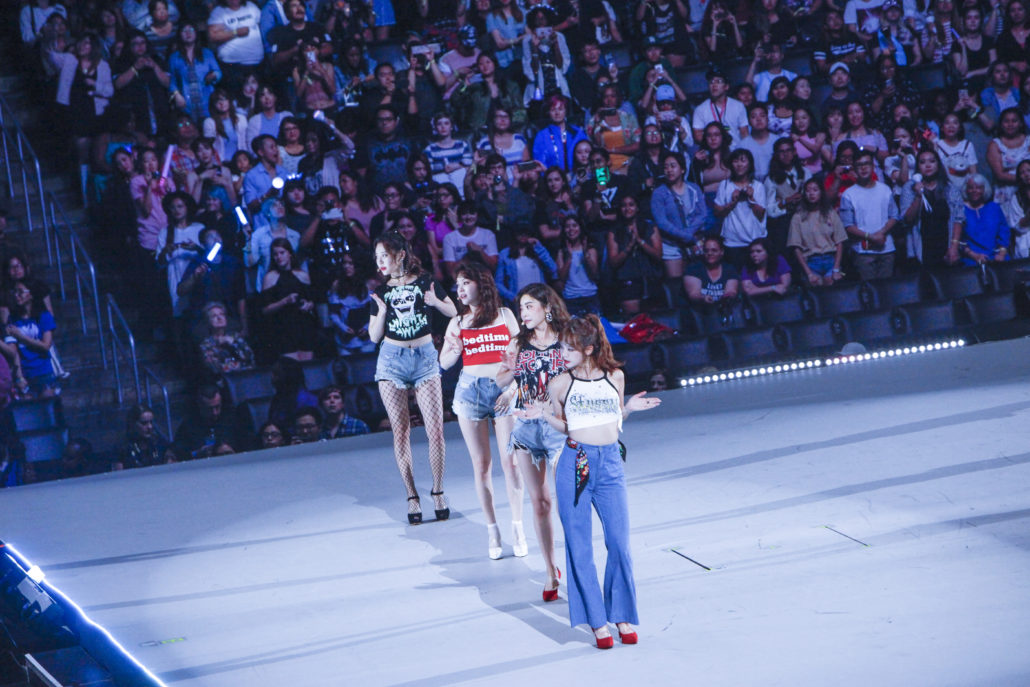 KCON isn’t KCON without special stages, often giving the rookie groups a platform to highlight their skills through them. This year, SF9 and Cosmic Girls paid tribute to K-pop giants and faves Super Junior and BTS by dancing to their songs “Sorry, Sorry” and “Blood Sweat and Tears,” respectively. Since Donghae and Eunhyuk were there to perform as a unit, it would’ve been iconic if they had joined SF9, especially on the dance break of “Sorry Sorry,” but, alas, it did not happen. Those of us KultScene staffers who were in attendance humbly think it was a missed opportunity, but SF9 still killed their performance, and Cosmic Girls joined them towards the end to fill the stage with almost two dozen idols performing the iconic dance moves. 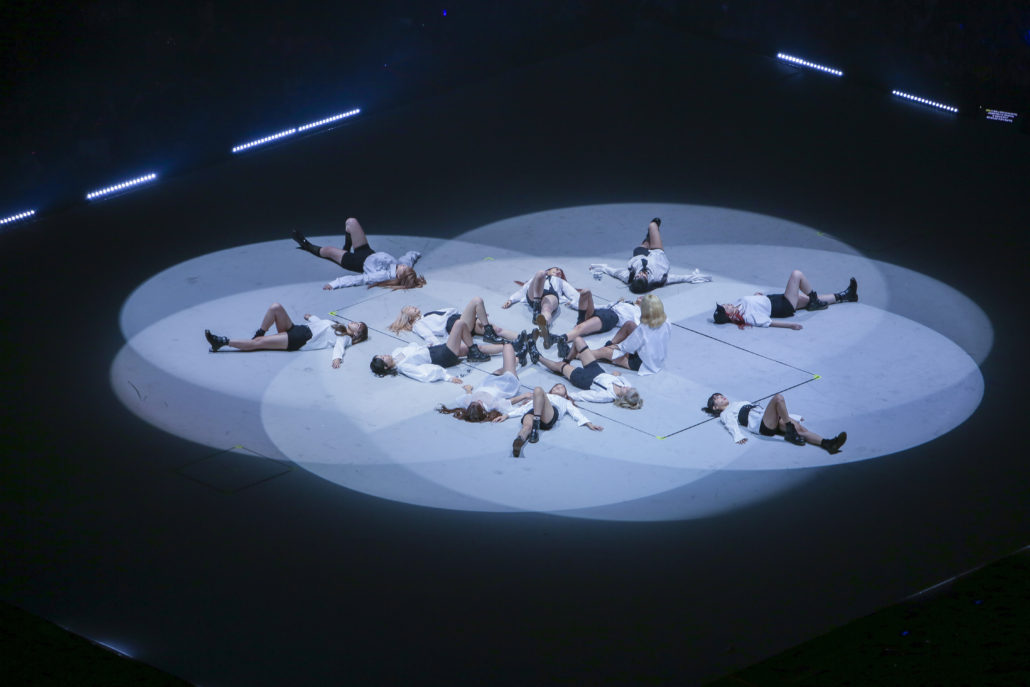 It did, however, make for a good segue (—we guess). Right after this homage, Donghae and Eunhyuk came up from the platform in the middle of the stage and delved right into “Growing Pains.” While not as popular as Super Junior’s songs, D&E performed their unit’s hits like “I Wanna Dance,” “Saturday Night,” and of course, “Oppa Oppa.” They definitely got everyone dancing to the iconic choreography and finished off their set like the kings they are. 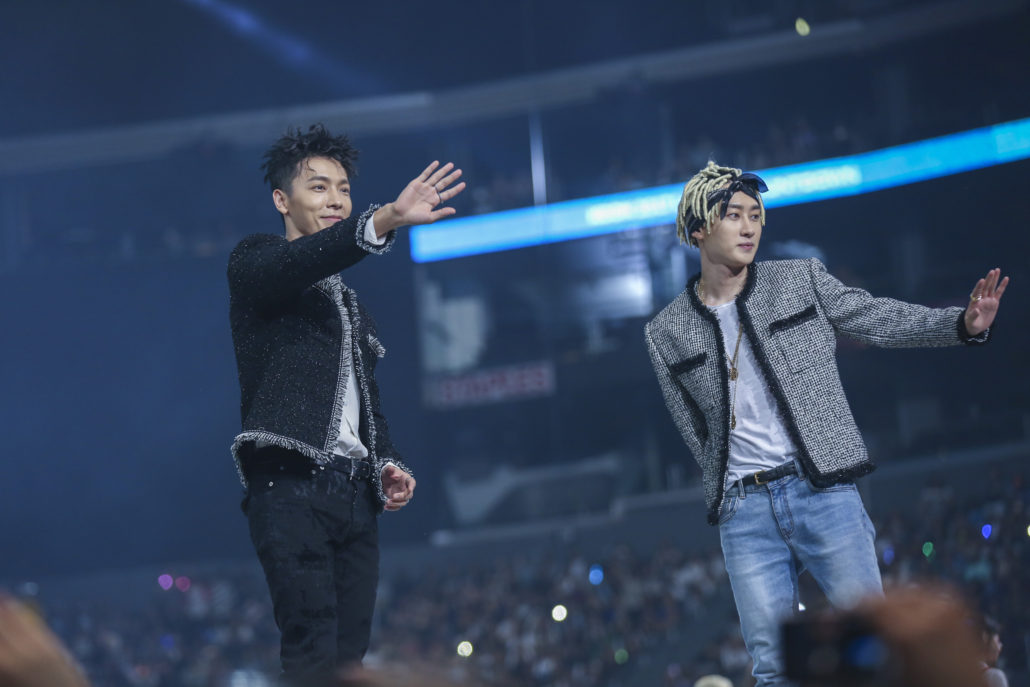 KCON sets are normally determined by seniority, but this year it seemed they rearranged the order to have the groups with the most hype perform last. And KCON regulars VIXX finally, finally, got a slot towards the end of the show instead of being the opening act. Though a brief set, the sextet brought the house down with highly theatrical performances of their songs “Shangri-La,” “Blackout,” and “Fantasy” — which in itself was an overall KCON highlight. VIXX single handedly brought sexy back and put on an amazing show. And like in KCON New York and Mexico, the con brought back the segment “piñata time,” where the VIXX members ended up posing cutely for pictures. 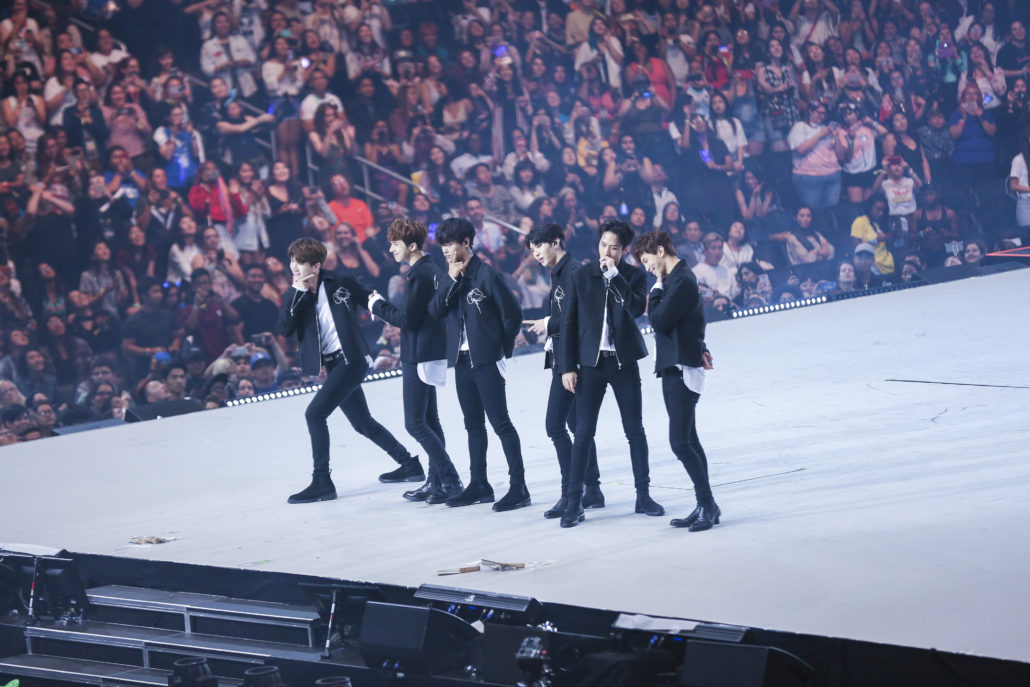 But KCON reached its peak with the highlight of the night: SEVENTEEN. The audience’s expectation was literally palpable, as the Jumbotron displayed a life line and every time it beated, the fans chanted the group’s name. By groups, they started appearing on different parts of the stage, making fans squeal. Just like BTS on last year’s KCON, SEVENTEEN was met by an overwhelming euphoric response. The entire Staples roared at the sight of the 12 members of SEVENTEEN as the started performing their newest single (Hoshi was hospitalized a day prior and didn’t attend KCON).

Known for their intricate yet fun choreographies and always being in sync with one another, SEVENTEEN immediately delved into performing their latest song, the electropop “Don’t Want to Cry.” It’s one thing to see this choreo on your computer screen and another one entirely to witness it live; how they all moved in perfect unison, even when doing the floorwork.

Similarly to their opening special stage, instead of sticking to normal KCON programming and performing only singles, SEVENTEEN followed up with yet another b-side; the high energy dance track “Rock.” As mentioned before, KCON was their LA stop in their U.S. tour, so this set was more about catering to fans than to regular con-goers. And because of this, they too participated in “piñata time.” They went with “random play dance,” briefly dancing to “Uptown Funk” and their debut single “Mansae.” Then, the members shot out T-shirts from cannon guns into the audience, even shooting off some autographed ones. With that, they said goodbye to the fans and went right into their, and the night’s, closing performance, “Very Nice.” 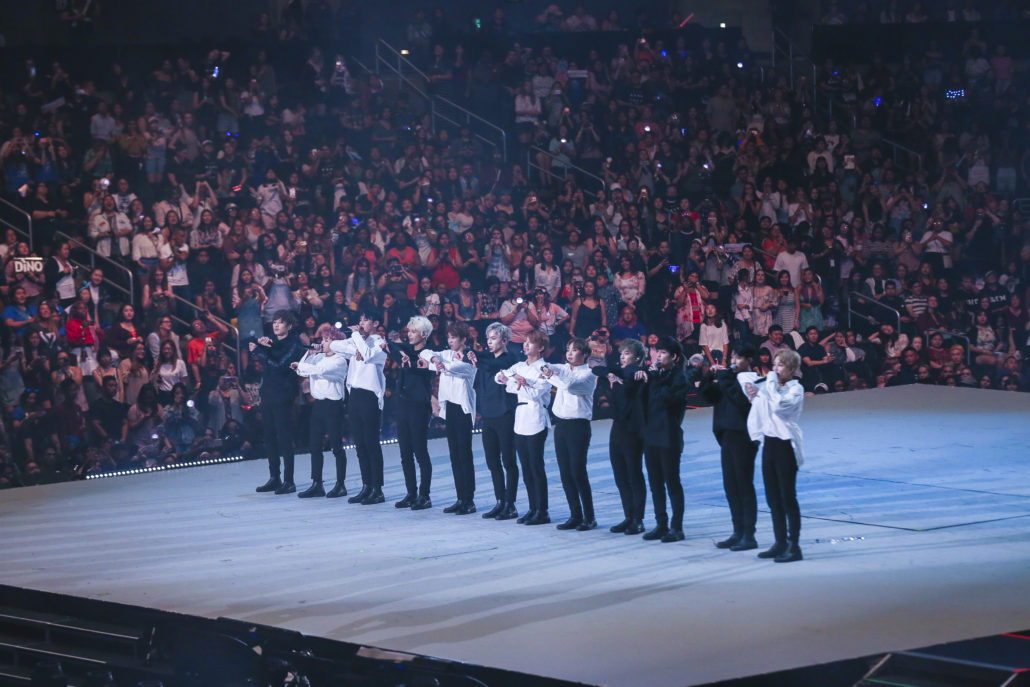 This year, KCON 2017 LA was all about pleasing K-pop fans new and old by offering a diverse pool of idol acts. There was something for the older fans; something for the fanboys; and a lot for the younger fan girls. And it worked. There was not a dull moment throughout the night and it was impossible not to smile ear to ear as all the groups came out during the closing to say goodbye to fans. Most of them holding cameras, they waved at fans and filmed them just as fans were filming the idols.

The first concert night ended on a high, but only left us craving much, much more for the second and final KCON day.