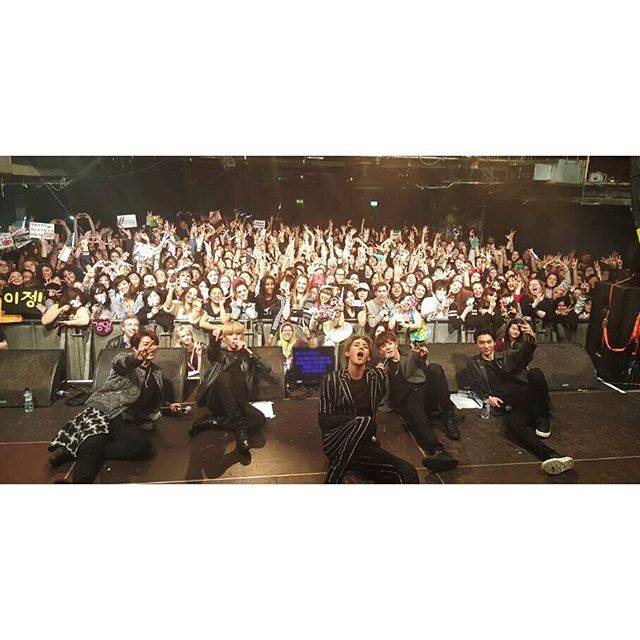 We all know how passionate K-pop aficionados can get about their stars, but when Korean boyband HISTORY came to London on Sunday, February 21 the enthusiasm of the fans bordered on hysteria. By 11 that morning, a humored crowd had assembled outside the O2 Academy Islington and were singing the band’s hits, as well as signing a huge Union Jack flag to present to the members of HISTORY.

The venue opened its doors at 5 p.m. and the diehard fans, officially acknowledged by History and their management as Storia, filled the 800 capacity hall in no time. With the show scheduled to start at 6 p.m., the audience sang, chanted, and waved fluorescent green glow sticks in feverish anticipation of seeing their favorite K-pop idols. Several well-crafted fan banners were also seen in the crowd and were so large that the band couldn’t possibly fail to spot them.

The roof very nearly lifted off the venue when the members of HISTORY first appeared on stage, and the guys looked bemused and delighted in equal measure by their rapturous reception. Immaculately dressed in black brocade jackets, black trousers, and casual shoes, the band opened with “Dreamer,” their debut song from 2013. HISTORY immediately wowed the crowd with their harmonious vocals and slick choreography, making full use of the entire stage area to showcase their dance skills.

The concert consisted of HISTORY performing songs from their Korean discography along with the addition of their most recent Japanese single, “Lost.” Songs like “Torn Apart,” a melancholic acoustic ballad, “Tomorrow,” an upbeat song with a Latin/Swing vibe, and “Nobody Nowhere,” a mid-tempo number featuring prominent Spanish guitars, really stood out throughout the course of the night.

Do Kyun’s solo stage was noticeably the only point in the show when the noise from the crowd subsided, and during his heartfelt ballad you could have heard a pin drop. He enthralled the fans with his powerhouse vocals, which seemed incongruous with his shy and quiet persona, and received rousing cheers and applause for his efforts.

“What Am I To You” followed the ballad with its infectious, upbeat Latin rhythms and was a real crowd pleaser. The song perfectly showcased HISTORY swaggering dance moves and flawless synchronicity; it had the audience singing along and screaming loudly throughout the entire performance.

Also on KultScene: EXO Made The Audience Feel Like One At EXO’luXion New York

Between songs, HISTORY maintained a high level of interaction with the audience and entertained everyone with some hilarious comments, relayed in English by a female translator. Jae Ho remarked that he found the girls in the UK very pretty and was immediately ribbed by leader Kyungil, who told him: “You will say the same thing in Paris!” Tongue firmly in cheek, Kyungil also informed us that in Korea Jae Ho was dubbed quite the Casanova.

The crowd went wild anytime Kyungil displayed his brotherly affection for youngest member Yi Jeong, prompting the pair to play up to this with good humor by hugging and kissing each other on the cheek. Jae Ho also elicited a similarly enthusiastic response, when he said that it was HISTORY’s first time in London and he wanted anyone who saw them sightseeing in the city to come up and say hello.

Predictably, “Psycho” drew some of the loudest screams of the night, with its erotically charged choreography and menacing vocals, during which Kyungil teased the audience by giving the impression he would perform the infamous hair pulling move on Yi Jeong earlier than expected and brought the house down when he eventually performed the movements of the group’s iconic dance. Si Hyoung then told us that HISTORY would perform a track exclusively for the London audience from their upcoming album, but drew a loud laugh when he swore us all to secrecy before the group performed the mystery track. Yi Jeong mesmerized the concert goers with his fantastic vocal range and sensitive solo, which was promptly followed up by two performances comprising of smaller units of HISTORY, the former featuring Jae Ho and Do Kyun and the latter Yi Jeong, Kyungil and Si Hyoung.

HISTORY broke for a question and answer session towards the end of the concert, during which Jae Ho tried, unsuccessfully, to quiet the crowd. Consequently, it wasn’t always possible to hear the questions and answers relayed by the translator, but there were some standout moments. For example, when Kyungil was asked by one female fan: “Why are you so handsome?” she was visibly shaken when he fixed her with a smoldering gaze and responded flirtatiously: “Why are you so cute?”

Si Hyoung was given a rousing cheer when he told us that HISTORY had come to give the audience energy, but the band had actually drawn more energy themselves from our enthusiastic support. It was during this time that the guys sat down on the stage and instructed their Korean staff members to take photographs of them with the entire audience as a backdrop.

The boys subsequently performed the highly anticipated and notoriously raunchy “Might Just Die” to the obvious delight of the assembled Storia. The routine’s most suggestive dance moves provoked the biggest uproar of the night and left the fans loudly chanting HISTORY’s name in the hope they would return for encores. In a show full of strenuous and demanding choreography, the boys returned to perform both Yi Jeong’s composition “Ghost” and their second Korean single “Tell Me Love” with their boundless energy and enthusiasm still intact. Just as well, because HISTORY had a meet and greet event scheduled immediately afterwards!

At the end of such a memorable evening, the crowd was understandably reluctant and sad at the prospect of having to bid farewell to the band and many dedicated fans were still waiting around outside the venue at 9 p.m., hoping to see HISTORY’s final departure after a night full of memories.

Moreover, KultScene had the opportunity of interviewing HISTORY, so be sure to check back for that in the next couple of days!

What do you think of HISTORY’s show? Did you attend any of the European stops on HISTORY’s tour? Share your experiences and thoughts and what you’re wrongly hearing in K-pop songs in the comment section below and be sure to subscribe to the site and follow us on Facebook, Twitter, Instagram, and Tumblr to keep up with all of our posts.