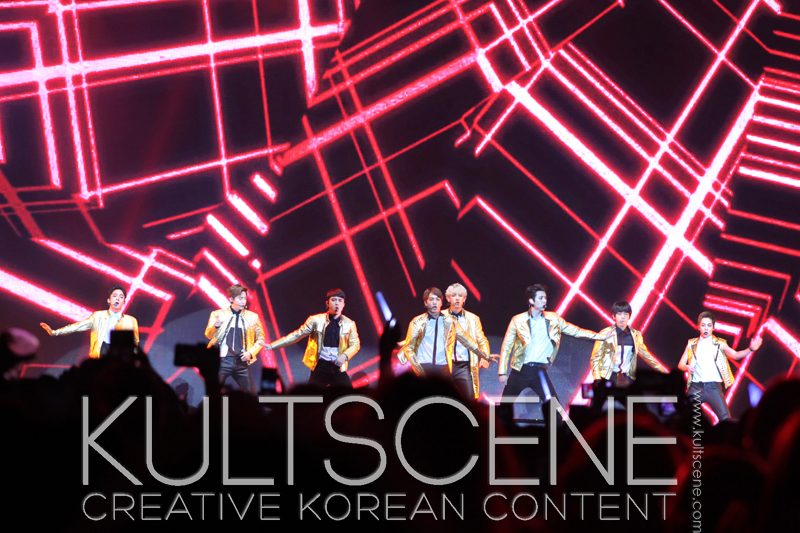 EXO’s first ever North American tour came to an end on Sunday night at the Prudential Center in Newark, New Jersey. But while the performance was the fifth and final stop of the North American leg of EXO PLANET EXO PLANET #2 – The EXO’luXion, it felt like the start of something new for many in the crowd. With EXO and their East Coast fans coming together for the first time ever, the night was one filled with euphoria as the audience and artists built a bond through the night.

Amidst an outpouring love from EXO-L’s (EXO’s official fanclub), the energy was intense as EXO took the stage. Even prior to the start of the show, the excitement was palpable as fans screamed every time a picture of their favorite EXO member flashed on screen, with the loudest cries dedicated to MIA member Lay who is resting from an injury from a television shoot in China.

The Prudential Center filled up near maximum capacity with a white ocean of fans waving official lightsticks, chanting along to EXO’s songs playing prior to the concert. The show kicked off with a video highlighting the mythology of EXO’s members being extraterrestrial beings with supernatural powers, hyping the audience up for the energy EXO was about to showcase. 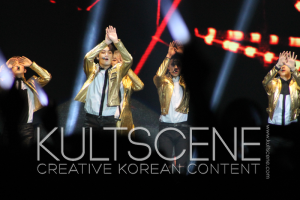 Throughout the next few hours, EXO showed the audience what made them worthy of that place in the Korean music scene. Despite the language barrier, EXO and EXO-L’s alike understood one another through shared passion as soon as EXO took to the stage. Beginning with “Overdose,” decked out in gold form fitting jackets, EXO performed the powerful dance track as fans let loose their frantic cries of adoration. The song, the group’s final single before several member departures, had been reworked artfully to accommodate the eight present members. While there were fewer members on stage than the dance initially called for, there was no lack amongst EXO’s introductory performance.

After the bombast of “Overdose,” EXO launched into two early songs, pre-debut track “History” and their debut song “MAMA.” Reigniting nostalgia for EXO’s early days, “History” and “MAMA” acted as a gateway into a journey through the group’s repertoire. The performances of older songs so early in the night set the tone for the rest of the concert, as the members reassured fans that they will continue to live up to the group’s slogan to always be there: “We are one.” 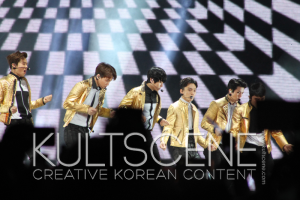 Following the three intro songs, EXO’s members took to the center of the stage and introduced themselves to the audience to their New York-New Jersey audiences for the first time. Giddy with excitement, the members showed off a bit by singing their names and a short rendition of “Empire State of Mind.” Several members spoke in English, with leader Suho taking on much of the MCing throughout the evening. 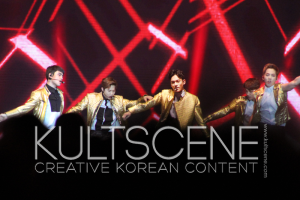 However, one recurring issue relating to EXO’s popularity and their intense fan base came to light. The introduction ended with one of multiple request by the group to the crowd in the standing area, with the members leading a chant of “One step back” as EXO urged fans to allow for breathing room and safe conditions amidst the pit. While security was ample and doing what it could, throughout the night, numerous fans in the standing area fainted and were injured in the struggle to get closer to EXO. Aware of their influence, the members raised awareness to the situation numerous times throughout the night, urging the fans to take care of one another to ensure that everyone was able to enjoy the performance in a safe manner.

EXO went into a series of their B-sides that showcased the group’s wide-range of skills, beginning with an interpretive dance-driven rendition of “Don’t Go (Butterfly Girl),” that showcased the group’s softer side as Chen was able to display his belting powers for the first time that evening. After breaking up into pairs to perform the sensual song “Playboy,” EXO followed up by the emotional ballad “Baby Don’t Cry,” which featured a dance routine featuring Kai and Sehun. After the dancers were joined by the rest of EXO, it was time for the first performance without the majority of the members, as D.O., Baekhyun, and Suho performed “My Answer.” Even though there were cases of overusing backing tracking throughout the night in order to ensure more perfect performances, the group’s talented vocalists didn’t disappoint throughout the night. While D.O and Baekhyun are two of the best singers in EXO, leader Suho surprised the audience by holding his own alongside the vocal giants. Despite a minor crack during a solo, Suho more than exceeded expectations. 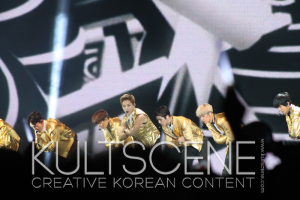 EXO displayed a wide range of musical styles that best proved to the American crowd what the K-pop act had to offer. Newer songs like the jazzy “Exodus” and the seductive power track “Hurt” got the crowd riled up, while sweeter songs like “Peter Pan,” “XOXO,” and “3.6.5” had the audience swaying in their seats singing along to the music before hundreds of eyes watched as EXO changed on stage between stage outfits, hidden only by white paper, during “Lucky.”

After the stream of songs, EXO’s members once again spoke to the audience, this time relaying their experiences exploring New York City. A casual comment about visiting the Disney Store in Time Square and Chanyeol expressing his love of Elsa, which led to EXO singing bits and pieces of the “Frozen” soundtrack. While it didn’t appear pre-rehearsed, the “Frozen” reference segued into EXO performing several out-of-season Christmas themed songs from their special winter albums, ending with the highlight of EXO’s most skilled vocalists – Chen, D.O., and Baekhyun- coming together to perform “Miracles in December.” Coming three months after the holiday, the theme seemed out of date, but fans ate up the concept and the elf-outfits.

EXO continuously made efforts to interact with their foreign fans as the night carried on, continuously joking around and playfully joking with the audience. Following the Christmas-themed portion, Xiumin and Chanyeol came out to teach a responsive Korean chant to the English-speaking audience. Even though many people in the crowd had no idea what they were saying, it was clear that by the time EXO performed the pump up song “Drop That” that the language barrier didn’t keep everyone from understanding their passion.

The highlight of the night was easily their hit song, “Growl,” as the audience jumped on EXO’s most well known song and took the opportunity to join in, singing along. Even though “Growl” is EXO’s most popular song to date, the group kept it fresh and exciting by putting their all into the performance. Following it up with their newest songs “Love Me Right” and “Call Me Baby,” EXO ended the concert with the bright, upbeat attitude of their new songs as they said farewell to the East Coast audience and promised that they will get through all future hardships thanks to the love and support of their fans. 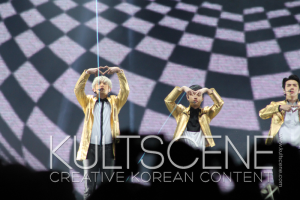 “It’s been a healing moment for all of us,” said Xiumin about the concert. “You guys are really so hot, so perfect, so beautiful, so lovely.”

“We will come back for a happier time,” Baekhyun promised.

“I feel like we finally became one through our music show,” added Suho. “Don’t forget today. I will not ever forget today forever.”

But no K-pop concert is ever really finished the first time around, and EXO came back on stage to perform two songs released at the end of last year, “Sing For You” and “Unfair.” As if an extension of their earlier promises, the group displayed their tenderness and love for their fans through the ballad “Sing For You.” They then brought the evening to a close with the upbeat, final song of the evening, “Unfair,” as the members played with confetti and stuffed animals fans were throwing onto stage as gifts. 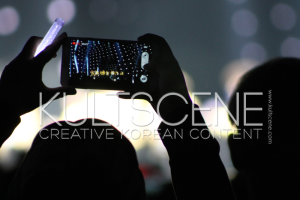 As EXO left the stage for the final time, there was a sense of sadness from the crowd that the evening had come to an end, but also the utter happiness at being able to see the popular K-pop act in person and the knowledge that they were one of the many people to share in something special with EXO that night. 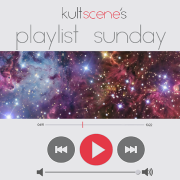