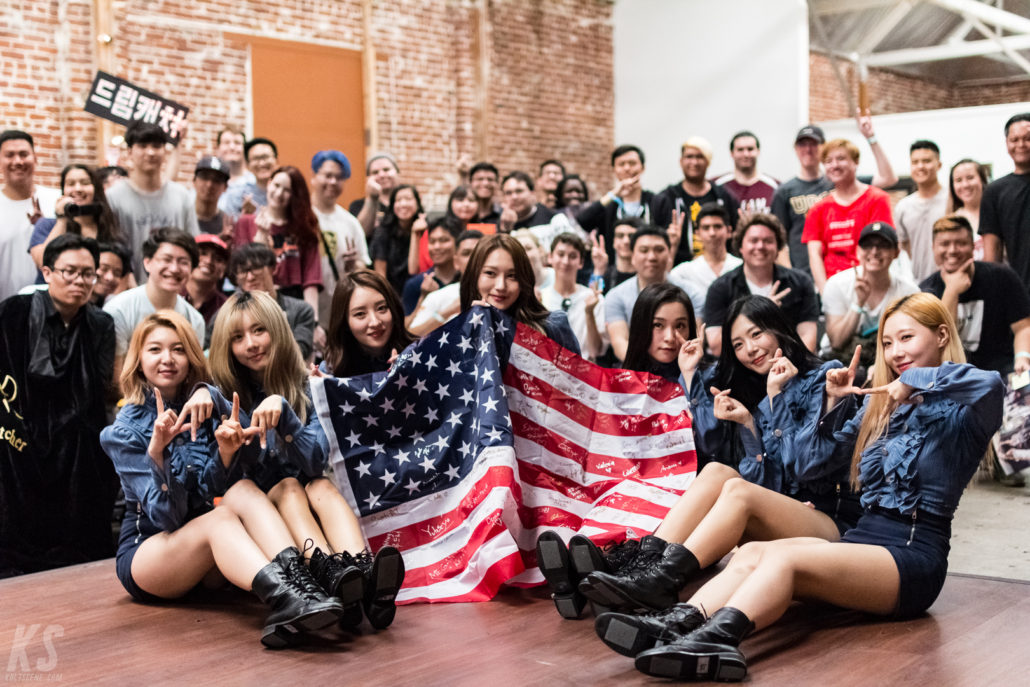 Freshly debuted, the K-pop-rock girl group Dreamcatcher was a bold choice to play this year’s KCON in Los Angeles. Formed by Happyface Entertainment, Dreamcatcher had never performed in the States prior to the event, but were welcomed with open arms by fans as soon as they stepped foot in LAX. Most of the featured female artists (except fromis_9) have years of experience under their belt, having debuted long before the group. Not to mention, Dreamcatcher’s distinct sound is different from the usually expected guests of KCON. Fortunately, the group, composed of members Gahyeon, SuA, Siyeon, JiU, Dami, Yoohyeon, and Handong, are already loved internationally. The members completed a European tour early in the year, as well as a South American one in late July, so it was no surprise when a fanmeet emerged right before KCON. 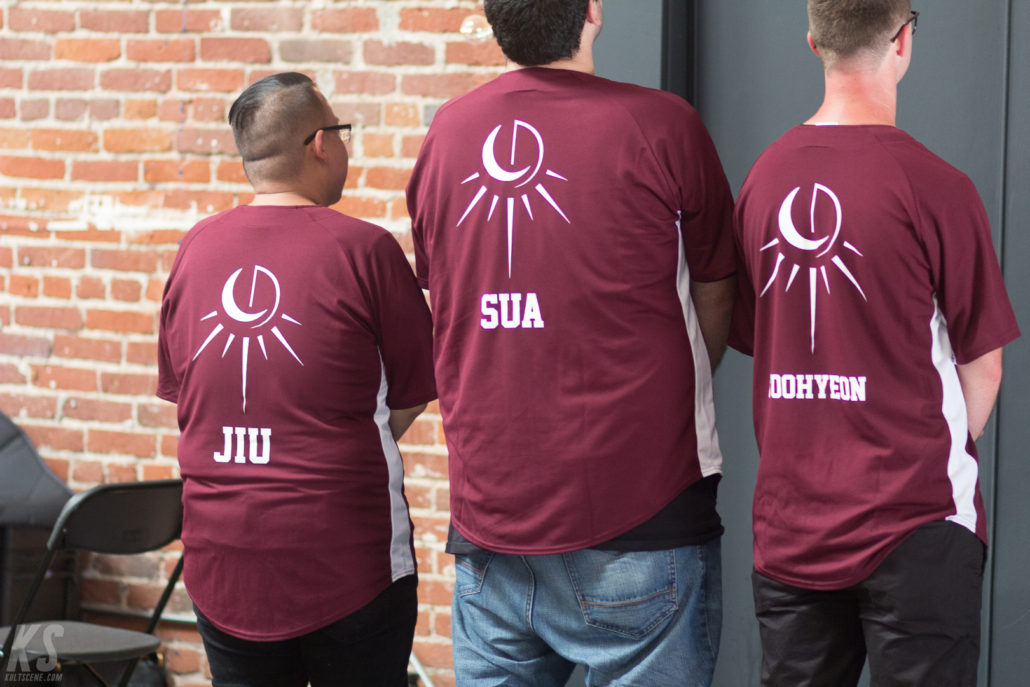 Almost immediately after they arrived in the city of angels, the group held their very first U.S. fanmeet on Aug. 10th, organized by their stateside based fansite 7 DREAMERS. As it was planned by the group’s fans and not a tried-and-true production company, many fans were skeptical as to how it would turn out. However, the event proved to be a good choice for Dreamcatcher, as tickets for all spots sold out within two minutes. 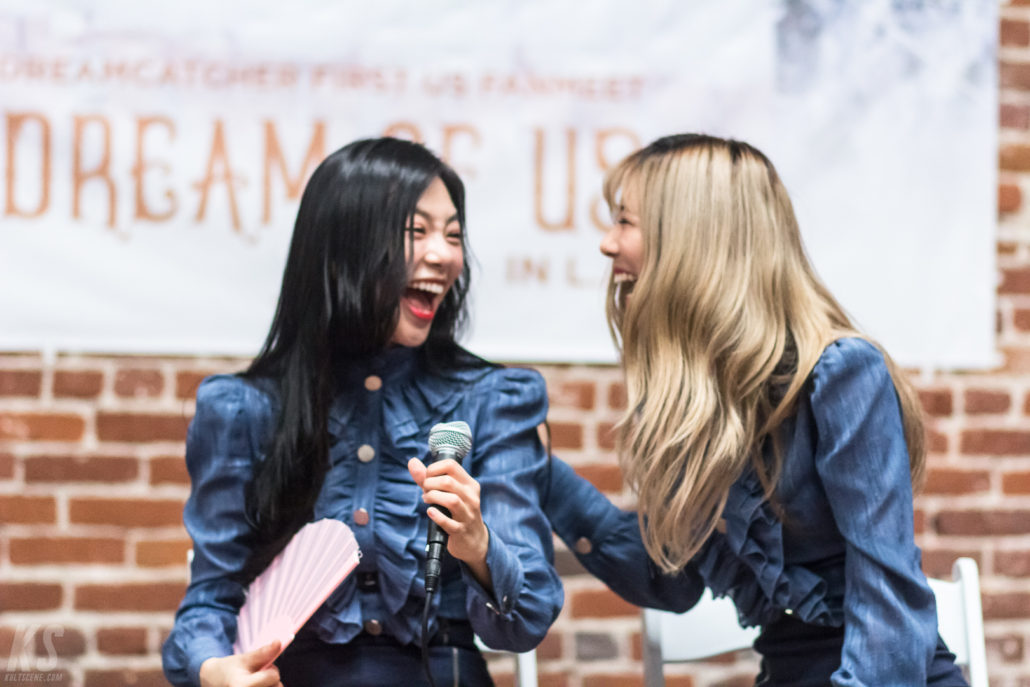 KultScene had the opportunity to attend Dreamcatcher’s fanmeet at A-List Music in Downtown Los Angeles, where we got to talk to the seven women about their first trip to the U.S., hopes for the future, and career so far.

Dreamcatcher are fulfilling a niche that hasn’t been explored by other female K-pop groups before with your rock-oriented, guitar heavy music. Who inspires you all musically, whether within K-pop or otherwise? 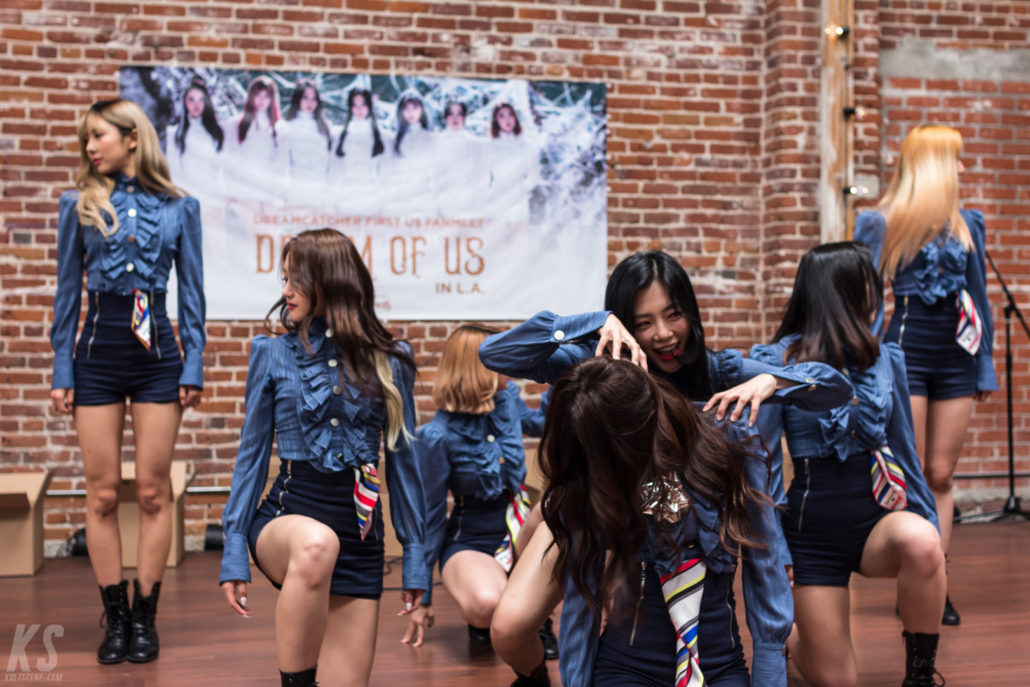 You all have achieved a lot of chart success here in the U.S., including ranking number five on the Billboard World Albums chart and the top spot on the iTunes KPop Albums chart with your mini album Prequel. You clearly have a large fan base here. Is it shocking to see that?

Gahyeon: “We are so happy to be able to have fans from all over the world and in the US as well. While we’ve been in LA, we were approached by fans while taking photos—”

Gahyeon: “—and we were so surprised that these fans knew who we were. We asked them if they knew us as Dreamcatcher and it was shocking when they said that they were fans.” 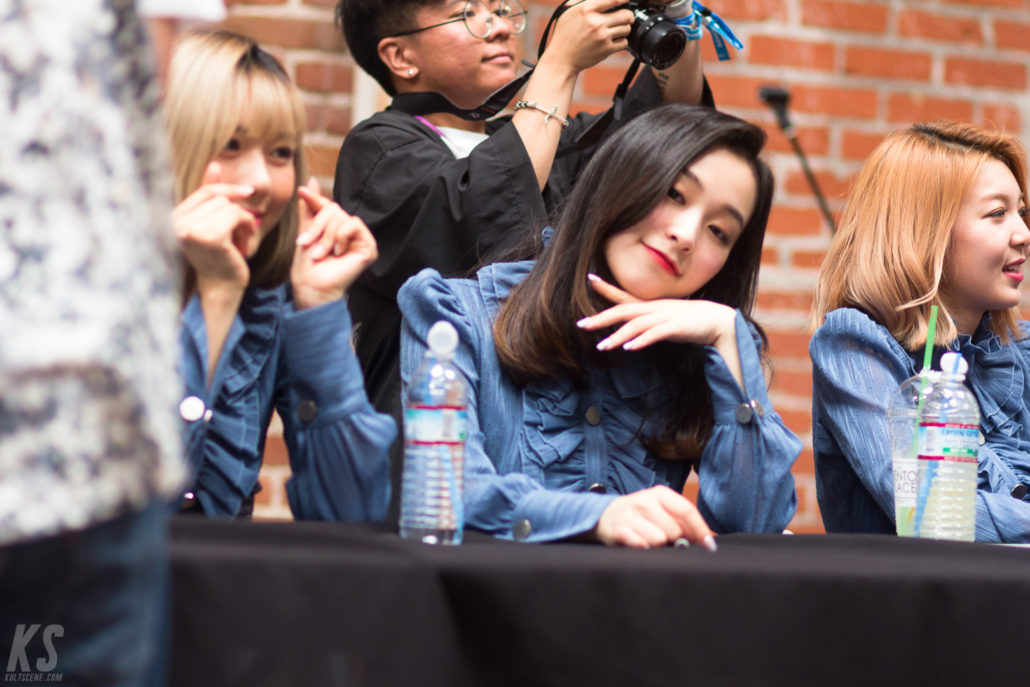 Your album sales have doubled in Korea, with Escape the Era selling over 20,000 copies, which is very impressive for a rookie group. It seems like your fanbase is growing very quickly. Did you all ever think that would happen?

JiU: “We’re so thankful for our success so far. We don’t feel as if our fanbase in particular is growing, but we can tell that people enjoy our concept because of our album sales growth, and we’re really proud of that.” 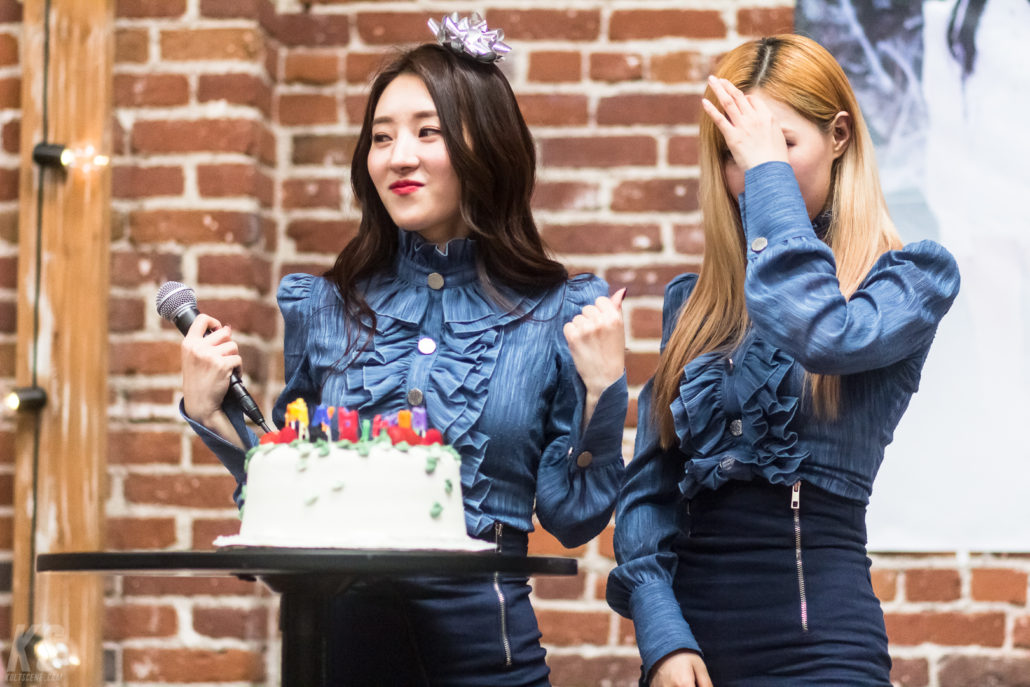 Dreamcatcher have been known to cover a lot of different songs by different groups, and you’ve become very popular with fans of the original artist. How do you all choose what to cover?

Dami, your magic trick in “You & I” went viral on a lot of websites internationally, including on Twitter and Reddit. It introduced many people to Dreamcatcher. Do you have anything to say to new fans that discovered Dreamcatcher because of that video?

Dami: “First of all, thank you for all the love and support of my trick in ‘You & I.’ I’ve seen people try to imitate it. Please use plastic instead of steel while practicing the trick!” 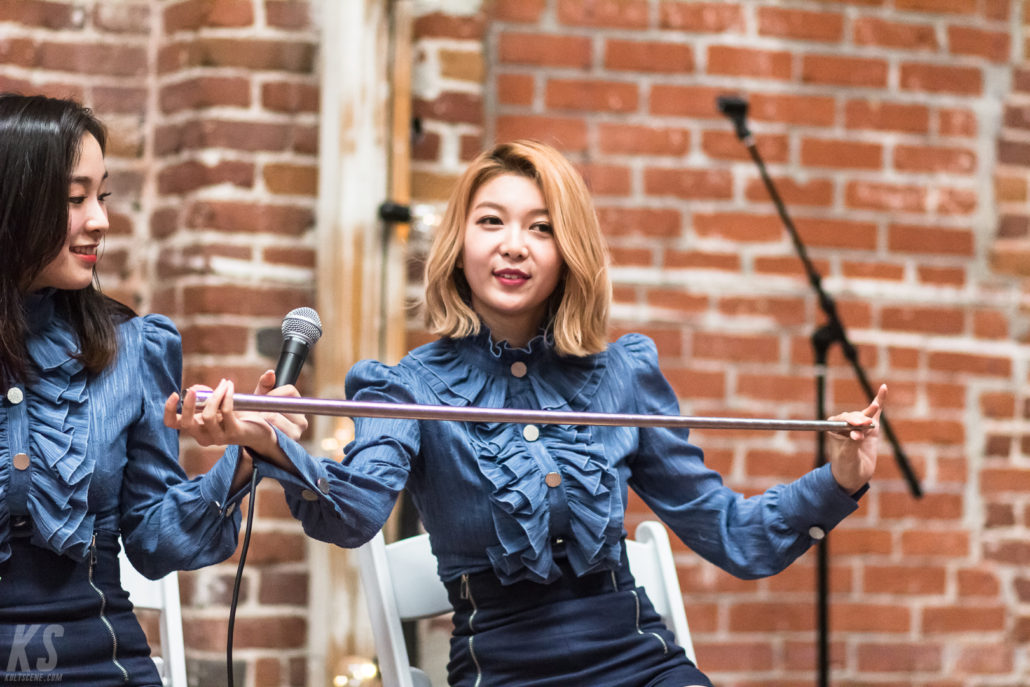 If you all could switch positions within Dreamcatcher, what would you choose?

(All say ‘Ahhhh’ in a thinking tone)

Siyeon: “I really like rapper’s parts, so that would be interesting to try.”

SuA: “I would like to switch with Handong because she speaks Chinese and it’s really hard.” 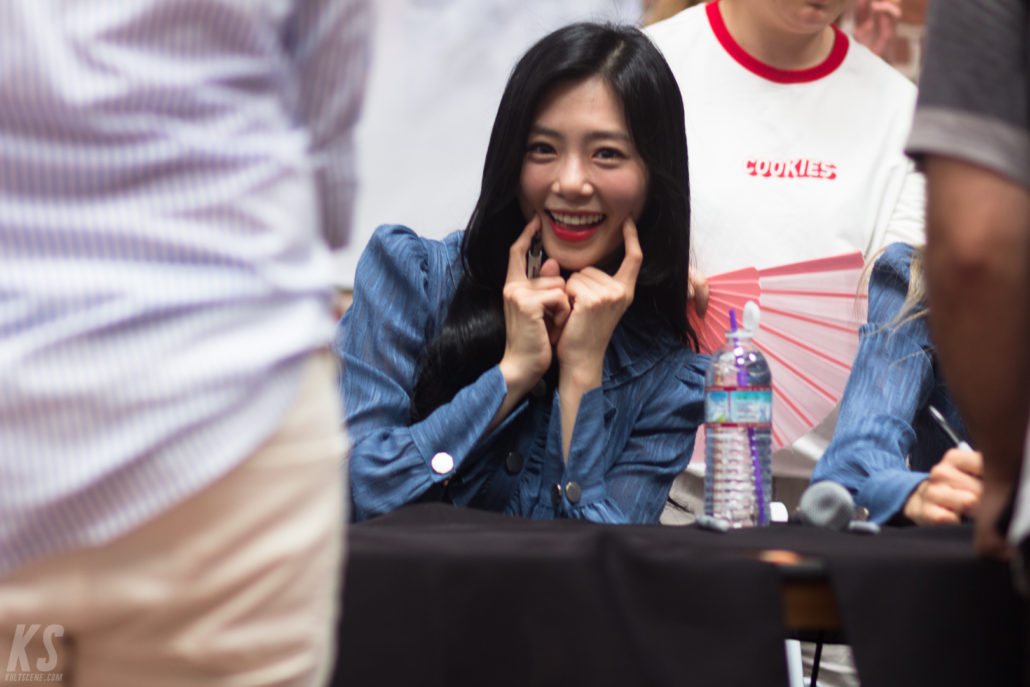 Circling back to growing, it has been a year and seven months since your debut as Dreamcatcher. What have been the most memorable moments of your career so far? Are there any things you all have yet to achieve that you’d like to?

Handong: “Our nomination for first place at a music show.” [All members nod in agreement]

Siyeon: “We really could physically witness the love from InSomnia when we were nominated.”

Yoohyeon: “Because there are many international fans, we noticed that the votes grow a lot at night, which is interesting.”

SuA: “One day we hope to achieve number 1 on all charts in Korea (All-Kill).” 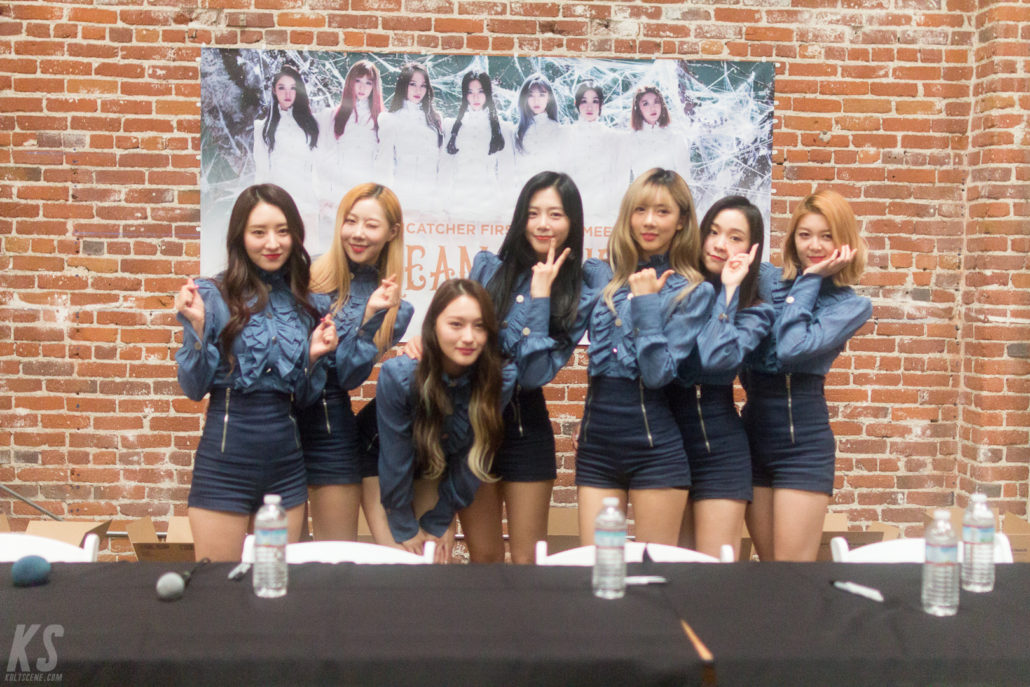 * Interview was facilitated by a translator.

Check out the rest of the pictures here: 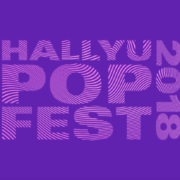