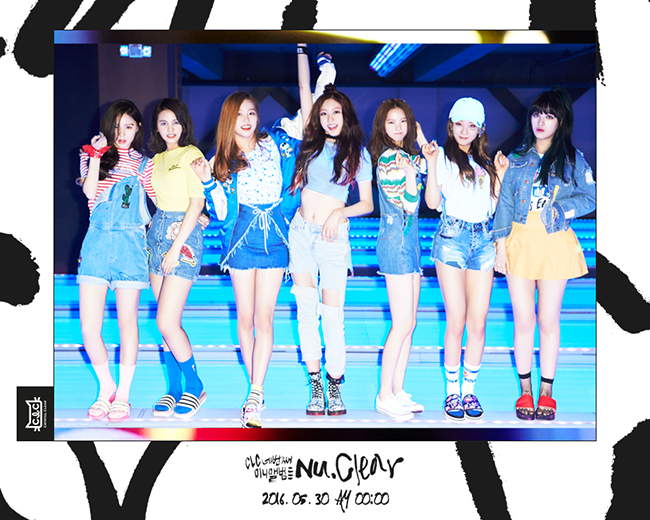 That is one great title. Nuclear by itself would be good enough but combining “new” and their name (a shortened version of “crystal clear”), CLC have created another classic K-pop portmanteau, ”Nu.Clear.” This release is a new start for CLC because it’s their first since adding former “Produce 101” contestant Kwon Eunbin to their lineup. It also represents a good shot at them making it big as the “Produce 101” craze has not entirely died down. But Cube Entertainment groups have been in decline recently, and CLC never did garner much of a fanbase to add to by now. Whether or not they break out this year, we can be sure they deserve it.

“Nu.Clear” explodes (get it?) into life right from the opening with ‘90s hip-hop beats, record scratches, and bombastic horns. Written and produced by frequent Cube collaborators Son Youngjin and Jo Sungho (4minute’s “Cold Rain,” BtoB’s “It’s Okay), “What Planet Are You From?” doesn’t stray too far from retro pastiche and is energized by the girls’ fantastic vocals. One of the things CLC do better than a lot of other girl groups is their group singing. I don’t know if it’s just good production or they were always planned to be like this but in nearly all of their choruses you can hear a number of distinct voices rather than one being layered. It works especially well on a ‘90s throwback like this. I also love the high-pitched synth that the girls harmonize with in the verses; it transitions the song effortlessly.

CLC continue with the horns and bubblegum pop on lead single “No Oh Oh” but with a more modern twist than the album opener. It bears the hallmarks of producer Shinsadong Tiger’s work (most recently popularized by EXID), horns, male voices in the background, big vocal choruses, and a healthy disdain for men. “No Oh Oh” is about a girl who knows she’s too young for men’s creepy approaches to them but has to continually say no to the stranger danger. This repetition is mirrored nicely in the refrain of “ani ani aniya” (“no, no, no” in Korean) and in the weird delays that come halfway through the verses. These are the highlights as they suggest a chorus or pre-chorus is about to begin but the song continues on with the verse, shutting down any possible change of heart from the girls. Again, I love how parts of the music harmonize with their voices and this time it’s the electric guitar, which adds a more youthful touch than synths in the previous song. While not as structurally interesting as EXID songs, all of these elements work just as well for CLC to create something more coherent and immediately satisfying.

“1, 2, 3” is CLC’s effort to jump on the GFriend innocent bandwagon. The use of theremin, the 808s, and delay in the chorus all recall GFriend’s own aping of Girls’ Generation. Here though it is dialled up a notch with a lot more elements making GFriend seem like tired old ladies. It begins by slowing the album down with some harp, apparently bringing us (sadly) to the ballad portion of the album already. But it was not to be. The song crashes back into life only seconds later with its chorus of rolling synths and pop beats. Written and produced by singer Lee Sang Chul, Seo EBum, and BPM, “1, 2, 3” does not rest from there and is a great example of fitting someone else’s style into your own. The song is so busy but moves at such a fast pace you don’t have time to be confused. Synths, pianos, and drums jump off each other creating the kinetic energy that keeps the song at this speed. The buoyant vocals shine alongside it, highlighting a key point of this album, vocals and music working in great harmony.

Unfortunately, Nu.Clear does move onto the ballad portion, or just slowed down portion, with “Day by Day.” Again Son Youngjin is on production duties this time with the help of more Cube regulars Ferdy and Big Sancho. More of an acoustic slow jam than a ballad, “Day by Day” isn’t the worst of its kind but comes unwanted in this otherwise bright album. I’m not of the belief that mini-albums like this need to be paced in the same way as full length albums. Give me all the bubblegum pop I can take. That chorus would fit right into any Disney musical so will be likeable to a lot of listeners. Like on all of the tracks, I really like Yeeun’s rap. Her childish and cheeky delivery is always fun and brings CLC’s music to life.

The more sentimental, subdued tracks continue with “Dear My Friend.” I didn’t find any translated lyrics for it but I bet it’s one of those sappy songs about how much CLC love their fans or each other or something cheesy like that. At least this one is musically a bit more interesting than “Day by Day.” Jo Sungho and Ferdy return for the production to give the verses some edge with plodding synths. The chorus is weak though and reminds me of a charity song from the 80s, which reminds me of songs I never want to listen to twice.

Were CLC trying to give us every variation of the boring album track on this album. Nu.Clear started so brightly but slowly faded into disappointment. Ferdy (I’m starting to dislike this person) produces solo this time on “Before,” the most ballady out of the last three songs. I think the thing I hate most about ballads like this is the guitar that strums the same three chords over and over in the chorus. It does make me like the two previous songs a little more though, and I am thankful again for the raps.

Nu.Clear weaves together a number of great sounds that perfectly complement a rookie girl group. Like Oh My Girl, CLC exude the youthful exuberance of teenage girls and never try to go beyond their means. The first half reflects this with three blistering tracks of pure joy while the second slows things down for a mellower time. The first half is considerably better in my mind but the slower tracks don’t ruin the experience totally. It is their best release by far since their debut with “Pepe” so hopefully will spell a time of good fortune for them.