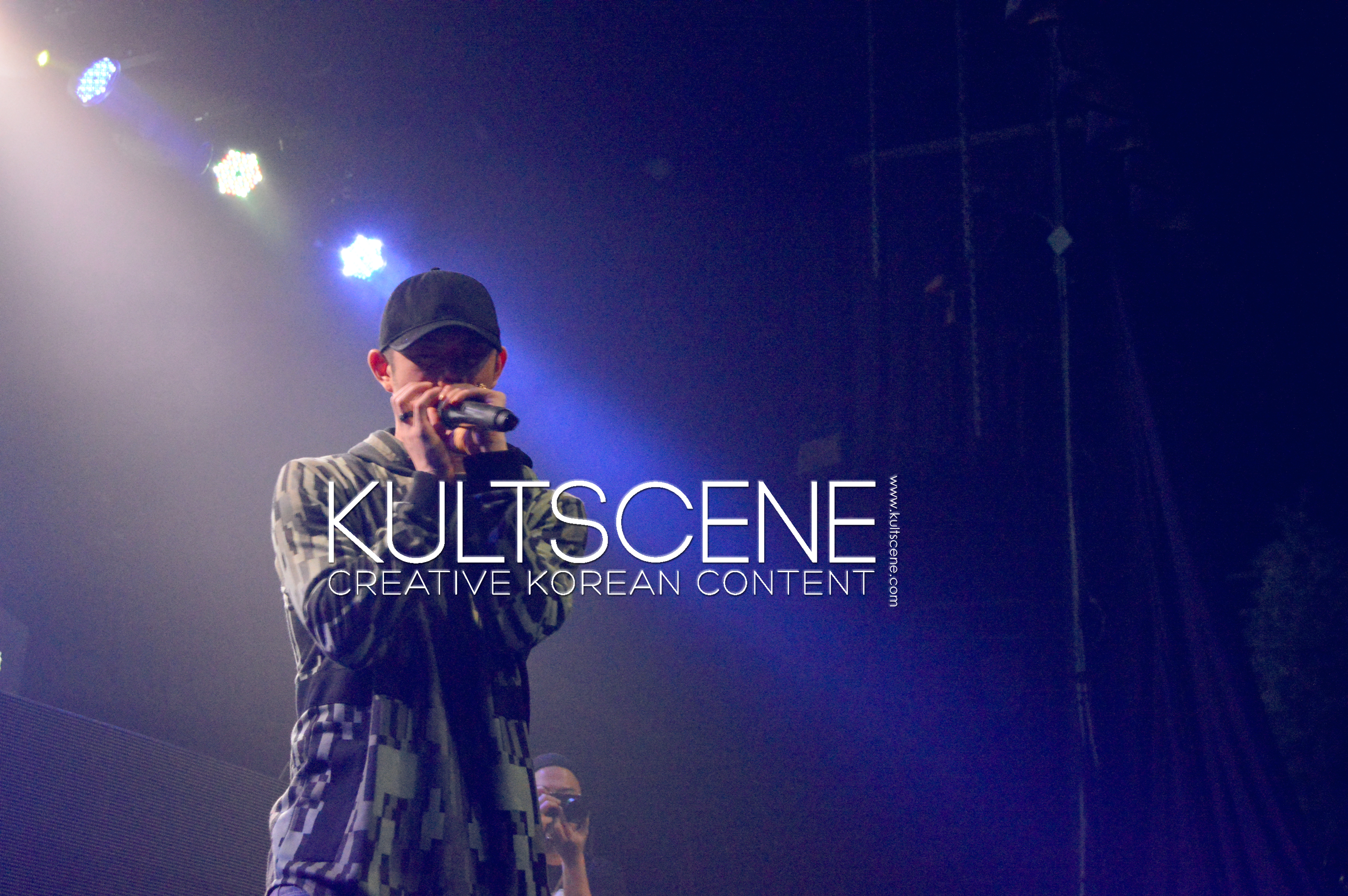 Boston was the fourth and also the second to last stop on Beenzino’s five city North American Tour sponsored by CHL Entertainment and PlatinumKShows. December 11 marked the first time that a non-American Korean hip hop artist was performing not only at Royale but Boston in general and, boy oh boy, were the expectations high! As a fellow Bostonian, I can’t begin to tell you how long this crowd has waited for a show like this to hit town, and to have Beenzino be the first was an absolute honor.

Not that I ever doubted Beenzino’s ability to work the crowd, but damn does this guy know how to get his audience hyped. He has this artistic aroma that naturally fills the air, on and off the stage, which the crowd feeds off of. There was nothing that could’ve prepared us for what was to come; starting from the few seconds before he hit the stage whilst teasing the audience with his deep voice peeping through the dark shadows from the side of the stage, to that very second that the beat dropped as he came out leaping and started with “Jackson Pollock D*Ck“ as his opening number. It didn’t take much before the crowd lost their minds; it honestly really only took a simple subtle “hey Boston” before the room ruptured into a frenzy. That’s how you know it’s going to be one hell of a show if all the artist has to do is crack a “hey” into the microphone which then causes automatic madness.

He went hard the instant he stepped foot on that stage, with a drink in his hand, already gleaming with that “Asian glow.” I thought Beenzino was going to start off slow and ease the crowd in with his set but nope, Zino meant business and absolutely wanted to waste no time whatsoever. With ShimmyTwice as the DJ, the Jazzyfact duo were pulling out all the stops and took us back in time with oldies like their very own “A Tribe Called Jazzyfact,” “각자의 새벽(Each One’s Dawn),” “Slow Down,” “Summer Madness,” “Boogie On & On,” “Mitch As F*Ck,” including his featuring tracks “Nike Shoes,” “I Get Lifted,” “Welcome To The Show,” and “The Color.” Among the crowd favorites were “How Do I Look?,” “Up All Night,” “Break,” and his latest single “We Are Going To.”

The energy was nonstop and was always at an all time high. Beenzino fed off of the crowd, which was clearly well received considering he put in 200 percent throughout the two-hour and some extra minutes show. Zino was way more interactive (in both Korean and English) with the crowd than I had expected; he told us about all the good food he had eaten since being in town and the sheer look of excitement that was on his face as he talked about his first trip to Dave & Buster’s was incredibly cute for this 28-year-old. He also made a quick shout out to his friends that came along for support while being on tour and to his girlfriend, Stephanie, who was watching the show from the second floor. As he was saying that the crowd all looked to the right, zoomed in and focused on her, to which Beenzino exclaimed “No, don’t do that… It’s kinda weird. Focus on me okay, focus on me, focus on me. It’s my night.” At that moment he looked like a sad puppy that just had his chew toy taken away from him. Ah, what a cutie. A majority of the crowd were rowdy fan boys, to which he responded along to quite playfully with, at one point even telling one of the guys that kept screaming things at Zino every time he started to talk, that “he needs help.”

Although about 80 percent of the audience was Korean, Beenzino made sure to make that extra effort to crank out all the English that he knows, even in moments where he struggled to translate transitional words from Korean to English, as he chuckled in semi embarrassment. But the fan interactions didn’t stop there, as he continued to smile and respond to those who shouted random and funny things at him. The utter shock on Beenzino’s face when a male fan told him to take off his shirt could leave one gasping for air from laughter due to the response that he gave “No man, I’m not taking off my shirt! Why would you say that? You’re not a girl!” But then he pulled his printed Givenchy hoody, quickly exposing his belly button; pure hilarity that Zino. While in transition for his next stage, he asked some fans in the front row what their favorite song of his was and a few people responded with “Break” and with a mischievous smile he said he hates that song and continued asking for songs until someone said “Aquaman,” which then ended up being the song he was waiting to play. 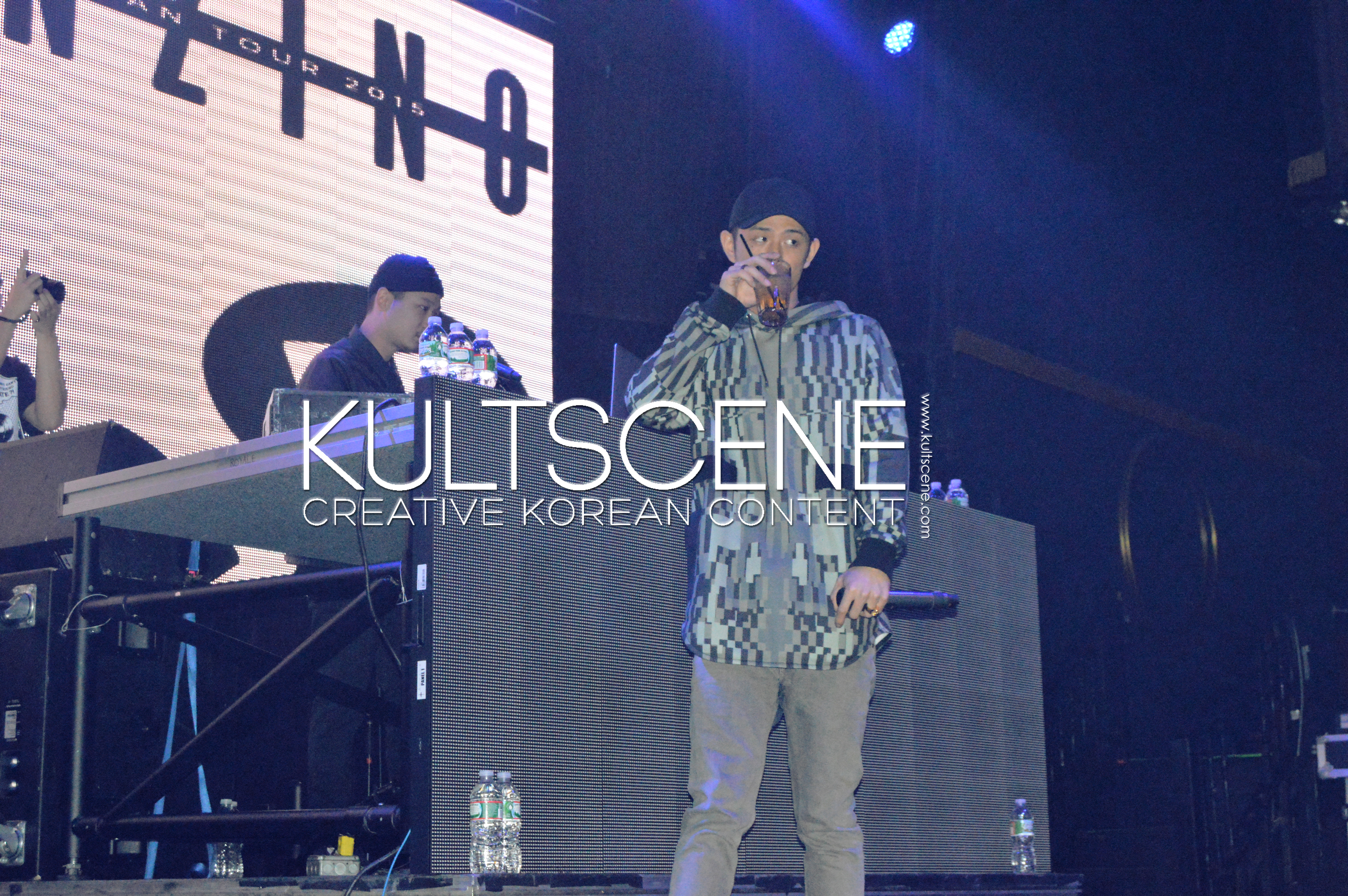 Even though he’s a rapper, Beenzino has a light, unique tone and flow that gets people in a natural high and leaves them afloat on cloud nine. Everyone is well aware that rappers don’t dance. Instead, they jive to the beat and express their emotions by using their hands with the occasional heavy swaying motions of the feet. Of course Zino is no exception to this fact, but from the way that he moves on stage, everything from his shoulders swaying side to side and back and forth, to those slight hip movements, I’m sure this guy can truly break it down on the dance floor if he really wanted to. He never stood still. If he wasn’t jamming out in the four feet radius from of DJ ShimmyTwice’s booth, he was running back and forth from the left to the right side, then right back to the middle, and repeat.

I’d be lying if I said that I didn’t go into this show with the anticipation of two songs, “Dali, Van, Picasso” and ‘If I Die Tomorrow,” and when that moment came –when those two songs came on– a sudden rush of emotions attacked all my heartstrings and all feelings became absolutely uncontrollable. Beenzino puts feelings into all his songs, but these two in particular seem to hit a certain spot in the listeners’ hearts; they’re a bit rawer, a bit more sentimental. That goes to show that just because someone is a rapper doesn’t necessarily mean that they can’t lay down a heartfelt track or two.

The show was coming to a close, but just because it was ending didn’t mean that Beenzino was going to let the energy die down. He looked like he never wanted to leave that stage, but what artist really wants to leave when that’s something that they enjoy doing? Beenzino didn’t let us down though, as he ended the night with a banging encore that consisted of a string of snippets that included “Illionaire Gang 2,” “Profile,” “YGGR,” “Born Hater,” “So What?,” “Always Awake,” and an even livelier “Boogie On & On.” Zino also took the time to announce that he’s putting the final touches on his new album, and I absolutely cannot wait to hear what he has planned for us.

What’s so impressive about hip-hop shows is the all-around simplicity that it brings. There’s no need for the insane amount of light work and blinding beamers that pop concerts usually have. Why add all those things when it’ll only take away from the artist, especially if only one person is performing? Beenzino owned this show; every millisecond of it, but it was even better because he had the great help of his other Jazzyfact half, DJ ShimmyTwice

Check out the rest of the pictures from the Boston show: 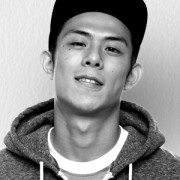