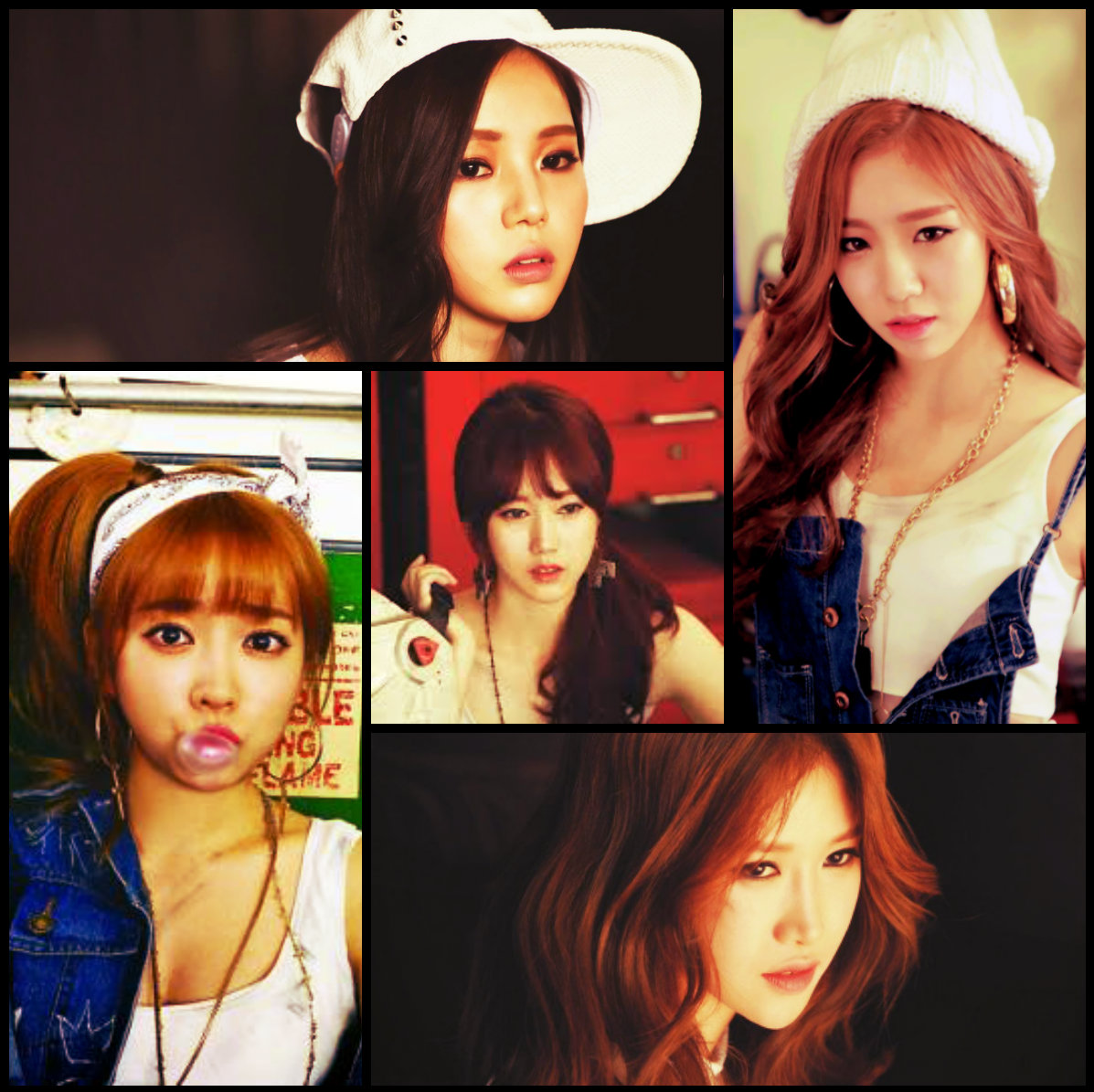 The little known girl group Blady made a recent comeback with a truly crazy song. While many of you may not be aware of them, they have in fact been around since 2011. With a slight possibility of making it big with this comeback, we decided to take a look back at their career in the hopes of discovering a hidden gem.

The K-pop industry has changed a lot in the last three to four years. Most notably, there have been a lot more groups debuting every week. This is positive in some ways, such as the fact that the three big companies no longer have complete control of the charts. We can now see rookie groups from smaller companies, like EXID and VIXX, competing and winning on music shows. But this also means that a lot more groups are being forgotten without making any sort of mark. Whether it is because of a lack of exposure or from having no good music, more groups are disbanding within a year of their debut than ever before. Some, however, keep plugging away despite no success at all.

Blady is one of these.

What sets Blady apart from all other struggling K-pop groups is a certain try hard charm. They’ve been around longer than most rookie groups who have tried and failed to make it big. Since 2011, they have had four major releases and have changed their lineup on three separate occasions. The concepts and quality of their songs have varied wildly yet they deliver each with an exuberance that is too endearing to ignore. From the sexy, Latin inspired ‘‘Come To Me’’ to the Hollywood directed music video for ‘‘Crazy Day,’’ there is a lot to take note of with Blady.

Finding the reason for Blady’s continued lack of success probably isn’t that hard once you listen to their debut single ‘‘Spark Spark’’. I always think that groups can never really recover from a terrible opener (I still think ‘Gossip Girl’ is the reason Rainbow has always struggled). ‘Spark Spark’ is a truly awful slice of what K-pop was like prior to Wonder Girls’ ‘‘Nobody’’. Blady’s company were obviously too poor to afford modern equipment so it sounds three years out of date and not in a hip, nostalgic way either. It contains grating synths covered with auto tuned vocals. I can’t tell if they’re attempting to make the voices ‘cuter’ or cover up poor vocals. Either way, it is incredibly annoying and brings back awful memories of K-pop’s auto-tune years. Also, it doesn’t even have a video.

Cut to July 2011, and Blady began teasing their blockbuster follow up, ‘‘Crazy Day’’. Blady were going global. To the ultra glamorous Maldives to be exact, where they would shoot their new music video with Hollywood director Kang Young Man in spectacular 3D! They even recruited choreographer Main Spirit, who has worked with Lee Hyori and Bada, for the dance moves. The hype was real.

The dramatic acting! The paparazzi flash effects! The image overlays! The lack of 3D!

In all seriousness, it is actually a big step up from their debut. Even just for actually having a music video that can be found online. The song’s Europop production is an improvement. Structurally, it’s a mess, but that gives it some level of interest over ‘‘Spark Spark’’.

That’s being kind to a music video and song that are so embarrassingly bad and yet seemingly a lot of effort was put in that it becomes iconic rather than shameful. A 3D version was supposed to be released in August of that year but is nowhere to be found. Some of the shots in this one look like they were made for 3D though, so maybe this was it but they just didn’t shoot in 3D at all. The choreography too does not look like it was put together by anyone of note much less someone who worked with a great queen like Lee Hyori. At least they got a holiday out of it.

All of this did not seem to go noticed though, as Blady went under the radar for two years. They resurfaced in 2013 with a whole new look and lineup. All of the original members but one, Kangyoon, left and were replaced with four more girls. They came back armed with fresh talent to create a new day in Blady history. For the first time ever, they would release a good song.

Not just a good song, a great one. Released in November of 2013, ‘‘Blood Type B Girl’’ is an encapsulation of all that is K-pop. It contains three distinct genres and swaps out whole parts at a whim with some never getting another run. It seems a group with a track record like Blady’s could never pull this off but somehow they do. It’s pulled together with heavy hip-hop beats then moves onto shiny electro pop on the chorus before finishing on some dirty electro dance beats. On top of all this, there are tribal sounding 808 drums that come in at random points to liven things up. They go all out with the structure while never allowing the music get out of control. Each part is distinct yet cohesive as a whole. It also still felt like a Blady song. Sort of a mess but an endearing one that they now learned how to control.

The new Blady age had been ushered in. Their millions of adoring fans were surely around the corner.

Unfortunately, they were nowhere to be found. Just like their previous singles ‘‘Blood Type B Girl’’ failed to chart. Shortly after, four more members left, including only surviving founding member Kangyoon. It seemed like their time was up. Not only had they lost the majority of their group, but without any original members, there was a possibility of the essence of the group being lost. Even with new members they probably couldn’t break into any sort of popularity. Surely this was the end.

Obviously nobody told that to Blady.

This brings us up to March of this year, when Blady came back once again this time with a sexy, revamped lineup and the aptly titled mini album ‘‘Renovation’’. Taking on the sexy concept is something most girl groups do to gain any sort of following so I don’t really blame Blady for pandering. Also, the whole concept is geared towards sexy including the video, music and lyrics. A lot of the time we see only sexy visuals so it’s refreshing when groups commit to it.

Stunning lead single ‘‘Come To Me’’ is their most straightforward song to date. It fuses swing and Latin pop to great effect with the guitars and orchestra combining perfectly. It’s also Blady’s first song to sound like it was put together with a proper budget. How their company could afford is beyond me, but they did it and that’s what matters.

A part of me is disappointed that Blady are starting to work with trends in order to boost their profile. In the end though, it’s the quality of music that matter and in that respect they have not disappointed. They are continuing right now with insane ‘‘Renovation’’ b-side ‘‘Oochie Walla Walla’’.

So far they have only promoted it on weekly music shows so there is no music video. It would be a shame if one doesn’t turn up eventually since it’s such a great song. Going for the popular banging electro trap now Blady have taken cues from EXID, 4minute, and 2NE1 for their next attempt at stardom. “Oochie Walla Walla” bursts into life at a blistering pace leaving no time for you to settle down. It contains so many beat and tone shifts so even when it slows down it never gets boring. Where ‘‘Blood Type B Girl’’ worked because it took its time with changing elements, “Oochie Walla Walla” works because it does it so quick. That sounds like a contradiction but you have to listen to understand. It’s ridiculous, but it works.

Blady is an example of what a group can do if they refuse to quit. With their most recent comeback, they seem to have gotten a little more attention than usual (one variety show appearance). Whether it does bring them any success, we’ll have to wait and see. No matter what happens though, Blady has had an incredible career that deserves some attention. When so many groups come and go within a year it’s good to take notice of some of these smaller ones who never quit. This quality is what makes Baldy stand out for me. Despite some of the worst atrocities against music and music videos, they remained tenacious and enthusiastic. Whatever happens I feel like I can rely on Blady to remain true to themselves and keep on reaching for the stars.

G.Soul Wants You to Stop Running From Love
Scroll to top
×
Loading Comments...