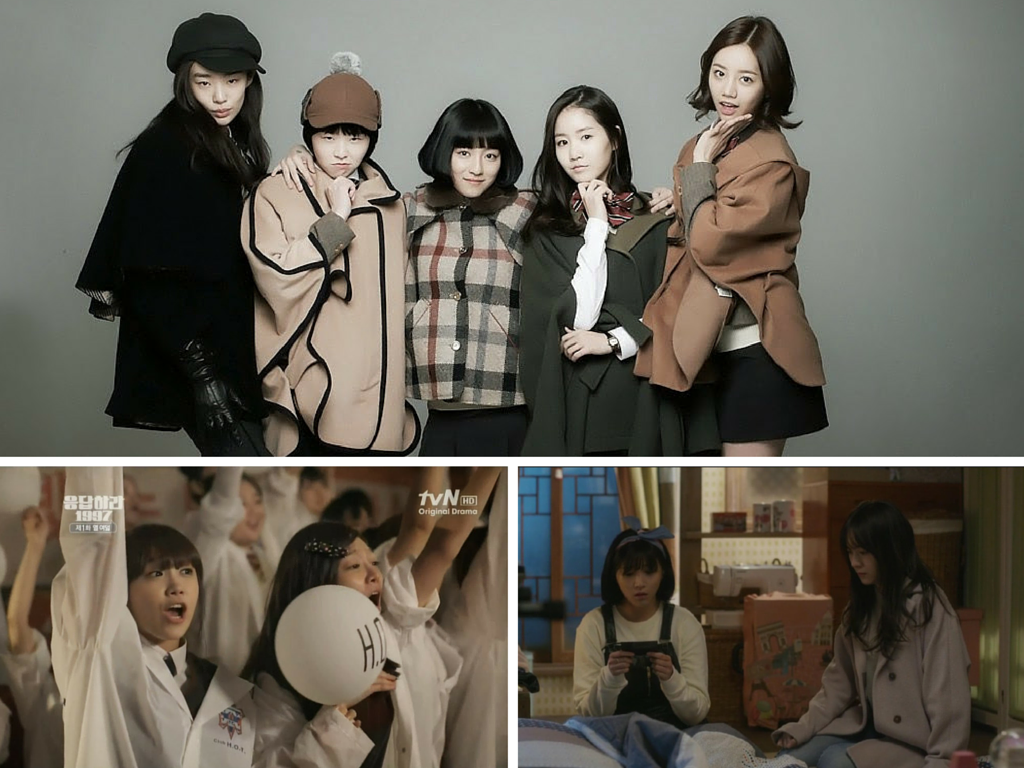 Let’s do an experiment. Go on your search engine of choice and look for “K-drama friendships.” What comes up? A bunch of articles on our favorite bromances and ships. But with most of the K-drama fans being women, why are we always emphasizing the guys’ friendships? When I watch a drama, I can never relate to two boys having skinship. Sure, I fall into the thirst trap and I find it cute and all that, but that is it. However, when one female character comes through for her girl, that hits home. And yet, the guys get all the attention.

K-dramas are predictable when it comes to women and friendship. We either have the mean girl who wants the leading guy for herself or the sidekick who gets minimal screen time. So when new dramas with well written, round female characters and the friendships between them come out, I celebrate. I mean, it’s 2015, who wants to see more girl hate?

That’s why I’m highlighting six K-drama friendships that are the ultimate friendship goals. These woman uplift, support, and are loyal to each other, especially when it comes to boys, giving female viewers a whole different set of feels.

1. Kim Hye Jin and Min Ha Ri from “She Was Pretty”

Even though I’m not ranking the friendships, if I were to, Kim Hye Jin (Hwang Jung Eum) and Min Ha Ri’s (Koh Joon Hee) from “She Was Pretty” would come on top. While they had a rocky period when Ha Ri was secretly dating Hye Jin’s first love Ji Sung Joon (Park Seo Joon) — which is a huge if not the no-no in girl code — it is the latter part of their relationship and everything else aside from this incident what makes it great.

Both girls saw each other as family — as sisters — not just friends. Ha Ri practically supported Hye Jin when she was down on her luck and Hye Jin’s family saw Ha Ri as their third daughter, having her over all the time and the parents being genuinely concerned over her. However, the crucial part in their friendship which made it remarkable is how Hye Jin reacted when she found out Ha Ri was dating Sung Joon while passing off as her. She didn’t go ballistic on her, which, honestly, is what a lot of us would’ve done. Instead, she wanted to wait until Ha Ri told her herself. Hye Jin never acted cold or distant or even resentful towards Ha Ri, even after Ha Ri came clean. Hye Jin was even willing to renounce Sung Joon because her best friend had feelings for him. Similarly, at Ha Ri’s birthday party, she blew off her male friends for Hye Jin. If that’s not the true meaning of “sisters before misters,” I don’t know what is.

Moreover, Ha Ri and Hye Jin had the cutest relationship, funnily acting as husband and wife; they always put each other before anyone else and caring about the other’s well-being. And who can forget about when Ha Ri decided to go back to school and Hye Jin was going to move away for a new job, the mini party they had where they sang, and danced, and ended up crying together over how much they were going to miss each other? Without a doubt, these two’s relationship is one we can all look up to.

Another friendship which a lot of us can relate to if your best friend is into K-pop is Si Won (APink’s Jung Eunji) and Jong Mi’s (Shin So Yul) from “Reply 1997.” These two were not only friends, but accomplices, stanning the same boy group, H.O.T. They went to events and even stalked their idols together. 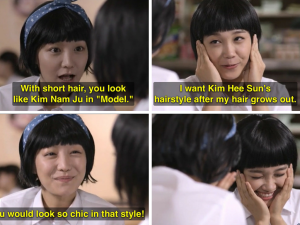 Of course, like any friendship, they both had their hiccups and became estranged when Jong Mi changed fandoms, but like the previous entry, let’s focus on all the good stuff. The prime example of how deep these girls’ dedication for each other ran, let’s revisit the incident when Si Won’s dad cut her hair for going to a show and being caught on camera. Jong Mi, the ever ride or die, chopped off her hair on her own in solidarity. Who can honestly say they’d do that for their best friend? Exactly.

3. Kim Hyun Sook and An Jong Mi from “Unkind Women”

Awesome girl friendships are not reserved for the youth. And probably one of the best relationships between adult women was presented in “Unkind Women” with Chae Shi Ra and Kim Hye Eun’s characters, Hyun Sook and Jong Mi, respectively.

Like the “Reply 1997” girls, these two were friends since a very young age and the ultimate accomplices. Jong Mi was the Robin to Hyun Sook’s Batman, always with her to back her up and support her, whether it was morally or economically. But most importantly, Jong Mi stuck by Hyun Sook’s side through all her hardships, which if you saw the drama, you know how much she endured! She was down for whatever when it came to her best friend. Lend Hyun Sook clothes so she’ll look sharp? Sure. Stand up for her when someone insults her? Always. 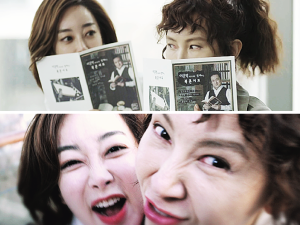 Hyun Sook and Jong Mi are the perfect example of how growing up and having separate lives doesn’t mean you have to let go of your friends and your loyalties to them. Also, how even if you’re in your 40’s, you can still mess around and be goofy with your best friend.

4. Yoon Se Na and Joo Hong from “My Lovely Girl”

Speaking of women who help out their girlfriends when they most need it, we also saw a good example of this on “My Lovely Girl” when Joo Hong (Lee Cho Hee) helped out her friend Yoon Se Na (f(x)’s Krystal) when she moved to Seoul in hopes of becoming a music writer. A good friend offers you their home for a few days while you look for a place to stay. A best friend let’s you move in with her and her boyfriend, even if they don’t have any privacy anymore, as long as you need it. That’s exactly what Joo Hong did for Se Na.

For most of the drama, Se Na was down on her luck with moving to Seoul, having no family to rely on, and struggling to achieve her dream. Her friend Joo Hong did not have it made and her boyfriend didn’t really dig having Se Na around for that long. But still, Joo Hong helped Se Na out and even got emotional when she ultimately left. 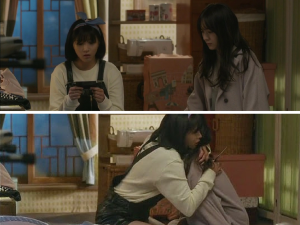 It is during difficult times that one finds out who their real friends are, and Joo Hong was just that for Se Na. Instead of putting her boyfriend before all else and keep him happy, she chose friendship first and still found a way to balance both of her relationships.

Perhaps one of the best friendships on K-drama to ever be portrayed was Soon Ok (Kim Hye Ja) and Mo Ran’s (Jang Min Hee) from “Unkind Women” because of how it came about and the progressive commentary it offers on women and friendship. Female characters and the relationships between them are often lazily written to always revolve around male love interests and the pettiness and cruelty is can arise in women because of it. That would’ve been the go-to scenario for these characters, given that Soon Ok’s husband left her for Mo Ran. Throughout most of the beginning of the drama, we see Soon Ok resentfully messing with Mo Ran, and who can blame her, right?

Well, it turned out the husband’s love for Mo Ran was one sided. Mo Ran never reciprocated the affection; her only fault has relying on her oppa too much. It took a lot of time, and Mo Ran endured a lot of sxxt from Soon Ok graciously, but they ultimately became the best of friends. They developed a really cute relationship that was playfully love-hate, with Soon Ok becoming an unnie to Mo Ran, always pestering her to take care of her health after nursing her back to life. 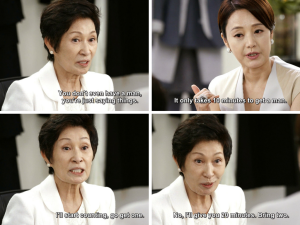 Soon Ok and Mo Ran’s friendship showed how complex relationships between women are. In dramas specifically, it’s too easy to pin women against each other when it comes to men. But “Unkind Women” was all about showing round characters and depth in their situations. Soon Ok and Mo Ran started out in the worst way and ended up upholding “sisters before misters,” even when Soon Ok’s husband came back into the picture.

In “Detectives of Seonam Girls’ High School,” the investigator squad formed by An Chae Yool (Jin Ji Hee), Yoon Mi Do (Kang Min Ah), Lee Yee Hee (Girl’s Day’s Hyeri), Kim Ha Jae (Lee Min Ji), and Choi Sung Yoon (Stephanie Lee) gave us not only friendship goals, but #SquadGoals. These high school girls were out trying to figure out and fix all the problems going on in their school, from creepy perverts to breaking the taboo of lesbian relationships.

While it may have started with a bit of deceit, Chae Yool ultimately gets into the investigations with her newfound friends. The gang is a great representation of positive female friendships with a quirky spin, with the whole “fighting crime” angle. The girls not only investigated the problems concerning them, but the ones with their peers, showing positive images of how compassionate and empathetic women are from a young age. And more importantly, they’re always there for each other.